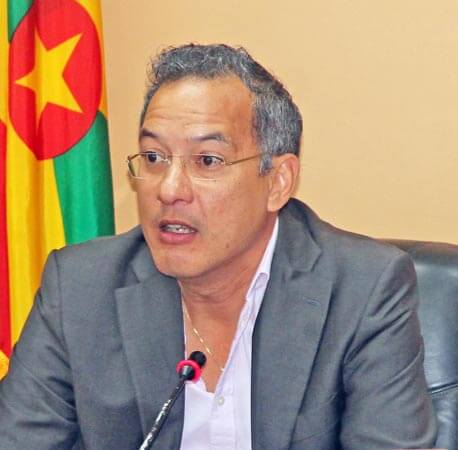 While getting vaccinated for COVID-19 is not mandatory in Grenada, the Ministry of Health has cited a need for all bus drivers and conductors, as well as frontline hospitality workers, and persons employed at facilities used as COVID-19 quarantine areas, to be inoculated to minimise risk of catching the deadly virus..

“I think it’s a discussion we need to have… the Ministry believes that this is a valid discussion to have,” said Health Minister Nickolas Steele during Wednesday’s post-Cabinet press briefing in St. George’s.

The senior government minister made the disclosure as he placed on record, the Grenada government’s support for similar initiatives being undertaken by the Dr. Ralph Gonsalves-led government in neighboring St. Vincent and the Grenadines.

He told reporters: “St. Vincent is saying, for instance, their bus drivers, if they are not vaccinated, then they would continue to have a reduced amount of passengers in their buses…We support this idea.”

The Health Minister expressed dissatisfaction with the low amount of persons who have taken the vaccine so far in Grenada.

Out of the 23, 500 doses of the India-manufactured Astrazeneca vaccine received from friendly countries, the Ministry of Health has only administered 8764 doses, mostly to adult and elderly populations, including persons over 65, and excluding persons under the age of 18.

Minister Steele made another appeal for Grenadians to get vaccinated against the virus which has been detected in just over 150 persons on the island in the past year.

“Those of us who are involved in frontline work, which is medical or hospitality should be vaccinated, otherwise, we are putting ourselves and the nation at an unreasonable risk,” he said.

“Discussions are also being held with frontline hospitality (sector), the quarantine sites that we are using, all individuals who are working at those quarantine sites should be vaccinated and the same discussion can be put forward with respect to supermarkets, banks and as St. Vincent is saying, the buses as well,” he added.

The Health Minister identified bus operators, as being among those who have the most interaction with members of the public during the course of the day and should see the need to be vaccinated.

“We want everyone to be vaccinated but what we are seeing are individuals who are interacting with more persons in public than the rest of us. So, I would get on a bus but I would only be on that bus with the individuals for that trip I make but the bus driver and the conductor are going to be on the bus all day picking up everybody…so they are putting themselves at much greater risk and as such, they should be vaccinated in order to ensure their safety and the safety of all of their passengers,” he remarked.

Bus drivers in Grenada are currently operating at full seating capacity unlike the early days of the coronavirus pandemic when few persons were allowed on the buses.

When contacted on this developing issue on Wednesday, Public Relations Officer (PRO) of the National Bus Association (NBA), Derek McKenzie, told THE NEW TODAY that inoculation would have to be an individual decision on the part of the bus owners and operators.

“That is a personal decision that operators would have to make with their families on an individual basis. If operators feel comfortable that they want to take it (the vaccine) that is up to them and that is basically our (the NBA’s) stance on that,” he said.

A former President of the Grand Anse Bus Owners Association (GABOA), McKenzie’s personal take on the issue is that “there are many vaccines out there,” and persons may have preferences as to which one they would want to use.

“The only one that is available to us in Grenada at this time and that is the Astrazeneca (but) people would have a different preference in terms of vaccines. There is the (Johnson & Johnson) among others (and) personally, I don’t think that one particular type of vaccine should be forced on persons.

“If people have choices, they would probably choose which one they feel comfortable with. Some people would probably want the (Johnson & Johnson) vaccine and get that (prick) once and I think there are different percentages of effectiveness with those vaccines. So, I think that is something that would have to be discussed as the way forward.

However, he acknowledged that it might be “a very late possible delivery” for these other vaccines and that the Johnson and Johnson brand might become available “as late as July or August, which in our opinion is going to be too late”.

“So, that is why we are focusing on AstraZeneca, which is to date, the most widely used throughout the world,” he said.

The Health Minister announced that Grenada is in line to receive “another 40, 000 doses of Astrazeneca to arrive within the next two or three weeks from Pan American Health Organisation (PAHO).”

Minister Steele reiterated that government would not use any vaccine that is not approved by the World Health Organisation (WHO) or one of the accredited agencies such as the Center for Disease Control and Prevention (CDC) in the United States, Public Health Canada, UK National Health Service (NHS) and the European Medicines Agency (EMA).