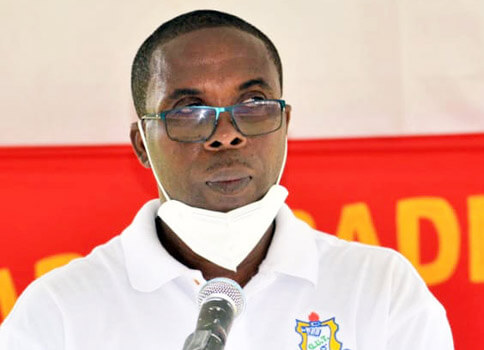 The President of the Grenada Union of Teachers (GUT), Jude Bartholomew has launched a most vicious attack on the 5-member committee set up by government to provide it with recommendations on the way forward in light of the recent high court ruling against the State and in favour of public sector employees on Pension.

Addressing the annual Labour Day celebrations held at the national stadium at Queen’s Park on Sunday, Bartholomew told workers that it is the intention of the GUT to ignore the committee and instead press ahead with its demands to get government to set the date for the start of the roll out of pension money to those who are qualified for the financial package.

He said the teacher’s bargaining unit has no confidence in the Chairman of the Pension Advisory body, Dr. Linus Spencer Thomas, as well as fellow committee member, Dr. Patrick Antoine, the founder of the beleaguered small political party known as The Grenada Movement (TGM).

Describing Dr. Thomas, head of the TAMCC governing council as “a decent and honourable man”, the GUT boss noted that up to this day he has not been able to solve a number of matters at the island’s sole tertiary institution affecting workers like Pension, the Collective bargaining agreement and salaries existing for 10 years and expressed grave doubts about his ability to delve into the Pension owed to public sector employees.

“Today he is coming now to solve pensions for teachers and public officers – no way,” he told cheering workers.

The GUT President also slammed Dr. Antoine who has resurfaced publicly in recent days to play a role on the Advisory Committee after announcing a few weeks ago that he had to take a back seat from TGM due to ill health.

“I am very disappointed in Dr. Antoine. I was looking forward to him to become the next Prime Minister of Grenada – he couldn’t solve the problem of getting enough representatives for TGM to contest the upcoming election but he’s coming now to solve pension when the judge solved it already – no way,” he said.

TGM, which was launched about eight months ago, has announced that it will not field candidates in the upcoming general elections.

Bartholomew warned the Mitchell government that it might be forced to pay a heavy price on Election Day based on its handling of the Pension payment issue.

Pundits are predicting that the election can be held as early as June 13-21 as the Parliamentary Elections Office (PEO) has started to call in its election day workers for a briefing on the holding of the national poll.

The GUT boss, a prominent member of the Roman Catholic Church in St David, also launched a scathing attack on those religious groups, along with members of the private sector, and other representative bodies serving on the Social Partners grouping to now label them as “the NNP Partners.”

He recalled that when public sector employees took industrial action on the same Pension issue in 2019 and their salaries were docked for one month by Prime Minister Mitchell, the Social Grouping body never gave them any support.

“Today, the court ruled in our favour they (Social Partners) come back on the scene again to regulate it now – tell them the Grenada Union of Teachers say no way.”

Within days of the ruling by high court judge Justice Raulston Glasgow against the State on Pension, Prime Minister Mitchell convened a meeting of the Social Grouping to discuss the implications that the payment of millions in outstanding pension payments will have on the Treasury and the local economy.

Bartholomew also had a special word of advice to the churches on the island.

“…We are watching you – we are the ones that attend your church services and build your ministries – and if you aid in denying us of our pension, workers are going to aid in denying you of your collection. Brothers and sisters, no pension, no collection,” he said.

According to the GUT President, the public sector unions do not have to heed the call from government for a sit down meeting in order to sort out the Pension payment issue.

“We stand firm on the pension issue and we shall never waver. Brothers and sisters we don’t have to meet for the government to pay any pension. This pension is a constitutional matter and the judge has ruled in our favour and that is the order and the law of the land,” he said.

Bartholomew stressed that when the island attained its independence from Great Britain in 1974, the fact of the matter is that “the white” colonial masters along with the Father of Independence, Sir Eric Gairy ensured that Pension was put in the Grenada Constitution and it is said that “the black people” in the NNP regime want to take it away.

He warned that no government, committee or Social Partners grouping is going to deny the teachers their constitutionally due pension as upheld by the high court.

“It is quite evident that this NNP administration doesn’t like teachers and public officers and is trying everything in their powers to deny workers their benefits,” he said.

He pointed out that the ruling from high court judge Justice Glasgow was clear and questioned the move behind the government’s decision to set up the committee to look at pensions owed to its membership.

“The Pension bell is right around the corner and the payment must begin now,” he remarked.

According to Bartholomew, this is the most important matter on the national agenda with general elections imminent.

He described the Keith Mitchell-led ruling New National Party (NNP) administration as the most anti-worker government in the history of the country.

He called on workers to use the Labour Day activity to reflect on the “vindictiveness, wickedness, oppressiveness of this anti-worker administration” running the country from the Botanical Gardens at Tanteen, St. George.

The teachers’ boss also called for government to take decisive action and bring an end to the untenable situation in which workers who serve as teachers, doctors and other sections of the public sector are forced to work without a permanent contract.

He warned that if the Mitchell regime does not take action to address the issue then it can rest assured that “they are going to hear from our index finger” on Election Day.

Bartholomew called on workers throughout the island to urge the government “to restore pension before you vote for them because when they restore pension they are restoring your future.”

THE NEW TODAY understands that GUT is willing to ignore the advisory committee on Pension and go it alone in its demand for the Mitchell government to start paying monies to its members.