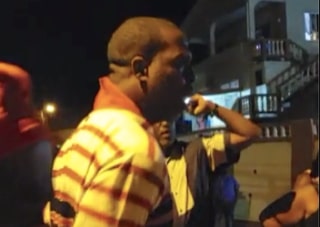 I think that the government has made a big mistake.

Those were the words used by newly elected President of the Grenada Union of Teachers (GUT), Jude Bartholomew minutes after he walked out of the St. David’s Police Station Saturday night after he was interrogated in what is believed to be a criminal investigation being carried out against him by the Royal Grenada Police Force (RGPF).

Bartholomew was called in for questioning by members of the Criminal Investigation Department (CID) of the police force in connection with an alleged breach of COVID-19 protocols during the April 7 protest in St. George’s by teachers over the 4% salary and wage increase issue.

Flanked by the leaders of three other unions – Senator Andre Lewis of the Technical & Allied Workers Union (TAWU), George Mason of the Commercial & Industrial Workers Union (CIWU) and Brian Grimes of the Public Workers Union (PWU), the new teachers’ boss and an estimated 60 supporters walked from the station to the entrance of the nearby Belle Vue playing field as a show of defiance in what they see as an attempt by the Keith Mitchell-led administration to intimidate the unions in the ongoing 4% battle.

Several teachers made their way to the St. David’s Police Station when word surfaced on Social Media that their leader was inside the police precinct for interrogation.

Bartholomew was kept at the station for approximately three hours as he was questioned mainly by Inspector Terrence Mason and Sergeant Tyson Greenidge of CID main office in the city.

When he was released around 8.00 p.m. to a crowd of waiting supporters, whom he led on the march to Belle Vue junction, he then briefed them on what had transpired earlier in the day and said he wanted to send out a clear message that he will “not be intimidated.”

“This is the most proud moment in my life,” the GUT boss said to the cheering crowd of supporters, adding that it is in times like these “that we have to stay firm” in the fight for the 4%.

“That would never shake me,” he declared.

In an exclusive interview with THE NEW TODAY after addressing the gathering, Bartholomew indicated that it was just after 3.00 p.m. when three senior police officers clad in plain clothes showed up at his home in Pomme Rose, St. David, requesting that he accompany them to Police Headquarters at Fort George, St. George’s for questioning.

“They wanted me to come down to Fort George immediately, and I said that I would not,” the GUT boss said because he was at the time supervising his children.

THE NEW TODAY understands that the police officers agreed for him to meet them at the St. David’s Police Station half an hour later to conduct the interview.

Although he described the police interview as “peaceful,” Bartholomew said he formed the opinion that they were “gathering smart information,” in what he branded as a “strange phenomenon that is taking place in the country.”

“They were just profiling, seeking certain information and there were certain questions that I did not answer because I did not have my lawyer,” he said, noting that they seemed to be interested in “trying to build a case” against him on the protest issue.

“They did ask if we got permission (to stage the protest) and I said yes, and that we did follow and instruct our members to follow the COVID-19 protocols, “ he told the CID officers, and also reminded them that “there were senior police officers at the Stadium (on April 7), who congratulated us in terms of our following the instructions, letting the teachers know the protocols” before they marched up to the Botanical Gardens, armed with their placards, and with solidarity from other public sector unions in demanding their salary increases.

Commissioner of Police, Edvin Martin had warned after the street protest that the police would take “swift and decisive action” against the protestors for violating Covid-19 protocols.

Bartholomew described the action taken against him on Saturday as “highhandedness” on the part of the state and was amounting to “intimidation because they find that we are probably making inroads in terms of our demands for the 4%”.

“And it may be because I am a young person who just take over the reign of the GUT so, probably they think that by doing so (detaining me for questioning), they could intimidate me but they would not succeed”.

“I think that the government has made a big mistake because if they thought they were doing that to intimidate and to make us keep quiet, what they have done is raise up an ant’s nest because in less than no time, teachers would have reached in St. David’s from every part of Grenada”.

“…What is even more interesting and fascinating, is that they even marched from the very police station that I was called in to, to Belle Vue (junction) and in fact, I am proud as a young leader, of what would have happened because it has encouraged and motivated me and what is even more overwhelming, is that I was never alone, the teachers came and other union leaders came and they stood side by side marching along in solidarity.”

The GUT boss also recalled the failure of RGPF to take action against those persons who were violating the same Covid-19 protocols during the recent official funeral on the sister isle of Carriacou for late deputy Prime Minister Elvin Nimrod.

Sen. Lewis who is also the President of the Grenada Trade Union Council (GTUC) told THE NEW TODAY that this was a “deliberate ploy by government to intimidate the leaders of this country in relation to the workers’ struggle for the 4% and other benefits, but would only spur more reactions and mass demonstrations.”

“We have marched from the police station as a clear indication to the authorities that they shall not intimidate or weaken us,” he said.

Acting Political Leader of the main opposition National Democratic Congress (NDC), Adrian Thomas, who was also among the gathering, agreed with the position adopted by the union leaders that the turn of events was a “demonstration of government’s strategy to create some form of fear in this country.”

“It’s a terrible sign,” he said, pointing out that “the vast majority of people in this country are in agreement that the government must pay the full 4% due to teachers and public sector workers.

“The government need to take heed and listen to the voice of the workers…and if the teachers are demonstrating for that (the 4%), there is no need for the police to go to the house door of the leadership of the union and ask him to report to the police station to be questioned in terms of the COVID-19 protocols in terms of the demonstrations that they have had,” he remarked.

Thomas added that “the teachers are entitled to the 4%, which was negotiated since 2017 and as such “the government should really consider that.”