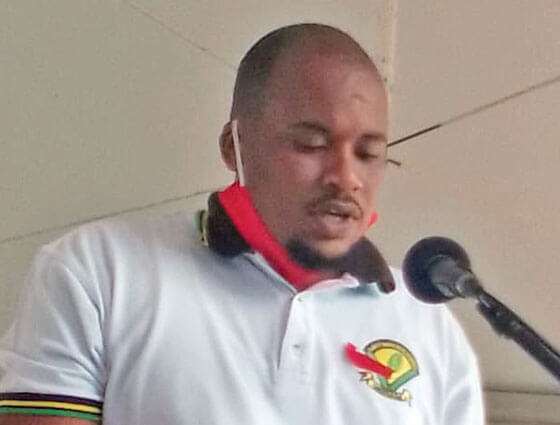 Brian Grimes – delivered a hard-hitting attack on the current rulers

This is the most anti-worker government in the history of Grenada.

In his maiden address at the annual Labour Day march and parade, Grimes told a small gathering of workers due to limitations on large gatherings as a result of Covid-19 that this will be the legacy left behind by Dr. Mitchell who has dominated the political landscape of Grenada for the better part of 25 years.

He said the regime has “ruthlessly docked our salaries” and have made contract work in the public service their trademark.

He charged that nurses and public officers are forced to suffer the indignity of one and two year contracts while there are permanent jobs in the Estimates to be filled.

Grimes accused the Mitchell-led government of putting its knees on the necks of public officers as if to stifle them to death.

“We are looking for an ease so that we can breathe again,” he said.

The new PWU president told his members that the challenges that lie ahead are many but rest assured that “in me you have a leader who will fight to the finish for the realisation and the elevation of our rights.”

Saying that “the journey might be long and rugged, Grimes fired a shot at the Mitchell-led government which broke its promise to pay public sector employees an agreed 4% increase in their salaries that should have taken effect from the end of January based on a signed agreement.

“We demand that the authorities release our 4% from the walls of the Parliament at Mt. Wheldale. We are the ones who labour in the vineyard to keep our country afloat. We want justice and we want the respect that is due to us”, he told workers.

This is seen as a clear and open attack on the type of foreign investors brought into the country by the Mitchell-led government through its controversial passport-selling scheme known as Citizenship By Investment (CBI).

Many of the employees at CBI establishments have not been allowed to become unionised and in one particular case an investor was allowed to walk away with an estimated EC$54.2 million for the failed Shrimp farm project in Victoria, St. Mark.

There are also reports of some CBI investors selling more passports than the cost of the approved project and pocketing the extra millions for themselves.

Grimes attacked the practice of the Mitchell-led government to promote contract work in the public sector as “the single most destructive weapon unleashed upon the Grenadian work force in the last 25 years”.

Turning to Labour Minister Peter David who shared the platform with labour leaders at the national stadium at Queen’s Park, Grimes said the message being directed at him by the Working Class is that when government handed him the Labour portfolio following the 2018 general election, they had high hope in him given his revolutionary background with the 1979-83 People’s Revolutionary Government (PRG).

David has served as Deputy Secretary for Information in the government before it collapsed in a power struggle when a radical faction led by former Deputy Prime Minister Bernard Coard moved against then Prime Minister Maurice Bishop who was killed on Fort George on October 19, 1983.

According to Grimes, the workers in Grenada were excited as they saw “Brother Peter” as a man who knows about “social justice”, as well as someone who would ensure that contract work became a thing of the past, and that he would stand up in meetings of the Cabinet of Ministers and speak on their behalf and to help them in their battle on the 4% salary issue.

Labour Commissioner, Cyrus Griffith has declared the current impasse between government and three public sector unions as “deadlocked” and has referred the matter to Minister David for Mediation.

Grimes stressed that politicians who become part of the government-of the-day are allowed to benefit from a state pension after serving only 8 years in office along with a gratuity payment.

However, he said that many public officers are forced to go home “broken-hearted” and without any money after giving government many years of service.

‘I have observed for the past 20 years that my Comrades in the public service after giving 30 years of blood, sweat and tears – sometimes more to the nation – have to face a depressing and shameful exit and have nothing to get when they leave – how sad!!!

Grimes criticised what he said was the attempt by government to detain “our leaders” as he made specific reference to the interrogation of President of the Grenada Union of Teachers (GUT), Jude Bartholomew two weeks ago for questioning on alleged violation of Covid-19 Social Distancing regulations, in leading teachers in their 4% street protest marches.

“My friends, this abuse must stop,” Grimes told the small gathering.