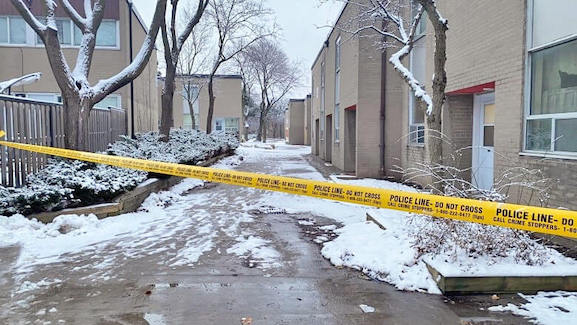 Police say they responded to reports of a shooting in the area of Grandravine Drive and Driftwood Avenue at 9:37 p.m. on Thursday (Ryan Jones/CBC News)

Hagley, who migrated to Canada a few years ago was found dead at about 9:37 p.m. by police officers who were called to the area around a townhouse at Grandravine Drive and Driftwood Avenue following reports of a shooting.

According to reports in the Canadian media, the lawmen arrived to find a man suffering from life-threatening gunshot wounds and he was pronounced dead at the scene.

Hagley’s family members in Grenada on Wednesday night held a prayer session for him at their home in Mardi Gras in-keeping with Christian traditions.

Detectives in Canada have issued an appeal to “any witnesses or those with dashcam or security camera footage of the area to contact them at 416-808-7400”.

“Anyone with information is asked to contact police or Crime Stoppers anonymously,” said one media report.

Hagley’s murder is Toronto’s 82nd homicide of the year.