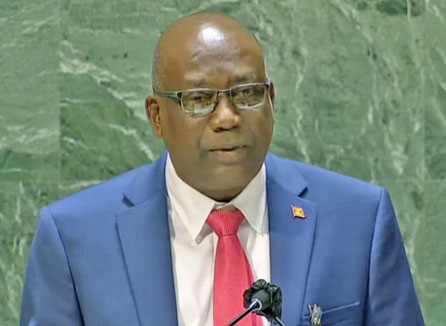 Min. Joseph as he addressed the 76th Session of the United Nations General Assembly in New York on Monday

While the Grenadian economy is projected to recover this year from a massive decline due to the socio-economic impact of the coronavirus pandemic, growth in real Gross Domestic Product (GDP) will be slower than the anticipated 6% announced in the 2021 Estimates of Revenue and Expenditure by Finance Minister Gregory Bowen last December.

According to information released by the Ministry of Finance last week Friday, days ahead of the National Budget Consultation for the fiscal year 2022, “at this juncture, real GDP is now projected to grow at 4.5%.”

An economic update on the performance of this year’s EC$1, 232, 670, 049.00 Budget, shows that sectors such as construction, wholesale and retail trade, which were initially identified to drive the return to positive economic growth, have been on a downward trajectory, with construction declining by “7.4%,” and wholesale and retail trade by “9.8%,” during the first half of the year.

Additionally, the document said, the “hotel and restaurant sector declined by 96.4%, mining and quarrying 5.7%, electricity and water 7.9%, transport and communication 22.5%, real estate 2.4%, and business services 12.9%, contributing to a negative 13.32% towards the overall performance.”

The impact of COVID-19 on the local economy was among issues highlighted by Minister for Foreign Affairs, International Business, CARICOM Affairs Oliver Joseph, when he addressed the 76th Session of the United Nations General Assembly (UNGA 76) in New York on Monday.

The senior government minister issued a call for global unity in addressing the spread of COVID-19 through the adoption of a “One Health Agenda, at the Global level, an approach that recognises the connection between well-being, prosperity and a healthy environment.”

He stressed the “reclassification of our status by the Organisation for Economic Cooperation and Development (OECD) Development Assistant Committee (DAC),” which he said, has resulted in the marginalisation of the quantum of development assistance to the region.

“This is problematic,” he said, as he urged “advocacy and support from organisations, including those under the umbrella of the United Nations in the dismantling of these unfair rulings.”

In February 2021, the United Nations Development Programme (UNDP) published a paper entitled: “Towards a Multidimensional Vulnerability Index” which states that SIDS face severe structural challenges due to their remoteness, economic concentration, and dependence on external flows such as remittances, foreign direct investment, and tourism revenue.

And while the paper constructs a Multidimensional Vulnerability Index (MVI) to account for both long-term structural vulnerabilities as well as the recent weaknesses uncovered by the pandemic, using 11 indicators for 128 countries, including 34 Small Island developing States (SIDS), the MVI demonstrates that all but five (5) SIDS are far more vulnerable than their income level would suggest.

According to the paper, while the Covid-19 pandemic has greatly exacerbated these vulnerabilities by restricting travel, collapsing investment and tourism, and weakening the economies from which remittances are sent, most SIDS are still not eligible for concessional financing due to their classification as middle or high-income countries.

Under the classification, the world’s Middle-Income Countries are defined as having a per capita gross national income of US$1,026 to $12,475. Grenada and most other CARICOM member states are classified as upper-middle-income countries.

The Grenada Minister used the occasion of the UNGA 76, to call for “advocacy where international financial institutions are concerned to allow us (CARICOM), to face these challenges posed by the pandemic, and regain access to concessional financing”.

To further emphasise his call, Minister Joseph reiterated that “economic data such as Gross Domestic Product per capita does not reflect the true nature of the vulnerability of Caribbean States.”

Pointing to the loss of “14, 000 jobs as a direct consequence of the pandemic,” which accounts for an almost doubling of the unemployment rate from its “historic low of 15.1% at the end of 2019 to 28.4% at the end of the second quarter of 2020,” a contraction in the local economy by “13.7 in 2020, and stark decline in several sectors, most notable in tourism, and air transport,” according to preliminary estimates, the Minister suggested that the new format be “completed and adopted no later than by the end of 2022.”

Minister Joseph pointed out that the Grenadian economy had been on an “upward trajectory since 2013, growing at an average rate of 4.5% per year.”

However, he noted that this growth, which was “mainly driven by robust activities in the construction, tourism, and private education sectors…was disrupted by the pandemic,” which has led to “especially severe” consequences for vulnerable groups, “particularly women, youth, and the unskilled, who are over-represented in the tourism and informal sectors which were hardest hit by the pandemic…”

And while the coronavirus pandemic has wreaked immense havoc on economies across the world, he stressed that it has had “particular intensity and lasting effect on small economies like ours (within CARICOM).”

Speaking on the significance of the UNGA 76 theme: “Building Resilience through hope to recover from COVID-19, rebuild sustainably, respond to the needs of the planet, respect the rights of people, and revitalise the United Nations, Min. Joseph also called for global unity in addressing the spread of COVID-19 through the adoption of a “One Health Agenda, at the Global level, an approach that recognises the connection between, well-being prosperity and a healthy environment.”

He said that “16 months after the first COVID-19 case was recorded on island, the local economy continues to experience the lingering effects…”

According to data from the Ministry of Finance, while “revenue collections for the first six (6) months of the year have been broadly on track with targets, and are slightly ahead of collections for the corresponding period of last year, grants receipts, including from the NTF (National Transformation Fund), on which the 2021 Budget is largely hinged, is underperforming.”

Minister Joseph informed the UN assembly that the top priorities in preparation for the Estimates of Revenue and Expenditure for 2022 will be based on government’s strategic policy agenda for recovery, transformation and resilience and pointed to signs of improvement in the economy, especially in the tourism industry.