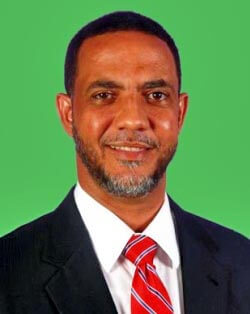 Where did the New National Party (NNP) government of Prime Minister Dr. Keith Mitchell get the funds needed to repurchase the 72% majority shares in Grenlec from the Florida-based WRB Enterprises?

This is the million dollar question still etched on the minds of many Grenadians, even after a virtual press conference last week Wednesday, in which Finance Minister Gregory Bowen and Foreign Affairs Minister, Oliver Joseph attempted to convince the nation that the US$63M used to purchase the majority stake in the utility company, came from monies not used for Capital spending in the 2020 budget.

However, the administration may have been caught wanting on the WRB settlement, as 2020 figures reflect that savings on Capital Expenditure was not enough to make up the US$63 needed to repurchase the Grenlec shares.

Addressing this issue during a virtual Press brief on Monday, Deputy Chairman of the main opposition National Democratic Congress (NDC), Kennedy Roberts pointed out that “in terms of the Capital budget that was presented in 2020, and again reflected in the 2021 estimates, it shows that there was a total of EC$225.3M budgeted to be spent on Capital programmes of which EC$122M was actually spent, leaving a balance of EC$103M which is significantly less than the US$60M used to pay WRB.

Roberts contended that even though there were several things budgeted for under the 2020 Capital budget that did not come to fruition, “you cannot get more than EC$130M of unspent funds.”

“The government must have received that additional monies from somewhere and it must be reflective somewhere in the budget…based on the information presented in the 2020 and 2021 budget, there is no way that the government could have used or moved around money and this is just a blatant manner of telling the Grenadian people that they don’t think we can seriously analyse issues,” he said.

Roberts called on the regime “to come clean with the Grenadian people,” on the Grenlec settlement, pointing out that “the Capital budget that has been referred to by the two ministers as the basis to getting monies to spend on paying (for) Grenlec is totally false (and) there is nothing in how the monies were allocated in the 2021 budget that would say otherwise.”

“So soon after the presentation of the 2021 budget, where we have access to the information from the 2020 budget, for the two ministers to come and provide the impression that the monies paid to Grenlec came from the Capital budget and they had the authority to spend it, it’s again showing that they are not in tune with reality (and) are creating the alterative facts,” he said.

“…Every budget cycle runs from January 1st to December 31st – the monies saved or spent from one year to another is not transferred automatically but must be approved by the Parliament in a new form every year,” he added.

The NDC Chairman considers this as an act of “blatant disrespect” on the part of the NNP government to the Grenadian people in light of the fact that the “government cannot touch the monies without Parliamentary approval.”

He scoffed at Minister Bowen’s remarks that prudent fiscal management over several years by the regime has allowed the government to achieve the millions of dollars in savings needed to pay WRB for the Grenlec shares.

When probed by reporters, members of the NDC panel, which also included Public Relations Officer, Claudette Joseph, and Caretaker for St. Andrew North-west, Phillip Alexander declined to speculate reasons why the NNP administration may be withholding information surrounding the source of the Grenlec money.

In an earlier interview with THE NEW TODAY on the Grenlec saga, Leader of Her Majesty’s Opposition, Tobias Clement expressed similar sentiments, highlighting the importance of having printed budget statements on hand for the purpose of cross checking as opposed to using digitised copies, which can be a bit more complicated.

Clement said: “It’s very important that you go back to the 2020 budget document to make the comparison that yes indeed they budgeted $EC225.3M but what they are saying is that they spent $122.1M. So, it means that they have a balance of $103.2M but US$63M is not equivalent to that…they shortfall by about US$60-70M with what they saved on Capital Expenditure – so where did they get the rest of money to make up the US$63M?

“What this is showing is that the ministers did not tell the nation the complete truth because the money from Capital Expenditure that was not used is not enough,” he added.