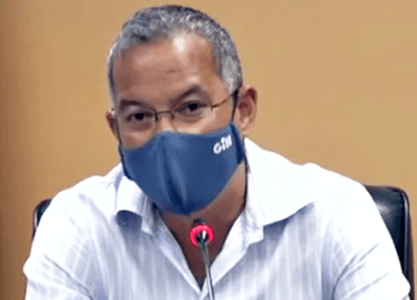 Approximately three (3) weeks after removing the quarantine requirement for fully vaccinated arriving passengers in anticipation of increased activity at the Maurice Bishop International Airport (MBIA) amidst the coronavirus pandemic, the Grenada government has decided to revert to PCR testing upon arrival at the airport, due to the threat posed by the newest strain of the deadly virus, Omicron.

According to Health and Social Security Minister, Nickolas Steele, the Cabinet has decided “to start back testing on arrival (at MBIA) but not quarantine” as a precautionary measure, due to the “Omicron threat, as well as the spikes that we are seeing in the region.”

“We are observing what is happening with Omicron, and we are observing in terms of spikes or waves that we are seeing in other islands…we are monitoring,” the minister told reporters on Tuesday at the weekly post-Cabinet media briefing in St. George’s.

The Omicron, which was first discovered in South Africa last month has since spread to several countries in Europe, which is a major tourist source market for Grenada.

Minister Steele disclosed that although fully vaccinated “individuals will be PCR-tested on arrival to MBIA” and if the test is positive “we will isolate them, and whoever they have been in contact with.”

He acknowledged that there is a risk factor involved in this method but “the alternative is to keep everyone waiting 12 hours” until their results are made known to them.

Minister Steele reiterated the government position that the 7-day quarantine protocol remains in effect for unvaccinated citizens travelling to the island.

COVID-19, which was first imported into the island in March 2020, has since claimed the lives of about 200 individuals, the majority of which has been attributed to the highly contagious Delta variant that was detected during the August spike in cases.

Since then, several restrictive measures have been enforced under a State Emergency to get the situation under control, and the Ministry of Health has been consistently reporting reduced positivity rates.

Minister Steele also told reporters at the press briefing that within the next two (2) weeks, Grenada will have the capacity to test for different COVID-19 variants after the commissioning of two sequencing machines.

“Within the next week, and a half to two (2) weeks maximum…we (the Ministry of Health) would have the availability here in Grenada to do sequencing, to be able to identify the variants…strengthening our health system, and preparing for Omicron, or any of the other threats that may come up from COVID-19,” he said.

Currently, COVID-19 samples are being sent to the Trinidad-based Caribbean Public Health Agency (CARPHA) for verification.

According to Minister Steele, although “we will also be doing our sequencing here, we will still send samples down to CARPHA for verification”.

“So, we get double verification of the presence of any of the variants…So, in effect, there are three (3) sets of tests that will be done on any sample of concern, at the St. George’s General Hospital, St. George’s University (SGU), and CARPHA,” he added.

The Health Minister’s announcement came approximately two (2) weeks after a ban on passengers with a travel history in the last 14 days to South Africa, Namibia, Zimbabwe, Botswana, Lesotho, and Eswatini, was imposed by the Keith Mitchell-led government at the Botanical Gardens.

It followed closely on the heels of a warning issued by the World Health Organisation (WHO) of the “high risk” posed by Omicron, as scientists caution that it is still unclear whether this variant is more dangerous than other versions of COVID-19 that has killed more than five (5) million people worldwide.