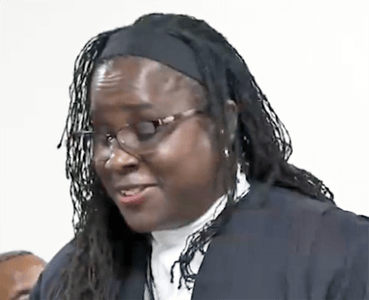 As the new Congress government of Prime Minister Dickon Mitchell moves to establish a fully digitised court system to enhance the delivery of Justice in the judiciary, legal practitioners are being urged to move all live matters on to the e-litigation portal.

This was put forward by Attorney General, Minister for Legal Affairs and Labour Senator Claudette Joseph Tuesday in an address to mark the opening of the New Law Year at a special virtual sitting of the Eastern Caribbean Supreme Court (ECSC) in St. George’s.

“We at the government level are encouraging practitioners to move all live matters onto the e-litigation portal, and the rules allow for this to be done by consent of the parties because we are moving to a fully digitised operation,” she told the ceremony.

The Eastern Caribbean Supreme Court rolled out its Electronic Litigation Portal (E-Litigation Portal) in 2018, which is designed to serve as a platform to improve the delivery of justice to the citizens of the region and to contribute substantially to increasing the transparency and efficiency of court services.

Grenada launched its leg of the e-litigation portal in 2021.

Delivering her New Law Year address, Chief Justice Dame Janice Pereira highlighted the completion of the first phase of the implementation of the E-portal, which is expected to “create a more resilient justice system.”

She said “the Court will soon be embarking on the second phase of implementation” which involves the “long awaited expansion of the portal to accommodate High Court criminal matters as well as proceedings filed in the Magistrate’s court.”

“This phase is pivotal to modernising the delivery of services offered by the Magistrate’s Court, which statistically handles the bulk of court cases…it is also a further step towards integration of the Magistracy into the higher judiciary,” the Chief Justice said.

“This process of integration must happen. Courts exist for the purpose of delivering justice. There should therefore be no distinctions or impairments, legally or otherwise in the realisation of this purpose, yet, impediments persist within our OECS region. It is time that this lack of progress for full implementation of the Magistracy be addressed once and for all,” she added.

Chief Justice Pereira explained that “uniquely crafted Rules” are in place to govern e-filing, and e-serving of documents in the Magistrate’s District Court, in a manner best suited to the summary nature of these courts.”

“I am heartened by the fact that the launch of the portal over the Magistracy has shown great promise for future delivery of court services based on the enthusiasm displayed by court staff and practitioners alike.”

“This phase of the portal’s implementation is therefore in my view a critically important step towards widening access to justice and would undeniably create a more resilient justice system.”

“It is my hope that this law year will see the implementation of the portal in the Magistrate’s Courts in the other six member states and territories.”

According to the Chief Justice, “the next stage of portal implementation will be the addition of the criminal case files at all levels of the judiciary.”

“When that happens, we will have completed the circle of linking the courts at all levels of the justice system. It is only then that we could feel some sense of satisfaction of attaining at least one of our goals in the digitisation process”, she said.

The Chief Justice emphasized that the Court is “actively pursuing” a “digital solution for the court transcription process which has been plagued with delays leading to highly undesirable results.”

This is an apparent reference to the Grenada situation in which convicted murderer Alexander Clack of Britain was set free last year by the Court of Appeal due to the unavailability of transcripts after serving only 8 of a 67-year sentence for killing his wife, Nixiann Downes-Clack.

The Chief Justice said that “specialised divisions are not merely desirable but necessary for increasing operational efficiency which will in turn improve customer satisfaction and build greater confidence in the justice system.”

She urged member states and territories to focus on “building the public’s perception of the Courts as not being a place but a service, and a place where justice is delivered and where they can seek justice.”

She renewed the call for “governments in the OECS to build proper purpose-built court facilities for delivering that service.”

She said that the new facility “will incorporate environmentally friendly, and renewable energy technology” and that the new government will “use the rest of this year to complete all preliminary works.”

Members of the legal fraternity turned out in their numbers to attend the Church Service at the St. George’s Cathedral to mark the opening of the New Law Year for the first time since the COVID-19 pandemic.

This, was followed by a procession to the High Court Building on Young Street, St. George, where the special court sitting was broadcast live in all member states and territories, from host country Anguilla.

The New Law Year was opened under the theme: “The Eastern Caribbean Supreme Court, navigating the changing tides.”