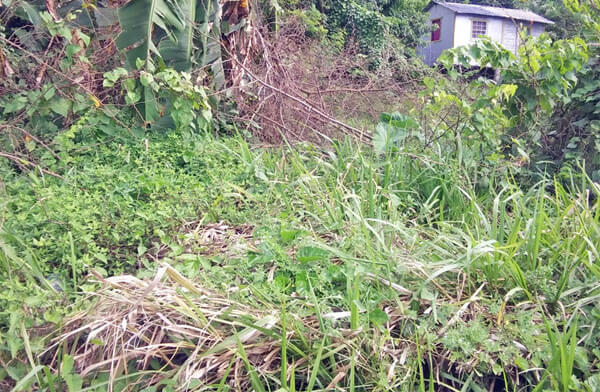 The parcel of Crown land at Beausejour in St. George North-West

Efforts are being made to rescind a deal for a parcel of government land in the St. George North-west constituency of Prime Minister Dr. Keith Mitchell with one of the two women involved in the sexual assault case brought against Cletus St. Paul, the former top Security Detail official around the Grenadian leader.

The 33-year old woman called THE NEW TODAY to report that a Government Land Surveyor telephoned her to indicate that a decision was taken at the government level for her to give back the land and to move elsewhere on State land.

According to the mother of four children, she is reluctant to give up the land that was already paid for as it will create a lot of difficulties for the children especially their schooling.

She said that the Land Surveyor indicated to her that he had been instructed by the Permanent Secretary in Lands that she will no longer be allowed by government to erect her house on the land as it was prone to flooding.

“He (Land Surveyor) said that he was instructed by the PS to call me to tell me that the area that I received is prone to flooding and that I need to move to either two locations – La Calhome or Munich. I told him that I have to think about it and I will call him back because it was a lot for me to take in all of a sudden,” she said.

“I called him back and asked – is it mandatory that I have to move or is it by choice – and he told me mandatory. So I say, well that doesn’t make any sense as I already paid for it (the land) so that should be my choice….either I want to move or I want to stay (there) and flood – that is my problem,” she added..

The woman indicated that the instructions were given to her by word of mouth by the Land Surveyor who also told her, “I have to make a decision fast”.

The mother is due to meet with an attorney-at-law this week to discuss the issue as she believes that someone is no longer interested in her staying in the constituency.

The woman had approached Prime Minister Mitchell for help and he instructed St. Paul to locate the parcel of land for her in Beausejour in order to help her out of a housing situation.

The woman’s male companion is said to have negotiated with a local credit union for a loan to purchase the land from the State.

It was on a visit to the land that St. Paul allegedly sexually assaulted the young woman who later filed a complaint with the Royal Grenada Police Force (RGPF).

St. Paul is alleged to have engaged in a struggle with the woman who had her baby in her hand before he used a finger to insert in her vagina.

The Preliminary Inquiry into the sexual assault case is due to start in February before a Magistrate’s Court in the city.