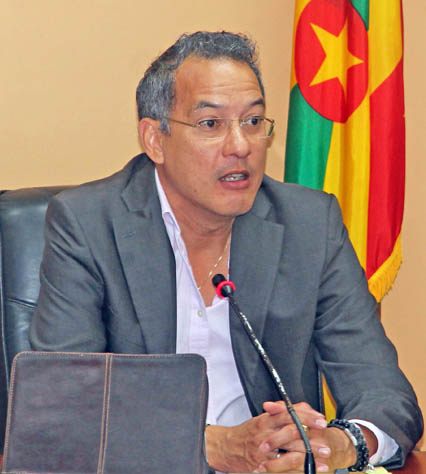 Health Minister Nicholas Steele has not confirmed or denied speculations that individuals onboard the aircraft carrying eight individuals that was turned away from the Maurice Bishop International Airport (MBIA) last week Monday were Chinese investors travelling on business to discuss the much talked about Belt and Road initiative.

The senior government minister was asked about the Chinese mission and their interest at the weekly held post-Cabinet press briefing held at the Ministerial Complex at the Botanical Gardens at Tanteen, St. George.

He said: “It matters not what the people were coming here to do (but) it’s whether they had a travel history from certain hot spots. We would turn them away based on their travel history.”

“If we start digging deeper, there were 3000 people (on a cruise ship) that we turned away yesterday (Monday) – are we going to ask each one of them why they came here or what their intentions were or who they intend to speak to or are we simply going to assume that they were on a cruise ship and were here purely to enjoy our beautiful country,” retorted Minister Steele in response to the question.

The Minister went on: “If we turned away individuals who came in on American Airlines or British Airways, do we ask them why? It’s the Immigration Officers right to (do that) but is that for the public dissemination or is it more important that based on their travel history they were quarantined or turned away?”

“My comment is that the plane came, the plane was turned back, the plane is no longer here. When it left here it went to Barbados and then to Panama and we don’t know where the plane is after that,” he said.

There are unconfirmed reports that the Chinese businessmen came to the island to discuss a number of projects with the Keith Mitchell-led government including the possible takeover of shares from the Grenada Electricity Company (GRENLEC).

Prime Minister Mitchell, who accompanied Minister Steele at Tuesday’ press briefing nodded his head in agreement with the statement made on the issue by the minister.

The Health Minister, was reportedly seen embarking the same plane that was turned away last week Monday evening, clad in regular clothing but wearing a face mask and gloves in a move which raised concerns in some quarters.

When contacted on the issue via telephone on Monday, Minister Steele explained that “health officials would interact with any vessel – aircraft or ship” noting that it “is their right and perogative.”

“… The plane has become an issue because your newspaper (THE NEW TODAY) has been spreading misinformation. So, I go there to make sure as to what happens…” he said.

When asked for clarity on the misinformation from the newspaper that is alleged to be circulated, the Minister did not answer but opted to direct members of the media to the website of the Ministry of Health, where official information can be obtained.