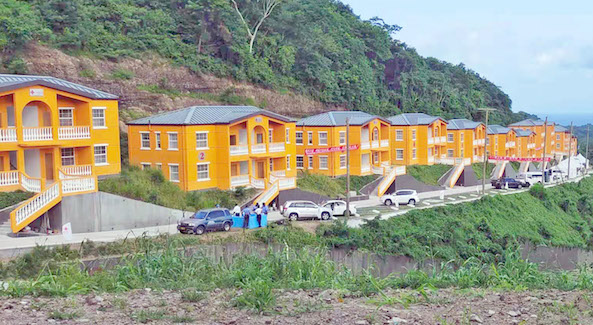 The site of the Chinese low income houses in St David

The newly installed National Democratic Congress (NDC) government of Prime Minister Dickon Mitchell is considering the possibility of retrofitting the housing units donated to the former Keith Mitchell-led administration by the Chinese government.

This was disclosed by the Minister for Social and Community Development, Housing and Gender Affairs, Phillip Telesford, at this week’s post-cabinet media briefing in St. George’s.

The minister was part of a delegation from the Ministry of Housing that toured the units last week, where it was observed that they are not equipped with cupboards, closets or washing facilities.

“… We concluded that in order to make the units a little more accommodating to first-time homeowners or occupiers, we thought it best that we may wish to consider the possibility of retrofitting those units to include cupboards and closets and maybe washing facilities because what we do not want is for people to be hanging clothes on their windows, doors, and verandas and stuff like that,” Minister Telesford told reporters.

The housing minister also announced that the Cabinet has approved a sub-committee to oversee the distribution of the apartment-styled units as it moves to address the critical housing needs in the country.

The sub-committee, he said, is in the process of developing a criteria for the distribution of housing units under the Chinese Low Income Housing Project, with a view to reopening the application process by September 1.

“At this stage the committee has already drafted the first set of criteria, and would be looking at that very soon, with the view of re-opening the application process by the first of September (and) to have the units distributed by the end of November to the first week of December,” he said.

Pointing to the “vast housing needs” in the country at this time, the senior government Minister noted that the Ministry has received “in excess of 4,000” applications so far, which exceeds the “limited number of 647 units” that are currently available for distribution.

During the just concluded election campaign, Prime Minister Dickon Mitchell announced plans to commence building 500 homes in each parish within the first year of forming the government, and to do so each year thereafter, through a nationwide housing programme which will be done in conjunction with the private sector.