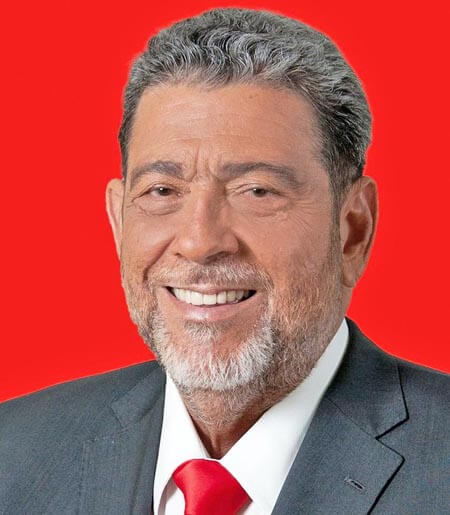 Dr Gonsalves – identified the two candidates vying to succeed him

My years are catching up with me. I am now 74 and next election I will be 79 and can’t run again as leader.

Those words came from Prime Minister Dr. Ralph Gonsalves of St. Vincent and the Grenadines who has led his Unity Labour Party (ULP) to five successive wins at the polls in the neighbouring island.

In an exclusive interview with THE NEW TODAY, Dr. Gonsalves pointed in the direction of a successor plan unlike his Grenadian counterpart Dr. Keith Mitchell who is also 74 years old and is yet to name the person to take over from him in the ruling New National Party (NNP) government.

According to Gonsalves, he is inclined to contest the polls only to defend his constituency but he will not be vying to become the next Prime Minister of St. Vincent after the polls.

“I might start to forget things – you never know how the brain does work,” he remarked.

Dr. Gonsalves was very candid about his intention to give up the leadership of the country to a younger generation of politicians.

He said: “Saboto Caesar who is one of my upcoming bright young men and one of the potential successors to me – either he or Camillo my son is going to succeed me.”

Caesar, an attorney-at-law by profession is the current Minister of Agriculture, Forestry, Fisheries, Rural Transformation, Industry & Labour and Member of Parliament for the constituency of South Central Windward.

Looking back at his impressive electoral victories in St. Vincent, Prime Minister Gonsalves said: “…Winning three on the trot is difficult, four is not easy but five is unheard of.”

St. Vincent’s most successful Prime Minister at the polls also had some word of advice to anyone interested in making a contribution to the political life of their country.

Dr. Gonsalves said to be successful one has “to be deeply connected with people”.

Related Article:  Clement: De Allie should never have been appointed to PAC

“You just can’t do it at election time – it’s an ongoing thing. It’s a vocation. It’s a single-minded activity,” he said.

According to Dr. Gonsalves, to be successful with politics one cannot either do it part-time but “you have to do it full time”.

Dr. Gonsalves said that he had learnt over the years that “you have to love people even when they are treacherous towards you”.

In addition, he said that people must not be allowed to “second guess what you are doing” in the political arena.

The Vincentian leader also had a word of caution about those people who have an impressive academic record and want to become politicians.

He said: “A lot of fellahs believe that (because of) their professionalism and that they are bright men and that could make them win elections – no, no – that ain’t happening.

“You have to do it day by day and be in connection with people,” he added.

According to Dr. Gonsalves, in a lot of the constituencies in St. Vincent, the electorate will even tell some of his own candidates quite openly “listen, we ain’t voting you, we voting the Comrade”.

The Prime Minister admitted that some of his own candidates do not have the type of connections that they should have with the people in order to stand on their own.

He also said that running a small island like St Vincent is not easy and that, “you just cannot play it by the book – you have to be creative”.

Both Dr. Gonsalves and Dr. Mitchell started their political careers in the 1970’s and are now considered as the two elder leaders in the Eastern Caribbean.