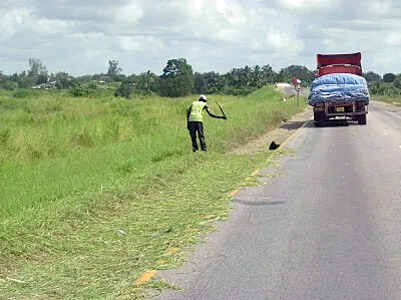 According to the official who is familiar with the operations of the programme, a number of gang leaders often collect money illegally in the name of persons who were never part of the programme.

In an exclusive interview with THE NEW TODAY, he suggested that the elected Member of Parliament for the constituency should take steps “to make sure that your people get in it and make sure it doesn’t have no ghost gangs.”

“Every gang leader is a contractor so when he comes to collect money you don’t want him to charge for seven persons but it is only five persons who were hired to do the job,” he said

He explained that each debushing gang has a supervisor in place to look after a certain number of gangs and these people should have an exercise book with the names of all the people in the gangs and to see if they did work on the programme.

The former public officer suggested that the new administration should allow the constituency caretakers to select the person to work in the debushing programme and to ensure that a rigid system is put in place to regulate all who are chosen for employment.

He referred to the debushing as “a kind of social service programme,” adding that “it’s a good thing but you have to monitor it.”

He said that the poorer persons in the community often look towards the debushing programme for their livelihood and “it’s a good social programme” that should not be scrapped by the government.

“For the debushing programme I will ask my parliamentary representative to name and to select people in the community to get as day work. They must be in charge of that because what does happen now is that you just leave it to a person and say you handle that debushing for me – don’t do that at all – that is the worst political mistake you could make,” he said.

Related:  The downfall of Keith Mitchell

“What you have to do is sit down with your committee and you know the people in your constituency who do participate in that and make sure that they get one fortnight each (in) the first round and if there is still (work) they get in the other fortnight,” he added.

According to the former civil servant, the politicians can benefit politically from the debushing programme because it has a lot of potential voters in the system for them on election day.

He said the elected MP for the area should “take a deep interest in it (debushing) and to always “demonstrate that you’re in charge” but refrain from marginalizing persons who live in the community regardless of their political affiliation.

He also urged the NDC administration to avoid a situation that often occurs in which one individual is allowed to pick the gangs.

He said that some of these people, who are mainly women, give employment mostly to their family members like brothers, sisters, niece and nephews.

According to the official, if the individual gets another gang in most cases they resort to padding the books by adding on the names of a brother and sister who did not work but collect money on their behalf.

“…You don’t want that to happen,” he remarked.

The retired civil servant also cautioned the new Congress government to take steps to prevent some people who already have a job but still get involved in the debushing.

“Some imani people that have work doing in the community – sometimes they end up in gangs too,” he said.

He indicated that these people sometimes end up getting two sets of payment from, government and that aspect of the programme should be “vigorously monitored.”

“(Name of former-NNP government minister withheld) is king for that – have somebody do something else for her but they (are) getting pay under the gang,” he said.

The former public officer also gave support to the idea floated by new Prime Minister Dickon Mitchell that debushing gangs should also be involved in farm labour support to bring about greater productivity in the agriculture sector.