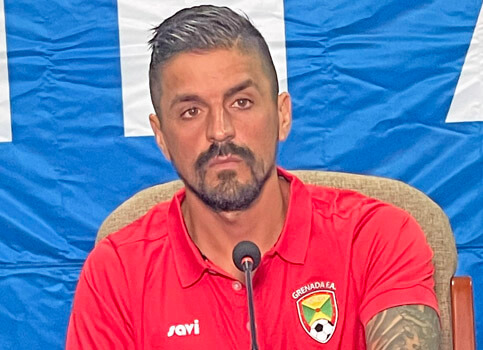 In an effort to transform the sport of football in Grenada, over the next year, players will be exposed to professional strength and conditioning training aimed at boosting their performance levels to meet the extremely high modern international standards and demands.

President of the Grenada Football Association (GFA) Marlon Glean has identified “fitness as one of the major shortcomings in Grenadian football” as he announced the hiring of professional Strength and Conditioning Football Coach, Claudio Alteri, to address the needs of the national teams.

Speaking at a press conference at the GFA headquarters in St. George’s on Monday, the Venezuelan-born coach, whose 1-year contract commenced on Monday, highlighted the “importance of fitness in modern football to compete against the extremely high standards and demands of the game internationally.”

He referenced the senior men’s level of play at the Confederation of North, Central America, and Caribbean Association Football (CONCACAF), and the biennial international UEFA Nations League football competitions.

“Football today is not 90 minutes anymore, its 95, 100 (minutes) and players need to be ready to hit those targets physically, obviously on the field tactically with the head coach and assistant coaches but also when we go to international tournaments,” Coach Alteri told reporters.

He will work with the U10, U12, national teams, along with the currently in training U14 boys, U15 girls, and U17 boys teams, scheduled to travel next month, in addition to the senior men’s national team, which is due to resume training shortly.

Coach Alteri is “highly recommended by a number of football experts from around the world,” and has previously worked with the Indian and Anguilla national teams, the Australian U17 national team, and on a club level with leagues in Australia and China.

According to President Glean, the new coach will “oversee the physical demands of the game but also what local players do outside of the field, in terms of nutrition, recovery, wellness strategy, how they sleep and interact, if they are motivated or not, from the youth to the senior team.”

Glean sees Alteri’s intervention as being “timely” especially, with the possibility of having matches at the end of August, a window in September, and as the national team prepares for its big match against the USA, scheduled to be played on island in March next year.

“If you look at our national teams over the years we have struggled in terms of our conditioning (and) fitness level. Claudio will work with our young fitness coaches, and the coaches on the various national teams to ensure that the players representing Grenada are at their (best) fitness possible level (and) I am confident that with the increase in the fitness level of our players that we will have better performances when our national teams leave Grenada, or even when we play at home,” he remarked.

Additionally, Glean said that part of Coach Alteri’s mandate is “to have workshops periodically with the clubs, and physical education teachers (and) with the folks at the Ministries of Education and Sports, et cetera, so that we can start building a culture of doing sports the right way…not jumping out from a bus to go onto a field to play a match and after the match jump back on a bus to go home.”

“…We know in this modern football it take more than just jumping on a bus to play a game, obviously that sort of practice can lead to a lot of injuries, and those injuries take long periods to recover.

So, if we can prevent those injuries by proper warm ups (and) stretching et cetera, and if this becomes part of our culture, we believe that we would have players playing for longer periods (and) with less injuries et cetera.

So, it’s about education but at the same time it’s about a partnership with the clubs (and) players et cetera, letting them understand why it is important for someone like Claudio to intervene, and to share knowledge in terms of preparation for matches.”

Glean told reporters that “compensation to players, especially those who are unemployed,” was high on the agenda when he met with newly installed Prime Minister Dickon Mitchell and Sports Minister Ron Redhead last week.

He also said the GFA is hopeful that a partnership can be formed to “provide some financial support to our players, especially those who are not working at the moment.”

“The idea,” he said, “is to have our players contracted so that they can train during the day, every day of the week and have football as a career.”

However, the GFA President explained that while the FA would not be able to pay monies compared to contracts some of the developed countries are paying, “we believe that we will be able to provide financial support to our players who are on national teams and are currently unemployed,” which is expected “to help with some of the nutritional matters.”

“If we provide financial support to our players they will be able to eat better and live a more comfortable life outside of football. So, the intention is to start that very soon,” he remarked.

“Going forward,” Glean stated that football should not be looked at only as a sport but as a business.

“We should not look at the sport (football) as a game but as a business. We have to look at all aspects of football to ensure that we can benefit, and capitalise on every aspect but to do that…we must put the relevant pieces in place,” he said.

“So, we started with the grassroots and there is a big buzz, and more and more kids are turning up every day…and now we have added the strength and conditioning fitness performance piece that Claudio is going to be responsible for.

So, we have to build up the business of the football to ensure that we can get maximum benefits and continue to build form there into competitions, opportunities for players and coaches.

The GFA boss disclosed that “over the next couple of months we will have more and more announcements as to how a proper football business should look in Grenada.”

He also used the opportunity to note that “with the grassroots we are trying to build good citizens more than “in an initiative that should result in the “vast improvement in the performance of our youth national teams, club teams, premier league and once we start performing here then there will be opportunities for our players to leave Grenada to earn from the sport they play.”

Grenada is currently ranked 168 out of 211 countries in the FIFA ranking.

Glean, who noted that the island was once 88th in the world, expressed hope that “over the next couple of months, and the next year, we should go back to under 100 in the world in the FIFA ranking.”