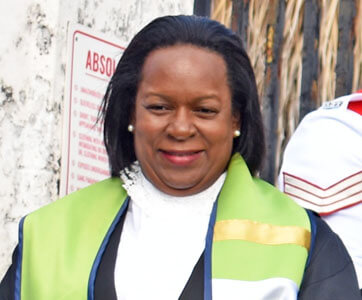 Land dispute settlement has often been referred to warring parties in Grenada to the high court for settlement.

The latest involves the Thompson family members on the sister isle of Carriacou who took their matter before female high court judge, Justice Agnes Actie.

The claimant was GERMAINE BRATHWAITE, represented by attorney-at-law Georgell George, who took action against GLORIA THOMPSON, AARON THOMPSON and JUDINE THOMPSON who were represented by another female lawyer, Danyish Harford.

The matter focused on issue of the claimant’s entitlement to property situated at Brunswick in Carriacou.

Following is the ruling of Justice Actie in favour of the Thompsons’:

JUDGMENT
[1] ACTIE, J.: This claim raises the issue of the claimant’s entitlement to property situate at Brunswick in the Island of Carriacou in the State of Grenada.

(1) An order that the defendants do forthwith pull down, demolish and remove chattel houses built on land situate at Brunswick in the Island of Carriacou in the State of Grenada and do forthwith deliver up vacant possession of the said land to the claimant;

(4) Mesne profits; Interest; Such further or other relief; and Costs.

[3] The claimant contends that at all material times she was the owner of premises measuring Fifteen Thousand Two Hundred and Forty-six square feet (15,246 Sq. Ft.) situate at Brunswick in the Island of Carriacou (hereafter “the property”) by virtue of what she claims to be an Indenture of Conveyance made on 22nd September 2009.

[5] In or about the year 2003, the claimant avers that she visited the property and informed the first and second defendants that they had six months to remove their structures and vacate the property.

Defendants’ case
[7] The defendants deny that the claimant is the owner of the property and put her to strict proof that her title deed is valid.

[9] In 1981, the defendants state that the third defendant obtained permission from Muriel McLeod to erect a chattel house on a property near to, but separated by a road from the property. The third defendant avers that she continues to pay rent to Bernard McLeod to this day.

Whether the Claimant holds valid paper title to the Property

[11] Michel JA in Marlon Mills v Stacey McKie at paragraphs 24 and 25 of his judgment stated thus:

“[24] Title, in the context of property, refers to the right which a person has to the ownership of the property. In terms of title to land, the right may be established by long possession of the land, with the intention to possess it as owner to the exclusion of everyone else. Title may also be established by a document which specifies the property to which it refers, the person who is asserting the right to it, and the manner in which that right was acquired – whether by grant, by assignment, by purchase or otherwise…

[25] The document establishing title may be a deed or other note in writing. A deed is a specific legal instrument signed, attested, delivered and, in some jurisdictions, sealed by the person transferring the property right to another person. A note in writing may be any written document, whether or not accompanied by any specific formalities. To constitute a note in writing that satisfies the requirements of the Statute of Frauds and qualifies to be called a paper title, the note must identify the property transferred, the consideration for the transfer, the name of the transferor and of the transferee, and it must be signed by or on behalf of the transferor.”

[12] The claimant relies on a document titled an “Indenture of Conveyance” dated 22nd September 2009 between herself as Administratrix of the Estate of Mary Theresa John, Kathleen Mitchell as Grantor and the claimant as Grantee. The Indenture is in fact a deed of gift. No reference is made to the root of title of the said Mary Theresa John in the deed of gift, nor has the claimant provided the court with further documentation in support of her title.

[13] The Indenture states that at her death on 23rd October 1953, Mary Theresa John was seised of the property and that on 25th March 2010, letters of administration was granted to the claimant.

[14] The claimant’s deed of gift does not amount to title to the land. This court in Gabriel Dubissette & Anr v Joyce McIntyre & Anr stated the following at paragraph 24:

“According to J T Farrand in Contract & Conveyance, a good root of title is an instrument of disposition which must deal with or prove on the face of it, without the aid of extrinsic evidence, the ownership of the whole legal and equitable estate in the property sold; contain a description by which the property can be identified; and show nothing to cast any doubt on the title of the disposing parties.”

[16] In addition, the deed of gift relied on by the claimant contains deceptive recitals. It is the evidence of the claimant that her mother, Mary Theresa John, had four children surviving at her death in 1953 – Norbert, Cosmos, Kathleen and herself. Though Mary Theresa John died intestate, the deed of gift refers only to the claimant and Kathleen. It is the claimant’s evidence that Cosmos died sometime in the 1990s, and that her brother, Norbert Cummins died in 2012, after the making of the deed. This circumstance demanded an account of Cosmos’ and Norbert’s interest in the property in the said deed of gift, especially so as it is the evidence that Norbert Cummins died leaving beneficiaries entitled to his estate.

[18] It is a renowned maxim that he who comes to equity must come with clean hands. The application of this maxim makes the claimant’s reliance on a deed, the contents of which are knowingly misleading to the claimant, an abuse of process of this court. The claimant does not hold valid legal title to the property and cannot therefore, given the state of her claim to title to the property, seek relief from this court.

Possession of the Defendants
[19] In the case of J A Pye v Graham3 it is stated that:

“If the law is to attribute possession of land to a person who can establish no proper title to possession, he must be shown to have both factual possession and the requisite intention to possess.”

[20] Moreover in Powell v McFarland and Another, it was held by Slade J that:

“Factual possession signifies an appropriate degree of physical control. It must be a single and conclusive possession…. The question what acts constitute a sufficient degree of exclusive physical control must depend on the circumstances, in particular the nature of the land and the manner in which land of that nature is commonly used or enjoyed.”

The First Defendant
[21] The first defendant’s history of occupation of the property begins with her obtaining permission from Nobert Cummins to erect a chattel house. It is her evidence that Norbert Cummins did not charge her any rent, nor did he indicate for how long she could stay on the property.

[22] The first defendant states that she constructed a board and wall house, and moved into same on 5th December 1979.

[23] It is the first defendant’s evidence that after being given permission to reside on the land she treated it as her own, and that no one has ever made claim for it up until the claimant filed claim.

[24] The first defendant has stated that she has been residing on the property for now forty-three years.

The first defendant’s children now reside on the lot on the property.

The Second Defendant
[26] It is the evidence on behalf of the second defendant that in 1999, Earla Thompson approached Norbert Cummins for a house spot to the front of where the first defendant’s house was located. Earla Thompson indicated that Norbert Cummins gave her permission to build her house, and that he did not charge her rent nor inform her that she has a certain number of years to stay there.

[27] It is the second defendant’s evidence that Earla Thompson cleared the lot on which her house is located, and commenced building in the year 2000. Earla Thompson completed her house on 23rd February 2001, which said house is on concrete pillars.

[30] There is however evidence given by Bernard McLeod that Nola Thompson has been in possession of the property since the early 1980s by way of a tenancy to the McLeod’s. Initially this was through Myione McLeod, then Bernard McLeod, that latter of whom offered to sell the land to Nola Thompson in or about the year 2001.

[31] The third defendant’s claim to entitlement to possession through the McLeod’s is strengthened by evidence of Clyne Paul corroborating the history of possession of that specific lot on the property.

Whether the Defendants have a better claim to the property than the Claimant
[32] It is trite that at common law title to land is relative. In Ocean Estates Limited v Normand Pinder4 it was held that:

“Where questions of title to land arise in litigation the court is concerned only with the relative strengths of the titles proved by the rival claimants. If party A can prove a better title than party B he is entitled to succeed notwithstanding that C might have a better title than A, if C is neither party to the action nor a person by whose authority B is in possession or occupation of the land.”

[33] As was cited in Claribelle Connell v Treldon Connell5, the learned authors of Law of Real Property by Megarry and Wade (3rd ed.) at p. 997 stated:

“Possession by itself gives a good title against all the world, except someone having a better legal right to possession.

[34] Given that the claimant has failed to provide the court with proof of valid paper title and has breached the hereinbefore equity mentioned maxim, she cannot succeed in her claim against the defendants who have demonstrated to have been in possession of portions of land from 1979, 2000 and 1981, respectively. The deed on which the claimant relies cannot support her claim, neither is she in possession of the property. Consequently, the claimant cannot establish title.

[35] The court finds that given Norbert Cummins’ beneficial interest in the estate of Mary Theresa John, he granted the first and second defendants’ occupation of portions of the property based on his entitlement to same. The court also finds that the third defendant has sufficiently satisfied the court of her possession of the lot of land through the McLeod’s, and that the claimant has not proven her entitlement to same.

[36] Thus, the relative strengths of the defendants’ possession surpass that of the claimant’s claim, as the claimant has not proven her case.

ORDER
[37] For the foregoing reasons, the court denies the relief sought by the claimant.

[38] It is ordered and directed as follows:

(i) The claimant’s claim stands dismissed;