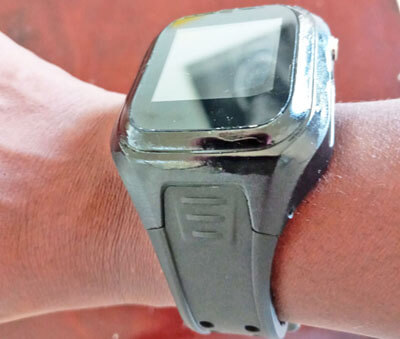 Geo-Fence watch on the wrist of someone in home quarantine

The system being used by the Ministry of Health to electronically monitor people in home quarantine is plagued by problems.

There have been several reports of technical problems with the devices that may be linked to the quality of the product, such as not powering on and batteries not charging.

The Ministry of Health has outsourced the service of electronically monitoring people who are in home quarantine and a company known as CITI, is providing the GPS watches as well as monitoring the movements of the users.

Geo-fence comes with a price tag of US$20 per day.

The GPS watches which use a technology similar to that of ankle bracelets, are supposed to be tamper-proof, waterproof devices that send an alert if it is removed or stops sending a signal.

Several people who opted to go into home quarantine and are wearing the watches have said they are not working and most have been waiting for days for someone to show up and fix the problem.

In one home two watches stopped working within hours of being activated and the users have been waiting for three days to have the problem resolved.

“They keep calling us to say they are coming but no one has shown up,” one person in quarantine told THE NEW TODAY.

Businessman Siddiqi Sylvester of Astral Travel agency, is one of the owners of CITI and Wednesday he confirmed that there have been problems with the watches where the water-resistant feature has not worked on all the devices deployed so far, although he tried to downplay the seriousness of the situation.

He said some people object to wearing the devices and others have a problem with paying for the service which cost US$20 per day.

Sylvester said as far as he is aware the problems have all been resolved and they have ordered a sealant product to fix the problem of water getting into the devices.

The CITI official is one of several persons expelled from the Congress party during its 2008-13 term in office following infighting between factions loyal to Prime Minister Tillman Thomas and the party’s General Secretary Peter David.

An individual, who arrived from England via Barbados over the weekend expressed concern that people could break quarantine as a result of the malfunctions since there is no way to monitor their location.

Health Minister Nickolas Steele confirmed on Wednesday that there are technical problems with the Chinese-made Geo-Fence watches.

“We have received some complaints and we have spoken to the service providers,” Minister Steele said.

He indicated that the company has been advised that they need to fix the problems or replace the type of devices that are being used, adding that there are other measures in place to monitor people such as periodic patrols by health wardens.

A user whose watch broke down said the service provider is aware but no one has come to fix it.

Sylvester said they do not believe there is a need to change the brand of device they are using even though a product that is sold as waterproof has turned out not to be.

CITI has 500 GPS watches and a seven member team monitors the devices in use from remote locations in six-hour shifts.

However, there appears to have been problems related to people picking up their shifts on time.

One person whose watch has been inoperable for five days said they are yet to be contacted by those who are supposed to be doing the monitoring.

The monitors operate on their own without any supervision, raising questions about their diligence in making sure that every active device is monitored.

Sylvester said devices that malfunction can be replaced within a matter of hours but based on investigations by THE NEW TODAY, some people have been waiting for more than four days.

In addition, it appears that CITI does not have a system in place to quickly replace devices for people who may live outside of St George’s.

So far close to 400 people who have returned from abroad or are planning to return have applied for home quarantine however Minister Steele said that not everyone will receive approval.

Home quarantine approval is said to be based on the living arrangements – whether the person can live separately from others in the building – and the ability to monitor the home.

Minister Steele pointed out that children in home quarantine would not need to wear a Geo-Fence watch.

THE NEW TODAY understands that about 30 persons in home quarantine are currently wearing the watches.