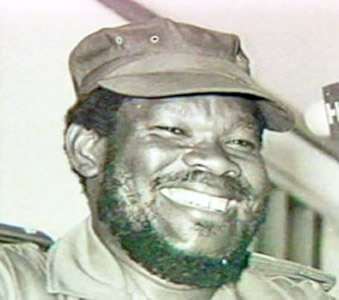 Army strongman Hudson Austin – died at his home on September 24

An estimated 60 persons including some of the hardline Marxist-Leninist leaders of the ill-fated 1979-83 Grenada Revolution turned up Thursday morning at a small church in St Paul’s in the heart of St George South-east constituency to bid farewell to the island’s former Army Commander, General Hudson Austin who died September 24 at age 84.

Austin’s ashes, placed in a black box, was brought to the Bethel Methodist church where he once officiated as a Lay Preacher before joining the left-leaning New Jewel Movement (NJM) in which he became the head of the National Liberation Army (NLA) that toppled the Eric Gairy government from power in a March 13, 1979 coup d’etat.

The General was released from prison just over a decade ago after serving a sentence of just over 30-years for the October 19, 1983 execution of Prime Minister Maurice Bishop, Cabinet ministers Unison Whiteman (Foreign Affairs), Jacqueline Creft (Education) and Norris Bain (Housing) in a bitter power struggle for control of the left-leaning New Jewel Movement (NJM) that formed the People’s Revolutionary Government PRG) after the overthrow of Gairy.

A handful of some of the key players in the Revolutionary process turned up at the church service including some who were also convicted for Bishop’s murder – Lieutenant-Colonel Liam “Owusu” James, Majors Leon “Bogo” Cornwall, John “Chaulkie” Ventour, and Christopher Stroude.

Two other low-ranking soldiers who were convicted along with General Austin for the October 19, 1983 execution of Prime Minister Maurice Bishop in a palace coup attended the funeral service – Cecil Prime and Vincent Joseph who was part of the 5-man Firing Squad that gunned down the Grenadian leader.

In a very rare interview, Lieutenant-Colonel James who introduced the motion for Joint Leader in the NJM in September 1983 between Bishop and his ambitious deputy, Bernard Coard that sparked the bitter infighting in the party, paid tribute to the former army strongman as a revolutionary fighter who made a valuable contribution to the national landscape.

He described General Austin whom he called “The G-Man” as “a complex character” but one who was “a selfless and committed person” in the fight for a better Grenada.

“We all had our faults, we all have our weaknesses but what comes to mind was his selfless contribution to this country,” he said.

“I have known him from way back – since I was in school. In the early days of the New Jewel Movement I was still in school and I was gravitating in this direction since I was a student,” he added.

James, considered as the third most powerful figure in the Grenada Revolution after Bishop and Coard, was a student of the Presentation Boys College (PBC) which was also attended by another top army officer, Lieutenant-Colonel Ewart “Headache” Layne who did not attend the funeral of the General.

One person who was not spotted at the church service was Captain Lester “Goat” Redhead who was known to be the closest member of the Grenada 17 to General Austin after their release from prison.

Redhead was described as the person who brought meals daily for “The General” but speculation is rife that he had abandoned Austin in his final months and weeks allegedly over financial issues.

Austin became estranged from the other members of the Grenada 17 who were convicted for the murder of Bishop after he granted an interview with a local journalist in November 2021 in which he blamed Coard along with Layne for the killing of Bishop and the other Cabinet ministers on Fort Rupert/George.

In the exclusive interview, General Austin said that Layne could not have taken on his own to order the executions without first discussing it with Coard who was the other powerful figure in the NJM as he did not resign from the post of Joint Leader of the party but only as Deputy Prime Minister and Minister of Finance.

Attorney-at-law Ruggles Ferguson who has been identified as a member of the pro-Coard faction in the NJM power struggle also paid tribute to Austin and his contribution to national development.

According to Ferguson, the ex-army boss “has contributed immensely to Grenada (and) has always been committed to service.”

He said he got to know Austin through his father in the early 1970’s in the struggle against the Gairy right-wing government and remembers him as one “who has always been serving and sacrificing.”

Apart from Austin’s life as a military commander, Ferguson recalled that the General was associated with road building on the island as an Engineer and pointed to the reconstruction work he did at the Richmond Hill prison as an inmate following the passage of Hurricane Ivan in 2004.

“H.A led the transformation process at the prison, created several new buildings and after he came out of prison, apart from working there, he assisted many people – individual citizens, prison officers (and) other inmates. So, he has served society and humanity tremendously well and I think he deserves a grand salute,” he said.

PRG member Claudette Pitt who was flanked by another initial member of the government that was formed at Studio Two of Radio Free Grenada within hours of Gairy’s downfall, delivered an address in which she referred to the General as “a deeply committed patriot” who made many sacrifices on behalf of the Grenadian people.

Pitt likened Austin’s commitment to the struggle as in keeping with the NJM motto which was to fight to build “a just society” for the residents of Grenada, Carriacou & Petite Martinique.

Among the prominent Grenadians who attended the church service in memory of the late General Austin were former Attorney General and Minister of Legal Affairs, Dr. Francis Alexis, QC, Attorney-at-law Neil Noel, Labour Senator in Parliament, Andre Lewis, as well as businessman Michael Mc Intyre who was a longstanding boyhood friend of the ex-army strongman.

Noticeable in the congregation were Brian Lindsay and Peggy Nestfield – members of the now defunct small left-leaning party known as the Maurice Bishop Patriotic Movement (MBPM) which often attacked Coard and his small cell group known as the Organisation for Revolutionary Education and Liberation (OREL) which is believed to have plotted the internal palace coup against the Grenadian leader.

Master of Ceremony, George “Porgie” Cherebin told the congregation that the church service was being held by the family members of General Austin to give him “the best possible send-off.”

THE NEW TODAY will be releasing Part 3 of the final interview done with General Austin on the morning of October 19 to mark the 39th anniversary of the bloody events on the fort in which Bishop was executed by a firing squad led by Lieutenant Callistus “Iman Abdullah” Bernard in which the former army commander has pointed an accusing finger at the leadership of OREL for giving the order.