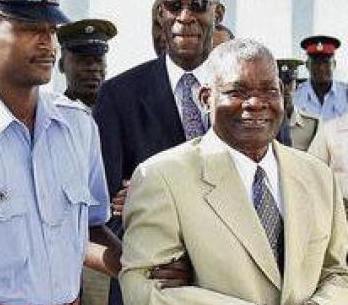 The top military leader in the 1983 army bloody coup, in which Marxist Prime Minister Maurice Bishop was executed, died Saturday at his home in St Paul’s in Grenada.

General Hudson Austin was ailing in recent months and had been diagnosed with Stage 4 cancer.

“I think the doctors looking after him took too long to find that out,” said the family member who said that private doctors and even doctors at the St George’s General Hospital had been trying to determine his illness.

“For several years now H.A has been having a problem with bleeding in the nose, they even cut it several times but it just kept growing back. He was also having problems with hearing and the cancer was also affecting his brain,” the family member told THE NEW TODAY.

In his final year, General Austin was virtually abandoned by his revolutionary comrades especially the other members of the Grenada 17 who were convicted with him for the murder of Bishop, along with Foreign Minister Unison Whiteman, Education Minister Jacqueline Creft and Housing Minister Norris Bain.

The former army boss said “the Comrades” stopped taking his telephone calls after he did an interview with George Worme of THE NEW TODAY in which he revealed some of the “hidden secrets” that led to the army massacre on Fort George on October 19, 1983 in which Bishop was killed.

According to General Austin, it was a plot by the deputy Prime Minister Bernard Coard and a radical hardline faction involved in a secret cell group known as the Organisation for Revolutionary Education & Liberation (OREL) who tried to seize control of the 1979-83 Grenada Revolution.

Related:  Gilchrist: Government looking to have one pension arrangement

In November 2021, Austin in one of three interviews with THE NEW TODAY brushed aside claims made by some Grenadian revolutionaries that the United States had a hand in the bitter internal dispute that surfaced within the NJM that led to the execution of Prime Minister Bishop.

“America had nothing to do with it – nothing,” said General Austin who charged that everything that happened was “instigated and manipulated” by an over-ambitious Coard as the U.S government was never able to infiltrate the leadership of the Grenada Revolution.

“It was an internal coup – that is what they (Coard and his OREL boys) were planning and when they didn’t succeed properly, they murdered people,” he added.

The General claimed that Coard had also lied to him when he told him that Bishop had been killed in crossfire but when he was released from prison after a lengthy sentence a female soldier informed him that she witnessed first-hand the executions by a Firing Squad led by Lieutenant Callistus “Iman Abdullah” Bernard.

“When I tell you about a crook and a schemer – every loophole he get, he manipulates it,” Austin said of Coard, who is now living in exile in Jamaica.

Austin also said that Coard had tried to get the NJM to change its name to the Communist Party of Grenada (CPG) but it was defeated by a vote in a party meeting.