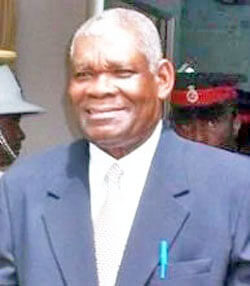 Former army commander General Hudson Austin has brushed aside claims made by some Grenadian revolutionaries that the United States had a hand in the internal dispute that surfaced within the Marxist-oriented New Jewel Movement (NJM) that led to the execution of Prime Minister Maurice Bishop on October 19, 1983.

“America had nothing to do with it – nothing,” said the head of the now disbanded People’s Revolutionary Army (PRA), General Hudson Austin in an exclusive interview with THE NEW TODAY.

According to Austin, “everything was instigated and manipulated” by Coard and that the U.S government of the then late President Ronald Reagan had nothing to do with the internal feuding within the ruling party in Grenada.

He said it was well-known by everyone on the island that Washington was opposed to the Grenada Revolution because of the close relations forged with communist Cuba, the then Soviet Union and the left-leaning Sandinista forces in Nicaragua under Daniel Ortaga.

He insisted that the U.S was not able to infiltrate the leadership of the Grenada Revolution but it was people in NJM itself that destroyed the revolutionary process which started on March 13, 1979 with the coup d’etat against the elected Eric Gairy government.

“It was an internal coup – that is what they were planning and when they didn’t succeed properly, they murdered people,” he said.

Most of the persons identified as the coup leaders against Bishop have been identified as being members of the secret cell group known as the Organisation for Revolutionary Education & Liberation (OREL) which was headed by Coard.

In an unsworn statement during the Maurice Bishop murder trial, Coard who was convicted for mass murder often made mention of the alleged role of known U.S operatives during the pro-Bishop demonstrations held back in October 1983 to free the Grenadian leader from house arrest.

He claimed that some persons in the crowd were seen sporting pro-U.S placards as they swarmed into the official residence of the Prime Minister at Mt Wheldale to release Bishop from custody.

According to Austin, the late Prime Minister paid a price with his life for not taking heed of the many warnings from persons that he should not trust the power-hungry Coard who had been harbouring thoughts for a long time to take over the Grenada Revolution for himself.

He said he had personally warned Bishop based on information that he had picked up from people outside of the island especially in neighbouring Trinidad & Tobago about Coard’s activities down there while serving as a Lecturer at the St Augustine campus of the University of the West Indies (UWI).

The General who was also charged with Bishop’s murder has often maintained that he was not involved in any meeting that took place on Fort Frederick to send troops to storm Fort Rupert where Bishop had sought refuge after being freed from house arrest.

He said he was told later in the day by Coard that Bishop had been killed in crossfire but when he came out from prison years later a female soldier informed him that she witnessed first-hand the execution of bishop and the ministers by a Firing Squad led by Lieutenant Callistus “Iman Abdullah” Bernard.

General Austin was also asked to comment on the belief held in some quarters that if Bishop had held promised elections after the overthrow of the Gairy government and became the elected leader of the country that Coard would not have been reluctant to make the grab for power.

However, Austin identified Coard as “one of the big persuaders” within the revolutionary process against the holding of free and fair elections on the island.

He said that Coard often made the statement “that we weren’t ready yet for elections.”

“We didn’t ready yet for elections but he (Coard) was ready to declare NJM a communist party – you see the kind of nastiness he is,” the ex-army chief told THE NEW TODAY.

“When I tell you about a crook and a schemer – every loophole he get, he manipulates it,” Austin said of Coard who is now virtually living in exile in Jamaica.

Bishop’s People’s Revolutionary Government (PRG) had set up a Constitution Review Commission, headed by the late Trinidad Senior Counsel, Allan Alexander to rewrite the Grenada Constitution to pave the way for the holding of elections on the island.