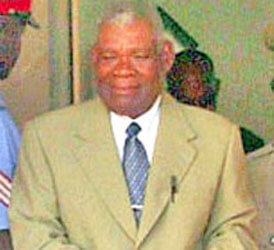 General Hudson Austin – might now be doubtful of the army’s version of the gruesome killings in Plains, St Patrick

Forty years after the bullet riddled body of five St Patrick men were discovered in Plains, there is still a great deal of speculation as to who did commit the gruesome act during the 1979-83 Grenada Revolution.

The top brass of the People’s Revolutionary Army (PRA) blamed a dissident group involving members of a Black Muslim clique as the perpetrators of the criminal act.

However, some persons have pinned the executions on the army, saying that the men including members of the prominent Stanislaus family who were visiting from England were gunned down late at night in a road block mounted by the army to trap the Muslim group which included “Duck” and “Ayube”.

The Muslims were initially involved in the army but friction developed and when they deserted were branded as counter-revolutionaries.

After the incident at Plains, the army later killed Duck and Ayube who were said to be in hiding but plotting to destabilise the Revolution.

One army Lieutenant had told THE NEW TODAY that a soldier who allegedly took part in the Plains operation indicated to him that the Stanislaus brothers were driving a vehicle similar to the one used by the Muslims and soldiers opened fire when it approached the roadblock.

He said the soldier told him that when an army captain who was in charge of the men realised that it was not the Muslims he then gave an order to kill everyone as a few had already been killed in the hail of gunfire.

In a recent interview with THE NEW TODAY, former Army Commander General Hudson Austin was asked to clarify the controversial killings at Plaines.

He said the report that was given to him at the time was that the Muslims were trying to assassinate Major Dave “Tan” Bartholomew who was the Commander of the PRA unit in the St. Patrick area.

“What happened is that Tan had gone in a different vehicle but these boys (Stanislaus Brothers) were traveling in a vehicle similar to the one that Tan does use and they (the Muslims) shoot up the men thinking it was Tan. That is the report I got,” he said.

General Austin has stated openly that he was not told the truth about the manner in which Prime Minister Maurice Bishop was killed on Fort Rupert/George on October 19, 1983 amidst a bitter power struggle with his deputy Bernard Coard over the question of Joint Leadership of the then ruling New Jewel Movement (NJM).

Bishop had reneged on a majority decision taken by the Central Committee (CC) of the NJM for the hardline Marxist-Leninist Coard to return to the major decision making body in the party as his equal.

The General said he was on sick leave on the day of Bishop’s death but was told by the army top brass that the Prime Minister was killed in crossfire after Lieutenant-Colonel Ewart “Headache” Layne had dispatched soldiers to recapture the fort where the late Grenadian leader had sought refuge after a large crowd of supporters had freed him from under house arrest at his official residence at Mt. Wheldale.

He indicated that a female soldier who witnessed the execution told him years later that Bishop along with three Cabinet Ministers were captured, taken to the Top Square on the fort and machine gunned to death by a Firing Squad led by Lieutenant Callistus “Iman Abdullah” Bernard.

The General said he confronted Layne while serving time in prison for Bishop’s murder and his second in command of the army told him that he would discuss the matter with him after they leave prison.

Layne has never made any public statement on the manner in which Prime Minister Bishop was killed.

The Bishop Killers were rounded up by U.S and Caribbean troops who entered Grenada on October 25, 1983 to help restore law and order and to pave the way for the return of democratic rule of law in Grenada.