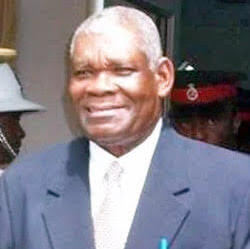 Months before his death three weeks ago, former army commander General Hudson Austin distanced himself from the destruction of the bodies of executed Prime Minister Maurice Bishop and three Cabinet Ministers who were executed 39 years ago in a bloody  internal palace coup within the then ruling New Jewel Movement (NJM) created People’s Revolutionary Government (PRG).

In an exclusive interview in November 2021 with THE NEW TODAY, the late General Austin said he did not know who had overturned his decision for the bodies of Bishop and those other leaders who were riddled with bullets after facing a Firing Squad should be handed over to their families through La Qua Funeral Home.

“I have done 25 years in jail for something I don’t know nothing about,” he quipped.

According to the ex-army boss, on the night of the executions he had telephoned Fort George where the bodies were and issued instructions to the head cook of the People’s Revolutionary Army (PRA) at Fort George, Sgt. Fabian Vernon Gabriel to allow Eric La Qua, a representative of La Qua funeral home onto the compound to take away all the bodies so family members can go there “to claim their loved ones.”

“I don’t know who gave that order because I gave an order to take the bodies to La Qua – let La Qua have all the bodies. The thing about it is –who gave that instruction? Up to this day I don’t know, I have suspicion but you can’t do things on suspicion.”

“…All how I ask about that everybody ducked the question. Who gave the instruction to carry people in Calivigny? I have suspicion but suspicion is not evidence. I am very much concerned that the people who were killed on the fort were not taken to La Qua – some were taken to La Qua.”

During the Maurice Bishop murder trial, the cook at Camp Calivigny in the south of the island, Christopher Bowen identified the Leader of the Execution Squad, Callistus “Iman Abdullah” Bernard as the person who brought the bodies of Prime Minister Bishop and the others in a vehicle and proceeded to dump them into a trench that was dug as part of a construction project.

Bowen said he was ordered by Abdullah to assist him in bringing old tyres, wood and other material to help light the fire to burn the bodies.

The army cook also disclosed that days after the U.S-led military operation to topple the bloody junta that had topped Bishop, he led American soldiers to the spot where the bodies were burnt.

The court was told that the Americans removed the remains to carry out forensic pathology to identify the remains.

General Austin identified ex-deputy Prime Minister Coard as the person who informed him that Bishop and the others were killed in crossfire on the fort.

“It turned out to be a lie – these people were lined up against a wall and killed,” he told THE NEW TODAY.

The army Commander insisted that those persons who were part of the Firing Squad should have been freed by the court as they were given an illegal order to kill the Prime Minister and his colleagues.

The General said he firmly believes that the Prime Minister was murdered on the fort and that the then ruling party had no power to order those killings.

“If people commit an offence – as big as that offence may be – you can’t line them up and shoot them down. You either put them in front of a military tribunal, a court within a court (and) you (can also) use your local court and deal with the matter. You can’t kill people like that.”

“The people who gave the order to do that (execute) are the people who should take the brunt of the punishment – not these little innocent (soldiers).”

General Austin insisted that the Central Committee of the party had no power to either try or execute anybody for an alleged offence.

He said that none of the other major players in the Fort Rupert bloody killings have told him anything about what exactly took place at the army headquarters in which Bishop was killed.

Austin said he was out of the country and had only just returned from a visit to North Korea when the split within the NJM widened on the issue of Joint Leadership of the party between Bishop and Coard.

He said he had come to realise that “a lot of clandestine things were going on behind my back” and that those behind the attempted overthrow of the Prime Minister were just not power hungry but “power stupid”.

The General became estranged from his former revolutionary colleagues after he conducted the interview with THE NEW TODAY and gave an insight into the killings on the fort.