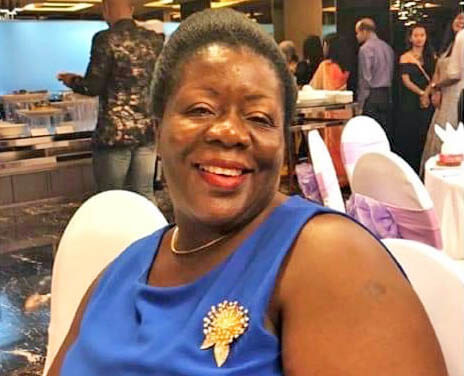 Forrester made the charge in documents filed in the Supreme Court Registry in response to a case filed against the State by Bain-Thomas in connection with the non-payment of nearly one million dollars owed to her in damages following the manner in which she was unconstitutionally removed from her post by Prime Minister Mitchell after he was returned to power following the 2013 general election.

In September 2017, the Court of Appeal ruled that Bain-Thomas was unconstitutionally removed from the post of Secretary to the Cabinet and that she was wrongfully terminated from her position in the Public Service due to the action of PM Mitchell.

The former Cabinet Secretary was subsequently removed from the payroll of the State in July 2018 and continues to suffer financial losses as the State failed to honour the decision of the court to award her financially for the judgment in her favour.

In her court paper, Bain Thomas said that as a consequence of being removed from the payroll of the State and not being paid the judgment debt owed to her in a timely manner, she has sustained loss and damages inclusive of loss of income, rebate payment on property taxes and NIS contributions.

In light of these assertions, AG Forrester is contending that Bain-Thomas has refused to accept a Payment Plan put forward by government and is apparently trying to lay the blame at the feet of PM Mitchell.

Following are highlights of the response in the Bain-Thomas matter from AG Forrester:

General Damages were determined by Master Moise in March 2019. There were ongoing negotiations in relation to payments being made to the Claimant until at least August 2019. The Claimant changed Counsel (not firms), the COVID-19 pandemic emerged and the Claimant shortly thereafter, commenced the claim at bar seeking constitutional redress.

The Claimant alleges, without particularising and or substantiating those allegations, that the State been unreasonable, failed to act with reasonableness, has lacked good faith in addressing her debt and, that the Prime Minister of Grenada is seeking to financially humiliate and punish her for having been successful in obtaining judgment against the State.

The Claimant fails to mention to this Court that the proposed payment plan presented to her a mere four months after the parties agreed on the Special Damages payable which proposal she rejected, was presented to her when the Prime Minister held the Ministerial portfolio of Minister of Finance.

Oddly, the Claimant presents a skewed incomplete version of a programme named “To the Point” which, took place several weeks after the filing of her Claim, to contend that the Prime Minister in essence has decided not to pay the Claimant’s debt.

We urge the Court to listen to the complete programme (or at least from 38:50 minutes onwards) and reject the skewed convenient extracts of the Claimant presented with no transcription, for an improper purpose.

Noting the unparticularised and unsubstantiated allegations of the Claimant against the State, the evidence before the Court confirms on a balance of probabilities that the State has actively sought to engage with the Claimant to arrange payment of its debt to her.

Hence, her claim is without merit, frivolous and vexation hinged primarily on personal grievances that she has with the present Prime Minister of Grenada.

This is confirmed by the Facebook postings of the Claimant in relation to the Prime Minister insofar as it relates to her judgment debt. This Claim is an abuse of the process of the Court being advanced for an improper purpose.

The evidence before this Court shows that the Claimant hinges her case on the contents of the “To the Point” programme aired July 2020 of which a skewed extract is presented with no transcription, to found her claim issued in June 2020, that the State has deliberately opted not to pay her judgment debt via the actions of the present Prime Minister of Grenada.

That evidence withers and goes frail in the face of the Defendant’s evidence that steps were taken to engage the Claimant to have her judgment debt paid which she rejected which was done when the Prime Minister was also the Minister of Finance.

The July 2020 programme she references when listened to in full, contains an express statement by the Prime Minister that formulations were being done to address payment of the Claimant’s judgment debt, that the State’s position in relation to judgment debts is that even though it disagrees with a judgment, the decision of the Court must be followed.

It is an amazing exaggeration for the Claimant to assert that one’s personal disagreement with a decision of the Court equates to a refusal to comply with an order of the Court especially having regard to the circumstances of this case.

Moreover, the Prime Minister did not state that he disagreed with the decision of the Court though he thought it was undeserving, he stated that he disagreed with the decision of a prior Government to give a permanent appointment to the post of Secretary to the Cabinet right before an election, having regard to the nature of that post within the construct of the Cabinet whose decision making is confidential.

The reality is that on a change of Government, holders of sensitive high office positions may be changed to persons with whom the new government is comfortable and that flexibility is curtailed once a permanent appointment is made via the Constitution.

Whilst that is the opinion of the Prime Minister in relation to appointing persons to permanent positions in high office, not on contract within the Public Service, there is no evidence from the Claimant which illustrates that opinion means she has had a constitutional right breached and or that she will not be paid by the State.

That is coupled with the evidence before this Court, that the Claimant obviously has a personal dispute with the Prime Minister of Grenada as evidenced by her Facebook postings illustrating the frivolous and vexation nature of her claim herein for constitutional redress not being one made in a genuine manner, but a grand abuse of the process of the Court.

“.. Because although I was appointed in accordance with the constitution it was not by the God of this land who is now the paymaster” but she notably does not disclose she did receive an offer that was not to her satisfaction.

We submit that this is a prime example of the type of case that ought not to engage the constitutional jurisdiction of the Court. There is no evidence presented by the Claimant to substantiate her position that the constitutional jurisdiction of this Court has been properly invoked in the circumstances of this case for the purposes of enforcement of her judgment debt against the State.

We humbly request that the Court dismisses the Claimant’s claim with costs to the Defendant as it is an abuse of the process of the Court.

We submit that the alleged damages the Claimant purports to have sustained as a result of the delay in payment of her judgment debt are too remote for the State to be held liable for any such loss.

Moreover, the Claimant’s pleaded case relates to matters that should have properly been advanced in the assessment of damages application for which judgment was delivered in March 2019 by Master Moise as those matters are now res judicata. Consequently, the Claimant’s claim for damages in the case at bar is an abuse of the process of the Court.

The Claimant has pleaded that being removed from the payroll of the State has resulted in her sustaining losses. We submit that any loss that arises as a consequence of the Claimant being removed from the State’s payroll should have properly been advanced in the Claimant’s assessment of damages case in Claim No. GDAHCV2014/0082 Gemma Bain-Thomas and the Attorney General of Grenada and is now therefore res judicata.

Each and every asserted loss that the Claimant alleges that has arisen as a consequence of being removed from the payroll was a matter that should have been raised and advanced on the assessment of damages in Claim No. GDAHCV2014/0082 Gemma Bain-Thomas and the Attorney General of Grenada as it is rightfully a matter arising as a consequence of the Claimant’s removal from the post of Secretary to the Cabinet and not the delay in payment of her judgment debt.

The purpose of the principle of res judicata is to prevent a litigant like the Claimant from seeking duplicative litigation on issues previously litigated but being raised again in subsequent proceedings which, with reasonable diligence could have and or should have been taken in earlier proceedings.

It is an abuse of the process of the Court for the Claimant to seek to claim damages on the basis that she was removed from the Government’s payroll in the case at bar as all of those issues are now res judicata.

Moreover, the alleged damages asserted by the claim are too remote to be sustainable having regard to the conjecture and the dearth of the evidence presented by the Claimant. The Defendant can only be liable for what is reasonably foreseeable.

The Claimant’s alleged losses of rebate on property taxes, loss of NIS benefits, and loss of interests or earnings on the Claimant’s various accounts are pleaded as being a consequence of her removal from the State’s payroll.

There is no evidence on affidavit presented by the Claimant of how the delay in payment of the judgment debt is connected, for example, to loss of NIS benefits, for this Court to deem that it is reasonably foreseeable or within the actual or imputed knowledge of the Defendant that such would have occurred.

Again, these are matters that properly fell for determination on the assessment of damages in Claim No. GDAHCV2014/0082 Gemma Bain-Thomas and the Attorney General of Grenada.

Moreover, the Claimant has a duty to mitigate her loss and has advanced no evidence of any such efforts being extended. Instead of seeking to enforce her judgment debt as the legislation provides, the Claimant has sought to abuse the process of the Court via a new constitutional claim, seeking damages for matters determined in Claim No. GDAHCV2014/0082 Gemma Bain-Thomas and the Attorney General of Grenada.

CONCLUSION
In conclusion we submit:

The Claimant has alternative remedies available via the provisions of the Crown Proceedings Act and Civil Procedure Act which, should be used to seek to enforce her judgment against the State.

Further, this is a frivolous and vexatious claim advanced by the Claimant due to personal issues she has in relation to the present Prime Minister of Grenada as the evidence confirms.

This Claimant’s claim is an abuse of the process of the Court and should be dismissed.

It is not reasonably foreseeable that the Defendant is liable for losses sustained by the Claimant on being removed from the payroll of the Government which matter is res judicata. Also, the Claimant has neither presented any evidence to substantiate the losses she alleges nor sought to mitigate the alleged losses.

The Claimant having no reasonable basis for seeking to invoke the constitutional jurisdiction of the Court when alternative remedies are available and without having sought to engage a single enforcement method available to her, confirms that she acted unreasonably in bringing this suit.

Her conduct in bringing this suit warrants that an award in costs in favour of the Defendant be made. Consequently, costs should be awarded to the Defendant on the dismissal of this claim.