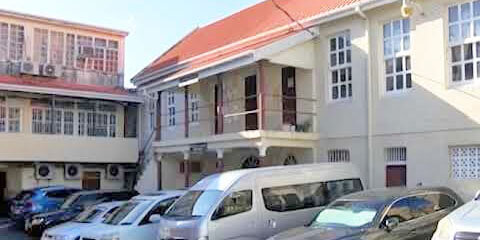 The Judiciary in Grenada has been hard hit by the surge of Covid-19 in the country during the past month.

According to attorney-at-law, Jerry Edwin about five barristers were infected by the virus along with several of their employees while three lawyers and several of their staff are also in isolation after coming in contact with the deadly disease.

“We have been deeply affected,” he told THE NEW TODAY over the weekend.

Edwin said that two clerks associated with a high court judge were also infected with the virus on the same day along with several of the staff of the Supreme Court Registry.

“Even if the (high) court is working remotely, the clerks came down with the virus,” he said.

The criminal defense attorney disclosed that about half a dozen staff members attached to the various Magistrate’s courts on the island were also affected by Covid.

Edwin said this development prompted members of the Criminal Bar in Grenada to seek an urgent meeting with the Attorney General Dia Forrester and Acting Chief Magistrate Teddy St Louis to discuss the possibility of getting the Magistrates to start hearing matters remotely as is the case with the High Court.

“We did take a look at that situation as a collective body and our Magistrate’s courts will all be online,” he added.

“Justice will not be compromised because we take safe measures,” he said.

According to Edwin, the law will have to be amended to facilitate the process for the Magistrates and lawyers are looking towards the Attorney General to bring this into fruition.

He said that AG Forrester has a draft of the amendments to be made to the law which has to be submitted to Parliament for approval.

The attorney stated that he could not shed any light on how it will be done since Parliament has been prorogued until a new session is called in another few weeks.

Edwin said: “I don’t know if it means although Parliament has been prorogued what it means is for Parliament to convene for the law to be passed because the proroguing of Parliament means that new laws cannot be passed,” he said.

“So, it means that Parliament must re-open if only for the purpose – Parliament must amend the existing act so that the Magistrate’s Court can move remotely because the law as it currently stands, only allow for the High Court to do its business remotely,” he added.

The outspoken U.S-trained attorney-at-law stressed that the entire legal profession in Grenada including judges, the magistracy and their staff, as well as law enforcement officers like the police have been affected by what he called “this mismanagement” of the Covid-19 pandemic by Health Minister Nickolas Steele whom he accused of failing to put structures in place to tackle the virus.

“We could be in a national security crisis should more policemen – more of them on the frontline be stricken by the virus due to what I say is the mismanagement by the Ministry of Health, in particular the Minister of Health.

According to Edwin, he is not questioning Steele’s performance as a business manager with his family’s car dealership but he “is incompetent as a Minister of Health” and should be replaced by another member of the Cabinet to do the job.

Grenada has seen its Covid-19 cases move rapidly from 172 infected persons on August 5 to well over 5, 000 six weeks later.