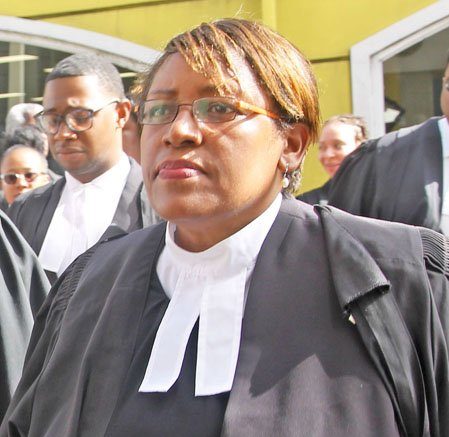 Legal Affairs Minister Kindra Maturine-Stewart has dismissed as “false and misleading” reports of an imminent closure of the Supreme Court Registry, amid moves afoot to relocate the services to the Coach Jay McCormick building on Church Street, due to the urgent need to repair the mold infested building on Church Street, which currently houses the main operation of the Registry.

In a news release issued last week Friday, the Lisa Taylor-led Grenada Bar Association (GBA) expressed concern over what was termed “the imminent shut down of the Supreme Court Registry” due to “dangerous environmental conditions” with the building.

The local Bar called on the “authorities to dedicate all the necessary manpower and resources for the services of the Registry to be relocated without interruption,” and ultimately for the long promised “Hall of Justice.”

However, Minister Maturine-Stewart sought to clear the air giving assurances in a release on Monday, that the “Registry of the Supreme Court will not be temporarily closed” while problems with its current location are addressed.

In her statement, the female government minister made no mention of the “dangerous environmental conditions” alluded to by the GBA President but confirmed that “temporary arrangements are in place to facilitate the lodgement of deeds at the Parliament Building” effective March 2 to March 11 while “all other operations will remain at the Church Street compound until March 11, 2020.”

According to the release, there is an overall plan to move the Registry to the “second floor of the Coach Jay McCormick building” on Church Street, which currently houses Modern Photo Studios.

The release pointed out that “in order to facilitate continued access to information from Deeds and Land Registry, the Registry together with the Ministry of Infrastructure will make arrangements for remote connectivity/access to the existing servers.”

But when contacted on the issue by THE NEW TODAY on Monday, the female GBA President defended her statement and expressed dissatisfaction with the manner in which the situation is being handled by the authorities.

Taylor said: “…When I said imminent in my release I meant it but I didn’t say when…The registry needs to be abandoned, the building is a sick building (and) that is a fact and there is a scientific basis for me saying that there is a problem with the environmental condition – that is a fact.

“So, whether you want to call it a shut down or a relocation, the fact is the (building housing the) registry is not a building where we as human beings should be visiting unless they address the problem of the environmental concern and that is a fact,” she added.

Taylor went on to say: “…Whether it happens today, tomorrow or next week, the services at the Registry are to be relocated and when the services are relocated that building would not be used until they address the problem.

“How could you say it’s untrue that the building has to be closed when you are admitting that the services have to be relocated to another building – what’s the difference, essentially?

“What we called for in the statement because our legitimate concern is that the relocation is not being handled properly. In the statement, we have said categorically that we will not accept any disruptions, so if they can relocate without any disruptions, great for them and all of us because the information available to me was very credible information including the fact that the environmental conditions in the Registry are such that no one should be there as of today or yesterday or last week.”.

According to Taylor, the fact that the authorities are allowing the continued use of the building only “confirms the fear I have that if they were taking seriously the issue of risk to health, they would not be continuing the use of that building”.

“So, it (is) not about whether imminent means yesterday or March 11, the fact is that the conditions at the building have to be addressed (and) they should have been addressed already.”

The female GBA boss was firm in declaring that “every day that they stay there puts the health of people who use that Registry – the staff, lawyers, their clients and the public at risk. Why are they not moving faster to get people out of that building when it is established that the infestation of mold is to such a degree that it is not safe for people to be there (and) that is really what they should be focusing their interest on.

“I don’t think it is right for any government who has information that there is mold in a building that could affect people’s health, I don’t think it is right that it should be shunted aside because that is the real issue and we want to know how quickly you can address it and without disruption to the services, So, if you say (that) in order to ensure that there is no disruption you have to continue using the building, people should be concerned about that,” said Taylor.

Meanwhile, GBA on Tuesday issued the following statement in direct response to the criticisms leveled at the body by Legal Affairs Minister Kindra Maturine-Stewart:

“The Grenada Bar Association has taken note of a statement issued by the Ministry of Legal Affairs appearing on the Government of Grenada’s website in which the Bar is portrayed as peddling untruths. The Bar is therefore constrained to respond to this unnecessary distraction.

The Bar stands by its statement issued on 28th February, 2020. We remain, as always, a necessary stakeholder and partner in achieving solutions to the problems affecting our legal system.

It is an undisputable fact that due to the state of disrepair and presence of mold, among other reasons, the building housing the Supreme Court Registry must of necessity be closed. The resulting relocation of services cannot be achieved without disruption except a carefully planned multi-sectoral approach is adopted.

The evidence available to the Bar when we released our earlier statement and to date, gives no comfort that such planning is in progress with the sufficiency required to ensure that relocation will be achieved seamlessly. By any objective standard, the authorities had sufficient notice of the issues affecting the Registry so as to plan properly to address them.

That the Registry remains open after confirmation of the presence of dangerous mold illustrates the absence of proper planning or worse, a reckless disregard for the health of all who use the Registry.

We continue to urge the authorities who are responsible for managing the process of rectifying the conditions at the Registry while ensuring the continuity of the Registry services to do so urgently, responsibly and effectively.

The protection of human health and the security of the critical contents of the Registry must be paramount in this process. This is most certainly not the time for a puerile focus on semantics and gamesmanship”.