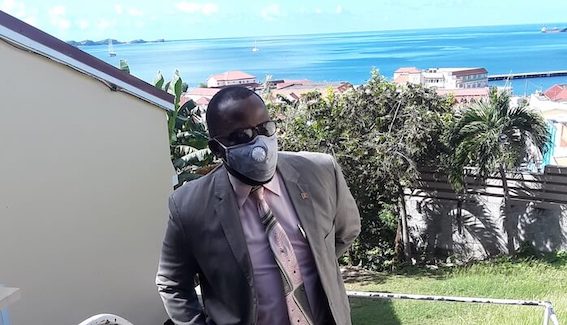 One year after being charged for assault of a journalist, Government Minister Winston Garraway stood in the Court Dock for the first time Thursday to answer the criminal charge against him but the matter has faced yet another delay.

Attorney at Law Ruggles Ferguson who is representing Sen Garraway requested an adjournment on the grounds that his client had never received notification of the charge against him.

The matter is before Acting Chief Magistrate Teddy St Louis in the number 1 Magistrate Court.

Senator Garraway is charged with assault stemming from an incident more than a year ago when he attempted to prevent journalist Calistra Farrier from conducting an interview with senior government minister Clarice Modeste-Curwen at Government Headquarters, Ministerial Complex.

Ferguson told the Court that under section 67B of the Criminal Code his client is required to receive a summons at least five days before trial and that he only received a Summons four days before.

“Once a charge is lodged in the Court then for the accused person to know that there is a charge then they must be serve with it, whether in criminal matters or civil matters.

Ferguson has blamed administrative bottlenecks for the situation.

“He was only served on Monday.

“As indicated by the magistrate is a problem with service because there are many documents to serve, many people all over the country and matters are constantly adjourned because of service.

“I understand there is only one vehicle available to serve thousands of people throughout the country.”

Sen Garraway was not asked to plead to the charge and the matter has been put off to May 25, 2021.

This was the third time that the matter has come up for hearing, the previous dates being March and July and on both occasions the virtual complainant had been present but Sen Garraway had never put in an appearance.

The trial was delayed as a result of the COVID19 lockdown.

Senator Garraway is accused of shoving the journalist to the ground while trying to block the interview which Minister Modeste had agreed to.

The incident was widely publicised with a photograph of the journalist on the floor and the then Minister of State for Information standing over her in an apparently threatening manner.

In an audio recording of the incident he is heard referring to the female journalist as a devil.

At the time the Keith Mitchell Administration sought to pre-empt and usurp the authority of the Justice system by declaring that they had investigated and concluded that “nothing happened”, despite the widely circulated photograph.

Farrier said she is disappointed that the matter did not proceed and has suffered yet another long delay.

“I would like to have my day in Court because being assaulted like that is a serious matter and even more serious given that I am a journalist who was in the line of the duty when the incident occurred.

“The matter is about press freedom and gender-based violence, two very critical issues that must never be taken lightly,” she said.

During Thursday’s proceedings the Police Prosecution informed the Court that they were like to add more witnesses to the list.

Currently there are three witnesses down to testify on behalf of the prosecution, including two media workers, Gerard Joseph and Shere Ann Noel who is the President of the Media Workers Association of Grenada and also a contract employee of the Government Information Service.

Noel and Joseph, who is widely speculated to be a hostile witness, did not appear in Court.

The third witness is a criminal investigation officer.