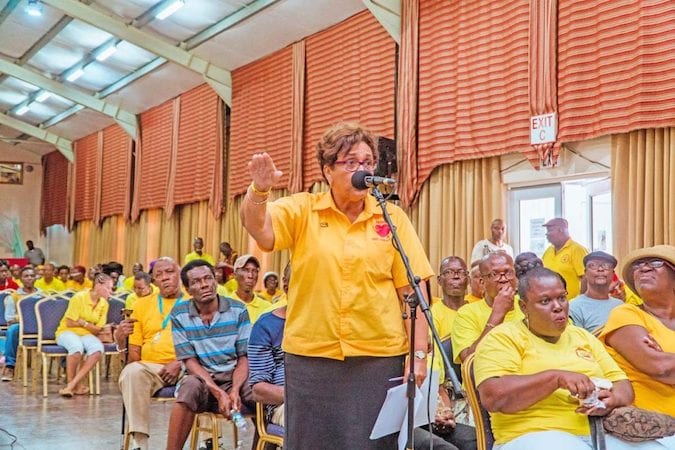 “Your NDC party is going to look out for you”.

That’s was the key message delivered to members and supporters of the main opposition National Democratic Congress (NDC) on Sunday night by newly elected Political Leader, Franka Alexis-Bernardine, the former Minister of Education in the 2008-13 Tillman Thomas-led administration.

Alexis-Bernardine outlined her policy programme at a public meeting at the Morne Rouge playing field in her maiden address to a rally of the party.

She gave an undertaking to visit every constituency on the island and to spend at least a week in each of the NDC constituency office to observe their operations. She said that this is necessary in order for her to “see how best to support them to do the job of running the office”.

“I must have a clear picture of the issues and struggles you are having”, she told the gathering. The island’s first female elected political leader laid out plans to initiate “a workers’ canvass programme for the NDC workers in each constituency to determine what are their needs in order to help them to enjoy a much better standard of living.

Alexis-Bernardine acknowledged that over the years many of the NDC “foot soldiers” have been putting out a lot and working hard for the party with very little support given to them in return.

“We need to know where you live, are you eating every day, can your child go to school every day. These are the questions”, she said.

“We will start there before the elections and then move on and expand should we become the next government”, she added. According to Alexis-Bernardine, she is accepting the job of leader of Congress to help bring about a different mindset in the people as part of her development agenda for Grenada, Carriacou & Petite Martinique.

She said: “We are very aware that harmony must be interwoven in our society so that development can take place and that sensitivity to the economic, social & environmental circumstances of every citizen must matter and not only those who “wear Green” and voted for the ruling party.

“Everybody must receive help based on need and not on political affiliation. We must be committed to the freedom of choosing the party of our choice and not be denied and victimised because we didn’t choose the party in office. It must be about Grenada, Carriacou & Petite Martinique”.

The new Congress leader used her address to give an insight into the type of ship that Congress members and supporters can look forward to based on her description of the concept of leadership. She said: “Leadership in my mind is about listening to people about their perspectives and then choosing what together we perceive as the best path forward.

“Brothers and sisters, this cannot be. It is wrong. You cannot help only those who vote for you. That is not democracy. You are the MP of everyone in your constituency once the election is over and we must guard our democracy carefully.

“Everyone must get housing material based on need, not according to who they support. We must stand up to that “quid pro quo” mentality which cannot be accepted as part of the public agenda and those who have a voice must say so. Democracy allows us to do so.

Alexis-Bernardine advocated for an agenda of change to be made not only within the NDC but across the island. She said that as Congress regroups following its back-to-back 15-0 loss at the polls in the 2013 and 2018 general election it is obvious that “new ways of thinking and looking at issues must emerge”.

“Our attitudes must change and must be far more receptive to others particularly in the party. We are capable of not feeling threatened if a person has a different opinion. It’s ok to think differently. It’s not ok to superimpose it on others and try to force others to think your way. We must learn to agree to differ. Learn to differ without animosity”, she remarked.

Alexis-Bernardine dispelled any notion that NDC is dead politically following the recent setbacks at the hands of the ruling New National Party (NNP) of Prime Minister Dr. Keith Mitchell. “When you hear people talking stupidness about the party dead or the party dying you need to just smile at them in the face and say: “Fool yourself still”.

We will fight back to get our country built with the last drop of energy that we have”, she told party supporters. In addressing current issues in the country, the former Education Minister referred to “big mismanagement issues’ in the country that have found the Mitchell-led regime rather short-footed.

She pointed to the decision of government on the Friday before Carnival in August to go back to Parliament to look for money in the form of supplemental budget support to run the country.

In addition, she said the NNP regime has found itself in an embarrassing situation with the Cellphone gate scandal involving former Government Senator, Sheldon Scott who is not a member of the government but was allowed to run up a bill to be paid by the State of over EC$70, 000.00 in three months.

According to Alexis-Bernardine, the government has also virtually dropped a new passport tax on the people in order to raise additional funds.

This is reference to the significant increase in the cost of e-passorts to Grenadians which came into force on November 1. In her address, Alexis-Bernardine called for a proper investigation into alleged wrong-doing within the state-owned Marketing & National Importing Board.

She said that the inquiry should not be conducted by the Integrity Commission, headed by attorney-at-law, Anande Trotman-Joseph, wife of the former NNP government Attorney General, Dr. Lawrence Joseph but in keeping with the Public Enquiry Act as enshrined in the Grenada Constitution.

The new NDC leader called on the government in the Botanical Gardens to account to the people for each dollar that was collected from the failed shrimp farm project in St. Mark.

About six months ago, Prime Minister Mitchell announced that an investigation will be carried out since monies were collected to facilitate the Shrimp Farm project but had been taken out from the account without giving any specifics.

The female Congress leader also called for a full account to be given by the NNP administration on the use of funds generated from the PetroCaribe project, initiated with help from Venezuela. Alexis-Bernardine also called for “a full account of the Citizenship By Investment programme” in which non-nationals receive a Grenadian passport in exchange for a financial contribution.

She also called for legislation to be introduced in Parliament by Prime Minister and his government “to allow us to know who are the new Grenadian citizens” under the CBI programme.

This must be done, she said in order to ensure that “just like I could stay here in Grenada and know who are the new citizens in Antigua”.

“How else will we know if any notorious criminals are amongst the new Grenadians”, said Alexis-Bernardine.