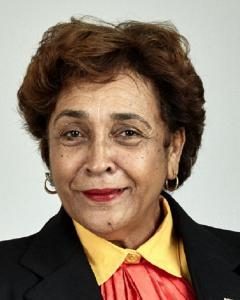 Former Education Minister Franka Alexis-Bernardine has become the first female to be elected to head a major political party in Grenada.

Alexis-Bernardine was elected unopposed today as the new Political Leader of the main opposition National Democratic Congress (NDC) at its annual convention held at the Trade Centre at Morne Rouge, St. George’s.

She is due to address the delegates at the party convention shortly in her first address to members and later in the evening is expected to outline some of her plans for Congress at a public meeting.

Sources told THE NEW TODAY that Alexis-Bernardine is expected to focus her address on the role of women and the youth in the new trust forward for the party which lost the last two elections 15-0 to the ruling New National Party (NNP) of Prime Minister Dr. Keith Mitchell.

The post of General Secretary was retained by Glen Noel who was considered as the main strategist for the party in the last general election and the Campaign Manager in the ill-fated 2013 national poll.