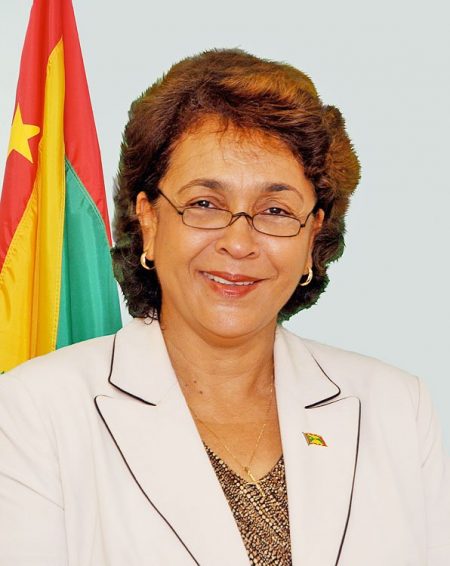 Former Education Minister Franka Alexis-Bernardine has accepted an invitation from an influential arm of the main opposition National Democratic Congress (NDC) to meet with its members to discuss the possibility of assuming the Political Leader position at the upcoming convention planned for November 3.

Well-placed sources told THE NEW TODAY newspaper that the meeting could be held in the next few weeks as Alexis-Bernardine is currently out of the country on private business.

About two weeks ago, a committee involving former Prime Minister Tillman Thomas and former party Chairman, Kent Joseph met to look at persons who can be considered to assume the top job and start the process of preparing the party for the next general election.

A source who spoke on condition that he was not identified said that a decision was taken to approach Alexis-Bernardine as the only realistic person who can do the job that is needed at this point in time.

He stated that the decision taken by the committee is a clear indication that it saw the former Education Minister as the best person to be entrusted with the job of Political Leader.

“I think that she can do the job. She is the best person at this point in time”, said a senior member of the party.

THE NEW TODAY was told that the plan of the NDC Management team is to send only one name forward to the delegates at the convention to elect the new NDC Political Leader.

St. Patrick West Caretaker, Joseph Andall has been performing the role of NDC Interim Leader following the resignation of former Finance Minister Nazim Burke after the party’s huge defeat in the 2018 general election.

The source said that Alexis-Bernardine has responded positively to the invitation to meet with the leadership committee members and sent back a message that she will give advance notice about her travel plans to fly back to Grenada to meet with them on the issue.

He told this newspaper that the former Education Minister would accept the position as NDC leader on condition that she is allowed to have some kind of an input in the new team that is selected at the Convention to put Congress in a position to challenge the ruling New National Party (NNP) for state power in the next national poll.

He said the new NDC political leader in waiting is also prepared to meet and work with all persons who are committed to the advancement of Grenada in the best interest of everyone in the country.

He also stated that Alexis-Bernardine is mindful of the amount of political work that is needed to be done in the coming months especially after the convention to put NDC in a good position to unseat the NNP of current Prime Minister Dr. Keith Mitchell.

He said that she is confident that if a good team is assembled that the work can be done to allow Congress to put on a much better showing than in the last two general elections when it suffered 15-0 defeats at the hands of NNP.

If elected in November, Alexis-Bernardine will become the first female to lead a major opposition party in Grenada and into a general election with the hope of becoming the island’s first female Prime Minister.
Speculation is rife that the newlook NDC Executive would comprise of a number of new faces at the top echelon of the party.

An insider confided in THE NEW TODAY that a former high-rank civil servant in the 1980’s is tipped to become the new NDC Chairman at the convention while a number of persons are being looked at for the key role of General Secretary.

He said that the current Caretaker for St. David, Adrian “Persuader” Thomas has indicated an interest in running for the post of Deputy Political Leader at the November 3 Convention.

There are reports that a former top official of the Keith Mitchell-led government has approached a number of top NDC members to discuss the possibility of joining the party as the Number Two man in Congress.

The source said that it is very unlikely that the position will be offered especially as the person is not even a member of the party.

Congress is expected to field a number of new candidates in the next general elections.