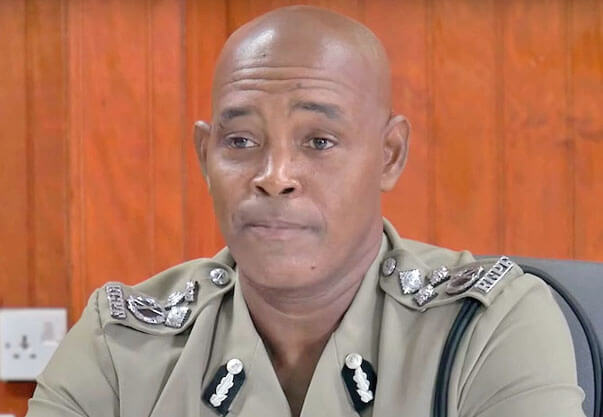 Deputy Commissioner of Police Frank Redhead – cited as being careless

Nothing is going to come out of it – no disciplinary action will come out against him for that but he should be disciplined.

That’s the lament of a senior member of the Royal Grenada Police (RGPF) in response to Tuesday’s incident in which Deputy Commissioner of Police Frank Redhead who is now serving as Manager of the Grenada Ports Authority (GPA) had left his personal licensed firearm inside a vehicle owned by the state body and it was reported as stolen.

The high-ranking member of the force described the incident which took place outside the headquarters of the Port Authority as “a major breach of security” on the part of Redhead who only picked up the job on July 1 on secondment from the Force.

He said it was totally wrong for Redhead to go to work and to leave a gun in a vehicle and that disciplinary action should be taken against the Number Two man in the Force despite the fact that the firearm that was stolen belonged to him personally and not the Police Force.

“That makes it worse,” he told THE NEW TODAY.

The senior officer said that if the weapon had belonged to RGPF then Redhead was entitled to have it on him or leave it inside the vehicle.

He pointed out that a licensed firearm assigned to an individual other than a police officer should either be in a chest or on the person himself at all times.

In addition, he said a licensed firearm that is assigned to a member of the local police force is considered to be part of the policeman’s uniform.

“If it’s not (on the police officer) then he (is) supposed to have it in a chest…” he remarked.

The high-level police officer noted that when someone applies for a licensed firearm then as part of the vetting process, the police will visit the home of the individual “to see if you have a place to hold it, to secure it.”

Asked whether Redhead should continue to be the holder of a licensed firearm in light of the incident, he said that is within the purview of the Commissioner of Police, Edvin Martin.

“As far as I’m concerned he (Redhead) is careless”.

The senior cop said he knows of several instances where RGPF has revoked the license given to someone to carry a gun due to carelessness “where you did not secure your firearm properly”.

“And that being the case, he (Redhead) being a Deputy Commissioner of Police and in charge of Port Authority now, I think that’s carelessness”.

The police officer stressed that if this had happened to a Junior Police officer or a young Constable they would have been disciplined for the incident by the Police High Command of which Redhead is a member.

“If was a Junior Officer who came to him (Redhead) he would have revoked his license (to carry a firearm),” he added.

In addition, he said if this incident involved a civilian they would have lost the licensed firearm through revocation by the Commissioner of Police and in the case of a member of RGPF, he would not be assigned another firearm.

Members of the Criminal Investigation Department of the Police Force recovered the stolen gun on Wednesday with the assistance of CCTV footages that captured the individual who broke into the vehicle that was parked adjacent to the head office of the Port Authority on the Carenage.

Meanwhile, the head of a local security firm sent the following message to THE NEW TODAY on the stolen gun issue involving Redhead, the Deputy Commissioner of Police:-“Franklyn Redhead is a nice guy and I am sorry that this happened to him but it’s an embarrassment. As a police officer, he knows better.

He knows that his firearm has to be either on his person, locked in a safe or lodged with the police for safekeeping either at the Armoury, the SSU (Special Services Unit) or the most senior officer at the police station. In his case, he could leave it at Central Police Station in the morning and collect it in the evening. If that happened to me or anyone else, we would lose our licence. The worst place to leave a firearm is locked in a vehicle.”