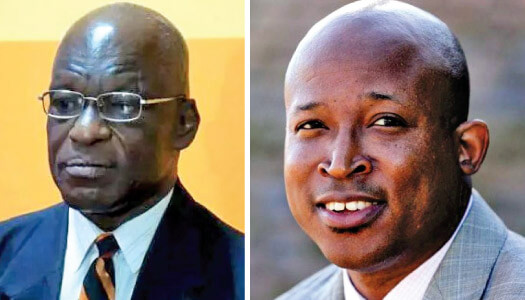 Dr. Alexis (l) – is not taking the issue lightly; Cabral Douglas (r) – is persisting with his allegations

Former Grenada Attorney-General and Minister of Legal Affairs has moved to the local high court to get an order to impose a prison sentence on a Dominica-born attorney-at-law, Cabral Douglas who has made damaging allegations of bribery against him.

Dr. Alexis through his local attorney-at-law Ruggles Ferguson has approached the court for a Committal order against Douglas who is believed to be now living in Australia.

At the centre of the spat between the two lawyers in an allegation made by Douglas that bribery took place between Alexis and former OECS Chief Justice Sir Dennis Byron in a book written by the former Grenada government minister.

The matter is currently before the court.

However, Alexis is contending that Douglas violated a court order in which he was not supposed to repeat the alleged bribery allegation.

Following is the full text of the Dr. Francis Alexis affidavit that was filed in the Supreme Court Registry for Douglas to be committed to prison:

AFFIDAVIT OF FRANCIS ALEXIS IN SUPPORT OF NOTICE OF APPLICATION I, FRANCIS ALEXIS of Saint Paul’s in the parish of Saint George in the State of Grenada being duly sworn MAKE OATH and SAY as follows:

2) I am the Applicant herein and the Claimant in the substantive claim filed herein on 10th November 2017.

3) I make this affidavit in support of my application for committal of the Respondent for breach of the interim Order of this Honourable Court dated 17th January 2018 – referred to in paragraph 6 below.

4) On November 10th 2017, I instituted High Court action herein, against the Respondent, seeking damages for libel, including aggravated and exemplary damages, and a permanent injunction to restrain him, whether by himself, his servants or agents, or otherwise howsoever from printing or publishing or causing to be printed or published or in any way repeating the offending words identified in the Statement of Claim as Offending Publication 1, Offending Publication 2 and Offending Publication 3 or any similar words defaming me, (“substantive claim”).

5) The aforementioned offending publications falsely, maliciously and scandalously assert, in essence, that I received a bribe from Sir Dennis Byron (Sir Dennis) ahead of my appointment to the Regional Judicial and Legal Services Commission (R.JLSC). At all material times, Sir Dennis was the President of the Caribbean Court of Justice and Chairman of the RJLSC.

6) By an interim Order (in the substantive claim) dated the 17th day of January 2018 (‘interim Order’), the Respondent was restrained whether by himself his servants or agents or otherwise howsoever from printing or publishing or causing to be printed or published or in anyway repeating the said offending words or any similar words defaming me pending the trial and determination of the substantive claim or until further order.

7) Neither has there been a trial or a determination of the substantive claim by this Honourable Court. In fact, since the substantive claim was instituted on the 10th day of November 2017, the Respondent has not filed any Acknowledgment of Service or Defence as required by the Civil Procedure Rules 2000. The time has long passed for doing so and I have instructed my Attorneys to apply to this Honourable Court for Judgment in default against the Respondent.

8) In breach of the said interim Order, the Respondent continues to publish the said offending words and/or similar words defaming me.

9) In an article published via the internet on Antigua.News on November 9th, 2022, the Respondent was quoted as calling on the Commissioner of Police in St. Lucia “to issue warrants for the arrest of both Sir Dennis, former President of the Caribbean Court of Justice, and Dr. Francis Alexis…under relevant offences of bribery…” A true copy of the November 9th 2022 article is annexed hereto and marked “FA1″.

10) The November 9th 2022 article further accused Sir Dennis of using JURIST Project funds “to bribe” me before “unlawfully” appointing me to the RJLSC. The RJLSC is the body responsible for the selection of judges to serve on the Caribbean Court of Justice (CCJ).

11) As is well known, the CCJ serves as the final court of appeal for four (4) Caribbean countries, Barbados, Guyana, Belize and Dominica. In its Original Jurisdiction (O), the CCJ serves most countries in the English-speaking Caribbean, including Grenada. I served on the RJLSC Six (6) years, 6 November 2015-5 November 2021.

12) The false, malicious and scandalous pronouncements of the Respondent are deliberately, designed to bring me, Sir Dennis, and the CCJ into public disrepute.

13) To date, the Respondent has neglected or refused to enter an Acknowledgment of Service or Defence to the substantive claim, but instead chooses to peddle and publish utterly false and malicious propaganda in the public domain against myself and Sir Dennis.

14) Further, the Respondent has neglected or refused to satisfy, the cost order of $750.00 made in the in the said interim Order in my favour.

15) The interim Order contains a penal clause, in bold and all capital letters, in the following terms:

17) The Press Release, dated January 30th, 2018 (the year being erroneously stated on the face of the release as 2017) was sent to media practitioners and media entities throughout the Caribbean and begins with the words “Dear Media Members”. It was also sent to several Lawyers and Judges. The opening two (2) paragraphs state;

High Court documents have emerged which confirm that Grenadian lawyer and Regional and Judicial Legal Services Commissioner Dr. Francis Alexis QC has been granted an injunction against Dominican Attorney and law (sic), Cabral Douglas in a long running dispute.

According to the high court order: “It is ordered that the respondent/defendant is hereby restrained by himself his servants of agents of otherwise howsoever from printing or publishing or causing to be printed or published or an (sic) anyway repeating the offending words…”

A true copy of the cover email displaying the email addresses of media practitioners, media entities and others to whom the press release was sent is now shown to be exhibited hereto and marked “FA 2”.

18) The Press Release also alludes to the penal clause contained in the interim Order.

In the penultimate paragraph, the Respondent states:

According to the high court order: “If Mr. Douglas fails to comply with the terms of this order he may be liable to imprisonment.”

A true copy of the full Press Release issued by the Respondent is now shown to me and exhibited hereto as “FA 3”.

21) Based on the foregoing, I respectfully request this honourable Court to grant the relief contained in the Notice of Application for committal of the Respondent to prison.

22) I therefore make this affidavit in support of the Notice of Application filed on even date herewith and for no improper purpose.