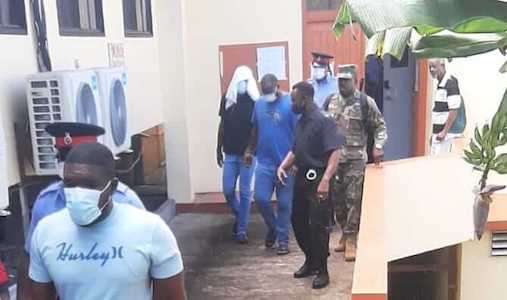 The four who pleaded guilty were John Alexander, 55 years,  Deckhand of Arima, Mikhail John, 35 years, Sailor of San Juan, Noel Cooper, 42 years, Captain of Gurpe, and Sheon Jack, 28 years , Sailor of Cocorite – who were all charged with one count each of Grievous Harm against Anderson Peters and his brother, Kiddon Peters.

Only five of the six were placed in the prisoner’s dock when the hearing started as State Prosecutors had earlier decided to drop charges against 40-year old Abiola Benjamin of Maraval, who was described as the Cruise Operations Manager on the vessel after video footage was reviewed and indicated that he was trying to separate the men who were engaged in the scuffle.

THE NEW TODAY was told that Director of Public Prosecutions (DPP), Christopher Nelson was among those who reviewed the video footage that was widely circulated on Social Media platforms within minutes of the incident.

In the case of 45 year old sailor Lance Wiggins of Cocorite, he pleaded not guilty and minutes later the Chief Magistrate ruled that he was free to leave the court.

DPP Nelson reportedly decided not to proceed with the two charges against Wiggins on the grounds that the evidence deduced from the video footage was insufficient to bring a conviction on him.

Alexander, John, Cooper, and Jack also pleaded guilty to the charge of Causing Harm to Kiddon Peters, the brother of Anderson Peters during the brawl on the ship.

The Chief Magistrate ordered the Trinis who pleaded guilty, to remain in custody until Wednesday when they will return to court for sentencing.

The Trinidadians who are crew members of the vessel were brought into the St George’s No.1 Magistrate’s Court amidst very tight security by members of the Royal Grenada Police Force (RGPF).

Chief Magistrate St Louis called the case about an hour and a half after the scheduled start of proceedings due to behind the scene negotiations between lawyers for both sides – Director of Public Prosecutions (DPP), Christopher Nelson and leading defense attorney, Cajeton Hood, the former Attorney General under the 2013-18 New National Party (NNP) administration.

The world No.1 Javelin thrower came into the court rather quietly with his brother and took a seat directly behind the six suspects.

Anderson Peters, clad in a white long sleeve shirt and wearing a tie, did not look at the Trinidadians but was often seen fiddling with his cellphone.

The Grievous Ham charges against the Trinis in connection with Anderson Peters carries a maximum sentence of 5 years imprisonment and a fine of $5000.00.

The Causing harm charge linked to Anderson’s brother can result in the Magistrate sentencing the suspects to up to one year in prison and imposing a fine of $3000.00 on each of them.

Barrister-at-law Derick Sylvester was seen inside the courtroom but he did not stay for the hearing.

Sylvester has been retained by Anderson Peters to file civil proceedings against the Trinidadians in which he is seeking monetary compensation for the injuries inflicted on him.