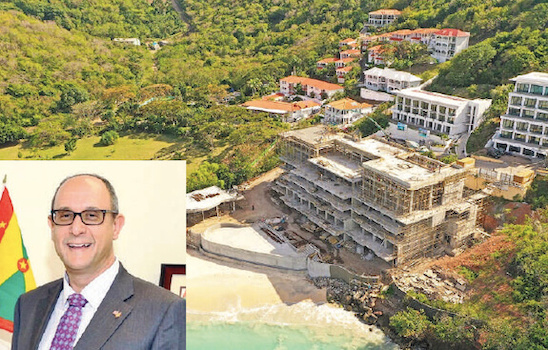 The Grenada Government has once again found itself before the court, this time sued by the developers of the Kimpton Kawana Bay Resort.

The suit was filed Thursday with the International Centre for Settlement of Investment Disputes, in the name of True Blue Development Limited, a CBI company, through which investors had been attracted for the development.

The developers are accusing the Grenada government of deliberately trying to frustrate the completion of the project and “arbitrarily squeezing their near-complete project into failure”.

The group seeks arbitration before the International Centre for Settlement of Investment Disputes, the Washington-based World Bank tribunal that oversees investment disputes with sovereign states.

Principal developer Warren Newfield gave up his diplomatic post with the Grenada government almost a month ago offering anti-business practices on the part of the Keith Mitchell-led Administration, as the reason for his resignation.

A day later the Prime Minister launched his own attack against Newfield, accusing the developer of misusing project funds and calling him a racist.

The developers in a statement Thursday said, “The Kimpton Kawana Bay resort was launched in 2017 to great fanfare and until last fall enjoyed the government’s blessings.

“Some 92% of its condo units have been committed for purchase”.

“At the end of 2020, the government revoked the project’s long agreed-upon budget, citing unexplained “discrepancies”.

The statement went on to say that – “Further “reviews” of the budget never materialized. Earlier this spring, the government stopped processing Citizenship by Investment applications, which are the lifeblood of the Kimpton Kawana Bay budget.

“These erratic moves were accompanied by a string of resignations of government officials involved in overseeing the project.

True Blue’s request for arbitration concludes: “The Government has not been candid about its motive for the senseless destruction of a five-star resort project that has been bringing substantial benefits to the Grenada economy. The Grenada Government has much it cannot explain.”

During a general press session with selected journalists recently the Prime Minister again repeated his claims of misappropriation of project funds, claiming that the developers were seeking to recoup a 20 percent equity which had been put into the Kimpton Kawana Bay project and of trying to raise more investment funds than is needed.

True Blue and the other Claimants accuse the Government of a number of treaty breaches, including a breach of fair and equitable treatment, a breach of national treatment and the most-favoured nation clause, and an indirect expropriation.

The prime minister has said that an accounting firm, PWC, has been contracted to do a financial audit to find out where the money was spent and that an engineering company did an assessment of the construction cost and determined that there were discrepancies.

On April 30, local accounting firm PKF responded to a request from then chairman of the CBI programme Senator Christopher De Allie for details regarding the financial state of the project.

The letter said, “According to our audit and assessment of the accounting records for the latest period performed, April 30, 2020, regarding the project, we can confirm:

The PKF letter did not offer any figures.