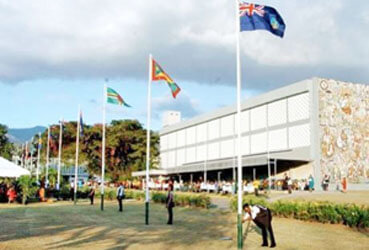 The operation of the University of the West Indies has come under scrutiny by a high-powered committee that was set up to review its performance over the years.

Headed by former President of the Caribbean Court of Justice (CCJ), Sir Dennis Byron of St. Kitts, the committee has submitted its detailed report which pointed in the direction of several major weaknesses in the structure of the institution.

The report is now attracting attention throughout the region as its contents have found its way into the hands of the media.

Today, THE NEW TODAY focuses on some of the governing bodies with UWI:

At the campus level, some Campus Principals have a similar group that deals with issues pertaining to the management of the business of the University at their respective campuses (the Campus Executive Management Team).

These Teams, comprised as they are of the most senior managers of the University, have the capacity to offer high-level advice on the strategic issues and significant operational and management matters.

The Commission heard that meetings of the Teams provide opportunities for information-sharing and clarifications on cross-cutting management issues. However, it was said that, in some cases, meetings were held on an ad-hoc basis and that it was difficult to assess whether the discussions and advice provided had a significant impact on decision-making.

The general view of those who spoke on this matter was that, in principle, the idea of having Executive Management Teams at both levels was a good one, but that their terms of reference needed to be clarified and their role formalised. For some, this meant that their purpose, functions, membership and procedures should be prescribed by Ordinance.

The Commission saw merit in this position and recommends the formalisation of the Executive Management Teams at both regional and campus levels as advisory committees to the Vice‐Chancellor and Campus Principals, respectively.

Brought formally into the management structure, these bodies would make valuable contributions to the University management system in a structured way with appropriate documentation of their deliberations, including Minutes of meetings.

The University Senior Management Committee would advise the Vice-Chancellor on such matters as:

(a) The strategic planning processes within the University, and the development of a robust, sustainable and adequately resourced draft Strategic Plan, as well as matters to take forward to the Council and its Executive Committee in relation to the University’s strategic direction.

(b) The annual plan for the University derived from the Strategic Plan, key performance indicators, operational plans and other plans as developed from time to time.

(d) Any proposed undertaking (academic, infrastructure or other) that would have an impact on the current or planned budget (capital and operational).

(e) Requests for financial support for the development and delivery of new Programmes.

(f) The University’s financial report against budget, including cash flow projections, reports of performance against the capital expenditure programme budget and a summary of investment performance.

(g) The effective implementation of major programmes and activities such as information and communication technologies and global engagement, ensuring that these programmes support the University’s strategic objectives.

(h) The need for new or revised policies relating to operational or management activities that have strategic impact.

(i) The introduction of cross-campus programmes, made more compelling in a post- COVID era.

The Campus Senior Management Committee would advise the Campus Principal on such matters as:

(i). The implementation of the University Strategic Plan as it relates to the campus.

(ii). The operationalisation of University-wide policies on the campus and budgetary matters, including requests for expenditure within the limits approved for the campus.

(iii). Issues pertaining to student experience and staff engagement, including health and safety.

In the proposed restructured arrangement, the USMC, through the Vice-Chancellor, would report directly to the Executive Committee of Council, providing a link between the main governing and management bodies of the regional University, thereby facilitating the monitoring of progress towards agreed goals and the making of adjustments to plans and goals necessitated by changed circumstances.

Similarly, any management matter of concern to the Executive Committee of the Councils (or any of the Council’s Advisory Committees) could be brought expeditiously through the Vice- Chancellor or Campus Principal to their respective Senior Management Committees.

At the Regional Level, the following membership is proposed:

At both the regional and campus levels, meetings should be held at least once per month.

The Vice-Chancellor or Campus Principal may delegate a person to chair a meeting in his or her absence. Minutes of the meeting should be kept. The University Registrar/ Campus Registrar should act as the Secretary to the Committee.

As the Chief Executive Officer of a complex organisation such as The UWI, the Vice-Chancellor is expected to guide the development of the institution’s strategic plan and the realisation of its stated mission and strategic goals.

He or she must also direct the development and implementation of University policies on academic and other matters and ensure that, in performing their functions, constituent parts of the University act in ways that are consistent with the University’s academic, financial and organisational goals, rules and policies.

The restructuring exercise arising out of the 1994 Report led to the devolution of the powers of the Council to Campus Councils, and Campus Principals became responsible to the Vice-Chancellor for maintaining and promoting the efficiency and good order of the University on their respective campuses.

This allowed the Vice-Chancellor to give more focussed attention to the “big picture” issues concerned with the well-being and development of the regional enterprise, such as the articulation of strategic goals and messages of the University, in order to build broad support for and ownership of the UWI’s aspirations among its many constituents – including Governments, staff, students and alumni, business, and industry and the general public across the region, and the enhancement of the reputation of the University.

The Vice-Chancellor must also:

The Vice-Chancellor remains the main representative of the University externally, undertaking important ceremonial and civic duties.

The broad scope of the Vice-Chancellor’s management responsibility over the University’s operation as a whole, accounts for the office holder’s multiple Chairmanships of University bodies at the regional level, and membership of all significant campus committees.

Statute 5 (5) (a) formally assigns the Vice-Chancellor the chairmanship of the Senate and of all committees of the Council and Senate, (subject to prescribed exceptions) but permits the appointment by the Vice-Chancellor of an officer of the University to chair any such committee.

Had the retention of the F&GPC been an aspect of the Commission’s proposed new governance structure, the Commission would have recommended that F&GPC should not be under the chairmanship of the Vice-Chancellor.

In the proposed restructuring arrangements, the Commission envisages that the Vice- Chancellor would play a pivotal role on the proposed Executive Committee of Council, acting as a bridge between the University’s governance and management domains, leading the institution’s strategic planning and collaborating with the Executive Committee in determining the University’s mission and major goals (with key performance measures) and, on an annual basis, identifying priorities to be pursued and the requisite funds.

The Vice-Chancellor and the Executive Committee would also collaborate in making such adjustments to plans as may be necessary based on current circumstances (for example, the impact of the corona virus pandemic).

It is envisaged that this interface between governance and management would be enhanced by the input of the Senior Management Team, renamed and formalised as proposed by the Commission, as an advisory committee to the Vice-Chancellor.