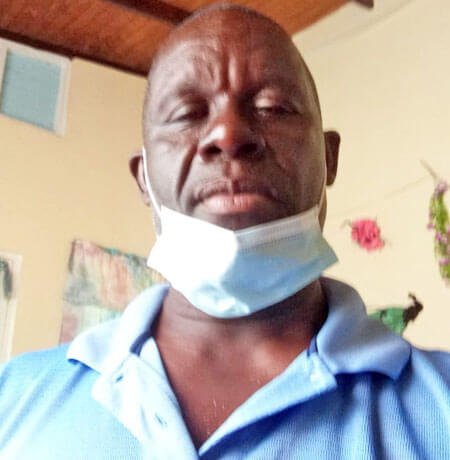 Jude Regis – wants answers to the U.S operation against him

A St. Andrew fisherman is still waiting on the Royal Grenada Police Force (RGPF) for an explanation over an encounter he had with a U.S Coastguard patrol boat in Grenadian waters nearly two weeks ago when he was detained on the high seas for about an hour-and-a-half and his small craft was searched.

Jude Regis who lives in the small village of Café in St. Andrew South-east, told THE NEW TODAY on Tuesday that he reported the incident to the Grenville Police station and was assured that the lawmen will get back to him.

“I haven’t heard from them yet,” said the fisherman who issued a statement on his ordeal to an officer at the Police station.

According to the fisherman, the policeman did inform him that U.S Coastguard personnel do operate deep within Grenada’s territorial waters without the knowledge of the local police force.

He said that another top cop indicated to him that the U.S Coastguard has permission under an arrangement with member territories of the Organisation of Eastern Caribbean States (OECS) to carry out operations in the area but has an obligation “to inform Grenada (that) they were in Grenada waters”.

THE NEW TODAY contacted head of the Community Relations Department (CRD) of RGPF, Superintendent Vannie Curwen on Monday on whether the Police High Command was aware of the incident and had knowledge of the U.S Coastguard presence in Grenadian waters.

Supt Curwen promised to contact his superiors and get back to us on the issue but up to press time he did not.

According to the fisherman who said he was scared and nervous after the run-in with the U.S Coastguard personnel, he spoke to a different policeman who reported that the U.S will engage in these kinds of operations on a rotational basis with some of the neighbouring islands like with Barbados and Trinidad & Tobago.

He said the officer told him that if the U.S Coastguard personnel had arrested him for an offense on the high seas then they would have to hand him over to local law enforcement officials to be processed for a court hearing.

“If they had arrested me then they couldn’t go anywhere else except Grenada with me,” he said the local police officer assured him.

“He was telling me that they claim that they have the authority to do it – is just that if they arrested me then they had to take me to Grenada for further process,” he added.

The fisherman normally lives in the United States but came back home to spend an extended time due to Covid-19 that is ravaging many states in America.

Regis told THE NEW TODAY that at first he thought that the U.S Coastguard boat was a trawler and became suspicious when it kept coming towards his small boat without any warning.

The fisherman ordered the other occupant on the boat to turn the small craft around and head back to the Grenville shores when it was chased down by the bigger boat.

He said that another smaller boat suddenly appeared and caught up with him about 5 miles outside of Grenville and took him in custody on the grounds that he was running away from them.

The boat was swabbed allegedly for illegal substances by U.S Coastguard personnel before releasing Regis and his associate.

According to the fisherman, the policeman in Grenville who took the statement from him did indicate that he would send in a report to his superiors on the incident but he did not expect anything much to come out of the incident.

The policeman said: “…He knows that the US does what they want and nobody in small Grenada can’t do anything much about it… we just do what they ask us to do and that’s it.”

The fisherman who is a U.S citizen disclosed that he is looking to visit the local U.S embassy at Lance Aux Epines to file a report on the incident.

“As a U.S citizen that is illegal what they did,” he remarked, and also added, “I am also thinking of finding out from a lawyer what action can I take.”

Correction: A previous version of this story misstated the last name of the St. Andrew fisherman.