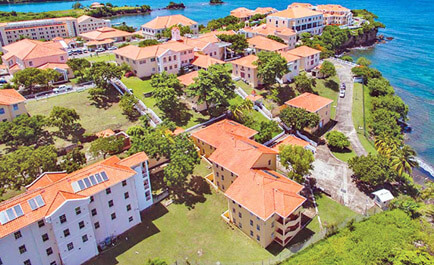 The internationally-acclaimed St. George’s University is located in the south of the island

THE NEW TODAY has received credible reports that a fire broke out at a generating power engine set owned by Grenlec at the St George’s University (SGU) at True Blue in the south of the island.

According to well-placed sources, the electricity company has three engines stationed at SGU and one of them is now out of commission due to the fire which took place around Friday.

A source familiar with the issue said that the three sets were placed at the university to serve as standby to service SGU in case of a major power outage in the area.

However, he stated that whenever the situation becomes critical, Grenlec will then put them on line to generate electricity as they are tied to the Grid.

He said that it could be an accident and not a deliberate act of sabotage to affect the engine that is now down and out of use.

The official pointed out that these small Caterpillar engines which have been outputting about 1.4 megawatts of electricity have been running constantly without stopping, following the breakdown of Grenlec’s major generating set that was purchased within the past year by the previous Keith Mitchell-led administration.

“They have been running – getting little rest (and) back on and things,” he said.

A team from the supplier of the major engine at Grenlec’s power plant at Queen’s Park has just left the island after flying into Grenada to help sort out the problem that was causing it to constantly trip.

“The engine is running right now,” said the source who added that ever so often the generating set “does trip off and so on.”

In recent months, Grenlec has been hit by financial woes and unable to find the funds to settle a pre-election agreement with the Technical & Allied Workers Union (TAWU) to provide for salary increases and improved fringe benefits to its estimated 160 employees.

The company had taken the decision to approach the government for permission to enter into a 15 million dollar loan with a local financial institution to help it take care of its financial troubles.

The newly installed Dickon Mitchell-led Congress administration took the decision a week ago to scrap a 25% discount on non-fuel charges on electricity bills of consumers that was enforced by the former Keith Mitchell government in order to help out Grenlec with its financial situation.