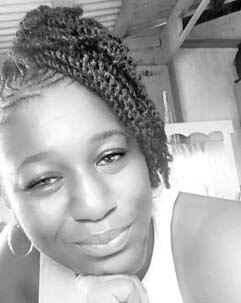 “… I will continue to speak about the issues affecting young persons. I am a single parent, I have three children and a grand child who I have to look out for”

That’s how Annichel Thomas, a young female political activist from Paradise in St. Andrew has described the decision of the ruling New National Party (NNP) government of Prime Minister Dr. Keith Mitchell not to renew her contract with the Central Statistical Office in the Ministry of Finance.

The young mother of three has been associated with the NNP for the past 8 years especially in the St. Andrew North-west constituency of Social Development Minister Delma Thomas.

In an exclusive interview with THE NEW TODAY, Thomas said that no one has been able to find fault with her job performance.

“I have been one of the best performing Field Officers in St Andrew’s. My last Appraisal for this year was an excellent one and I was recommended by Statistics for renewal,” she said.

According to Thomas, many people cannot believe that she was fired from the job given the amount of work done over the years for NNP.

“The situation is what it is – I’ve since moved on,” she remarked.

However, the young female activist said that she knew her dismissal was on the cards long before it actually happened.

“I didn’t sit and wait for them to fire me – as a matter of fact I have been working since June with another company so when the letter came, it wasn’t just like a shock because I was expecting it sometime now,” she remarked.

The single mother told THE NEW TODAY that Minister Thomas is fully aware of the situation involving her.

“From the minute time that the contract wasn’t renewed I called her and spoke to her. She has been aware of the situation since January of this year when I knew that my contract wasn’t going to be renewed.

“She (Minister Thomas) told me that she was told that my posting on Facebook was an issue. She said that they said that I have attitude problems.

The young activist has her own Facebook page and recently posted a number of things that caused ripples through the NNP.

She commented on the failure of Prime Minister Mitchell to deliver on the promises made on the eve of the 2018 general election at a massive rally at the Pearl’s airstrip in St Andrew that the country is about to see millions of dollars through the discovery of oil and gas in Grenadian waters through the Russian company, Global Petroleum Group (GPG).

Thomas said that Pearl’s is now “a Memorial Ground” that was used by persons three weeks ago to defy the NNP regime and illegally engaged in the playing of the Jab Mas.

The young female activist acknowledged that the issue of her attitude to be true to some extent as she is not one to just swallow anything thrown at her since she always questions things.

“If you tell me something is black and I see as purple, I will tell you purple and then you will have to convince me that it is black – some people have a problem with that. So, they say I have an attitude because I will question things.

According to Thomas, she cannot see how things like these could warrant a contract being terminated and concluded that the powers-that-be have decided to put politics over performance.

She also commented on the contents of her contract termination letter from the Acting Permanent Secretary in the Ministry of Finance, Mike Sylvester.

She spoke of being taken aback with the letter which requested her to surrender all documents and papers which came into her possession because of her work assignment.

“I would have to call them to find out exactly what it is they are asking me to surrender. I have no idea what documents because Statistics doesn’t give us any documents except contracts and appraisals. That is the only thing that I have that bore the Central Statistics letterhead or signature from the Ministry or Government,” she said.

Thomas did not give out much on whether she planned to join up with any political organisation in the near future against the NNP.

“I am sitting on the sidelines and looking at everything that will continue to happen,” she quipped.

“It doesn’t mean that I will not continue to speak about the issues affecting young persons. I am a single parent, I have three children and a grand child who I have to look out for,” she said.

According to the female activist she has a strong interest in those issues that will determine the kind of future that lies ahead for her children and grandchildren.

“Sitting down and thinking that these issues wouldn’t affect them, I will be naive. So I will continue to speak on whatever issues I think will affect my future, my children future or my grandchildren future,” she said.

Thomas believes that when the electorate vote for a government to get into office, they vote for an administration to bring betterment and to improve their lives.

“…We vote for a government to make our life better and if by simple asking for a government to do more than what they are doing or at least make alternative changes so that we will be able to better our lives, it warrants me getting sent home just begs the question – do they really care about young people?

The young activist pointed out that what the Mitchell-led regime has done to her clearly demonstrated to her that she was following them blindly for the last 8 years.

One of Thomas’ daughters is due to attend the T.A Marryshow Community College (TAMCC) in September after attaining 16 subjects.

The young female activist questioned the NNP government’s commitment to young people because just as her daughter was about to start her tertiary education, the contract of her mother is terminated.

“If you take my bread from me, you put their future at risk – that is how I currently feel,” she said.

“I feel that they don’t care about anybody but themselves. They seem to say if we can’t control you, we need to silence you at any cost,” she added.

According to Thomas, the NNP Government Ministers and Members of Parliament have seemingly adopted the attitude that they can do just about anything and get away with it because the main opposition Congress party is considered as too weak and ineffective to challenge them.

There is a feeling, she said, among them that they will continue to attract the votes of the young people because they have no competition where politics is concerned in the country.

However, she warned the NNP that it should be worried about the amount of their own supporters who might not show up at the polls on Election Day because they are not happy with the way things are going in the country but that a lot of them are afraid to speak out publicly.

“I spoke and you see what happened to me. A lot of people are silently saying that they wish the New National Party will deal with the issues that are affecting young people rather than just seem to be pushing things around,” she said.

The female activist stressed that the current administration is very misguided by adopting the position that persons in the Imani programme are now upgraded with a contract.

“Giving you a one-year contract doesn’t guarantee that you will be able to get a loan,” she said.

Thomas pointed out that a contract might guarantee some $200 or $300 more in pay but the individual is still back in what she termed “a modern day slavery”.

She also lamented the fact that a poor person in Grenada cannot do anything worthwhile these days from savings on their salaries especially as prices are rising but the pay cheque remains stagnant.

She said the only loans that young people have access to these days are those with high interest rates from Fast Cash and Axcel Financing “to do small things and nothing big”.

The activist stressed that the young people in Grenada want to own things like their own plot of land to build their own homes and want to feel a sense of being independent.

Thomas was also asked whether Prime Minister Mitchell had improved anything in the area of Youth Affairs after taking over the Ministry full time from MP for St. Andrew North-east Kate Lewis.

She said that he has not unveiled anything of substance for the young people in the country except to upgrade the Imanis with a contract.

She identified the needs for Jobs and Housing as the two most pressing issues foremost in the minds of young people, as well as the elderly in the society.

The 75-year old ageing Prime Minister Mitchell is said to be confident of another clean sweep at the polls whenever he calls general election, to make it three straight 15-0 victories over Congress.