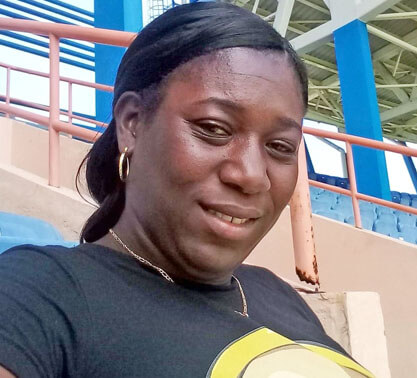 Annichel Thomas – her services are no longer required

A female activist who has run afoul of the ruling New National Party (NNP) administration in the Botanical Gardens in recent months has been fired from her state job.

A well-placed source told THE NEW TODAY that Annichel Alisa Thomas from the St. Andrew North-west constituency of Social Development Minister Delma Thomas has received a letter from government informing her that her services are no longer required as part of a survey team that was doing a special project by the Department of Statistics.

According to the source, the letter, allegedly written by Acting Permanent Secretary in the Ministry of Finance, Mike Sylvester asked Thomas to surrender all documents that came in her possession as part of the job assignment.

The letter also reminded the female NNP activist of the confidentiality of the information that she obtained as part of the survey team.

Thomas raised eyebrows almost a year ago when she was among a select band of young people to engage Prime Minister Dr. Keith Mitchell in a session held on the zoom platform from the Paraclete Government School and was openly critical of the flagship programme of the ruling party known as the Imani.

She told the Prime Minister that those young people who were given employment as Imanis did not have job security and could not obtain a loan from commercial banks and other financial institutions operating on the island.

The source said that the decision to sack Thomas has not come as a surprise in light of warnings given that she should refrain from making statements of a political nature in the public domain.

THE NEW TODAY was told that the ruling party was incensed by a posting Thomas made over the carnival holiday that was deemed to be offensive to Prime Minister Mitchell and the NNP regime.

She reportedly posted something on her Facebook page after several persons defied the order from government and played Jab mas on the abandoned Pearls airstrip two weeks ago amidst the coronavirus pandemic.

Thomas labelled the Imani programme as a form of “modern day slavery” and likened the Pearl’s airstrip as “a memorial site” where Dr. Mitchell had announced the big oil and gas discovery as a major vote catcher for the 2018 general election.

Two days before the general election, the Prime Minister announced a massive oil and gas discovery by the Russian outfit, Global Petroleum Group (GPG) which would bring in millions of dollars into the Treasury.

Dr. Mitchell called on Grenadians to return him to power in order to prevent his opposite number in the main opposition National Democratic Congress (NDC) party, Nazim Burke, the former Minister of Finance to lay his hands on the money to spend it.

The female NNP activist charged in her posting on Facebook that the Jabs used the Pearl’s airstrip two weeks ago to hold their “convention” there also like what the ruling party did three years ago.

Thomas is said to have indicated that she will make a statement on the issue at some point in time but not right now.

THE NEW TODAY was told that as a female political activist for the NNP, the information often gathered by Thomas through surveys often ended up in the hands of the NNP to help with its political work on the island.

She was working with government on a month to month basis at times even without a signed contract in her hands.

Since the start of the coronavirus pandemic, the ruling party has had to deal with growing unrest and a breakdown in law and order in the country by Grenada’s growing youthful population.

Prime Minister Mitchell removed St. Andrew North-east Member of Parliament, Kate Lewis as Minister of Youth and took over the portfolio for himself to become at age 75 the oldest Minister of Youth Affairs in the English-speaking Caribbean.