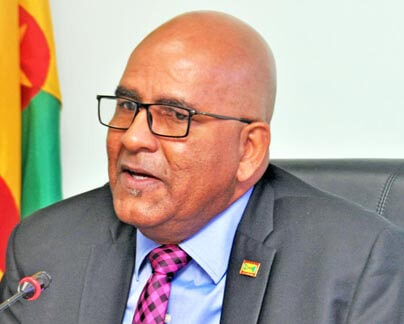 Farmers in Grenada are optimistic that they can have a better working relationship with newly installed Agriculture Minister, Peter David than his predecessor, Yolande Bain-Horsford, the current Member of Parliament for St. Andrew South-west.

A top industry official told THE NEW TODAY that Minister David has already sent positive signals that he would adopt a much different approach with them on the controversial issues of Merger of the two commodity bodies, the Grenada Co-operative Nutmeg Association (GCNA) and the Grenada Cocoa Association (GCA) and the liberalisation of the industry.

Minister David, the previous Minister of Foreign Affairs, has already held brief meetings with the Board of Directors of both GCNA and GCA since taking over the portfolio in October.

According to the source, the new minister is bringing what he called a new and different approach to the two thorny issues that have galvanised farmers in a stand-off against the ruling New National Party (NNP) administration of Prime Minister Dr. Keith Mitchell.

“We can’t say anything negative about him. We feel that he is very positive,” he said.

“The Prime Minister was pushing merger, merger but he (David) has agreed with us that it is not something that you could rush – you have to take time and allow the farmers to have their input,” he added.

Cocoa and nutmeg farmers have agreed at their Annual General Meetings held last year that merger could be looked at under certain conditions but liberalisation of the industry is not on their agenda.

The Mitchell-led government has appointed a steering committee to chart the course forward for merger and liberalisation.

During their meetings, GCA and GCNA farmers vowed to engage in protest action following the leak of a draft act for merger through the creation of a new body in which the Minister was empowered to appoint all the Directors and was given the power to grant licenses for export of the crops.

The draft was changed and provisions were then made for both the cocoa and nutmeg associations to appoint persons to sit on the governing Board of Directors.

According to the industry official, Minister David told farmers in meetings with them that he has come “with an open mind” to engage them.

He said the senior government minister has asked them to put together a list of items that they would like to see discussed jointly.

He stated that the Covid-19 pandemic has not provided the opportunity for much greater interaction between the minister and the two commodity bodies.

THE NEW TODAY understands that Minister David was due to meet Wednesday with a delegation from GCA to discuss the long-overdue payment of EC$1 million from government to cocoa farmers.

The NNP regime has announced a two million dollars package for GCA – one million as a grant and one million in the form of a loan.

There are reports that a similar figure has already been put at the disposal of GCNA.

As far as the loan is concerned, the industrial official indicated that GCA was able to provide government with some of its land as a form of security for the money.

He stated that there is an agreement “in principle” and the Mitchell-led government has already moved ahead and taken possession of one of GCA’s properties in Mt. Horne, St. Andrew where it had an old building as part of the deal for the loan.

The building has apparently been repaired by government for use as a pre-school in the area.

The source said that government has done this despite of the fact that there is no formal agreement between the two sides on the deal.

“We are not quarreling with them because we owe them some money. We didn’t make noise (with the takeover of the building) because we know we owe them – we are trying to work out a swap agreement,” he added.

The official described the proposal as one in which government will take some of the GCA land plus the old building “to match the debt that we owe you”.