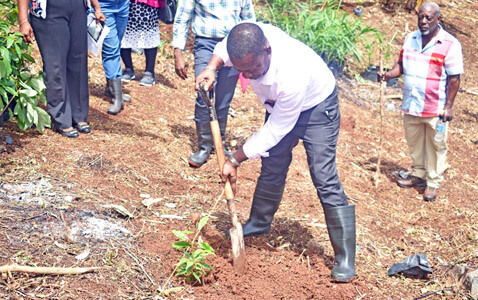 Minister of State with Responsibility for Agriculture and Lands, Fisheries and Cooperatives, Sen. Adrian Thomas plants a clove tree during the launch of the Spice Replanting Programme in St. David

Farmers are being encouraged to observe agronomical best practices, especially the use of correct planting distances to ensure the sustainability of the Spice Replanting Programme, as the Dickon Mitchell Government intensifies its efforts to increase the production of spices in the country.

With plans to have 100,000 spices under production around the island in the next 12 months, several spices were planted during the symbolic launch of the government’s Spice Replanting Programme at the St. David’s Roman Catholic School’s garden in Bellevue, St. David last week Tuesday.

Agronomist in the Ministry of Agriculture Allison Haynes has cautioned against overcrowded lands, stating that the school garden is expected to serve as “a model plot, not only for the students but also for the farmers.”

“So, here, when we lined this plot in preparation, we ensured that we use the correct spacing. So, for the cinnamon, we used a 12 x 12 spacing, 15 x 15 spacing for the clove, and 25 feet (for the bigger trees such as) the Nutmeg, Sapote, and Tonka Bean,” said Haynes, who explained that this is important because if you traverse around the island, you will notice that our fields are very crowded.”

This, she said, is because “people have small plots of land, and we tend to want to put everything in,” however, she emphasised that each tree crop has a specifically required space that they need to grow efficiently.

In an interview with THE NEW TODAY, Haynes pointed to the common practice by farmers, who although they may use the correct 25 feet spacing for a nutmeg tree, “somewhere along the line, between the 25 feet put in maybe a sour soup, cinnamon and, in no time, the entire field is crowded.”

“…I understand that farmers want to maximise the use of their land, and plant as much as they can because land space in Grenada is very limited but it is important for sustainability. So, we always have to bear in mind, if we want the project to be sustainable as students and farmers it is important that we use the correct planting distance. First you measure your land and determine how many plants could fit on the land,” she advised.

In addition, Haynes said that “it would also make it easier to harvest the spices if the correct planting distances are used,” adding that “if you plant in a crowded manner then all of the trees would grow very tall because they are competing for light and will be very difficult to harvest.”

The female agronomist expressed concern that in these circumstances “farmers tend to follow other practices that are not good, for example the clove might be difficult to reach so they might cut off the branch to harvest the clove and destroy the tree in the process.”

Before Hurricane Ivan in 2004, St. David had a number of various spices including, Nutmeg, Cocoa, Bois Bande, Pimento, Cinnamon, Sapote, and Tonka bean among others.

However, the loss of spice plantations, coupled with poor management of existing fields, resulted in a significant decline.

The government strategically selected St. David, which is the constituency of Prime Minister Dickon Mitchell to start the extensive spice replanting process in a bid to make spice production very prominent in the parish.

“This event today indicates the government’s serious attitude towards agriculture. This will be the first official garden of this project,” said Minister of State with Responsibility for Agriculture and Lands, Fisheries and Cooperatives, Senator Adrian Thomas, as he underscored the importance of starting the programme in St. David.

He said, “St. David is the King of Spice in Grenada, Carriacou, and Petite Martinique. Clove, Cinnamon, Sapote, Tonka Bean, and the likes were all known to be produced in St. David.”

According to Sen. Thomas, the project will not concentrate only on the traditional, and locally known spices, it will also allow for the introduction of new spices to Grenada as it is the government’s responsibility to ensure that the “Isle of Spice” is retained and maintained.

Last Tuesday’s ceremony saw Sen. Thomas symbolically planting a clove tree in the presence of the School Principal, teachers, students, and residents, who converged at the garden of the St. David’s Roman Catholic School to witness the transformational spice tree planting event.

“As we witness our Minister for Agriculture demonstrate, and lead the way in replanting our spices, we hope this initiative will invoke a drive in our young boys and girls to plant, nurture and continue to produce all of our different spices in Grenada,” she said.

Ministry officials also ventured to the not too distant Mt. Tranquil farm in St. David, where a series of spices were also planted.