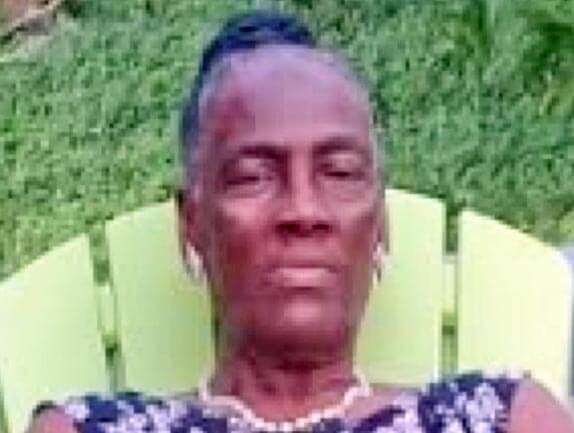 Cecelia Mungo – family members have identified her watch among the remains

Family members of an elderly woman who has been missing for more than a year have identified remains which were discovered Tuesday as belonging to Cecelia Mungo.

A wrist watch which was found with the remains was identified as belonging to the 78 year old woman who disappeared without a trace on January 7, 2020.

The decomposed body was discovered by Ian Julien, a resident of Mardi Gras who claimed that he was grazing his sheep when his dog started acting strange and on further investigation he saw the remains.

Extensive searches were mounted in the area last year as well as in other places where sighting of an elderly woman had been reported, including at Perseverance, St George’s however the area where the remains were found had never been searched.

The remains were found positioned between two stones in a small stream but not all of the body was recovered.

Family members of the missing woman are also upset with the police handling of the matter because a thorough search for more of the remains was not conducted.

According to members of the Mungo family, they had to carry out their own search on Thursday and were able to find a part of a hand. They say they will continue to look for the remainder of what they believe is their mother.

The family said when they contacted the police to continue searching they were told there was no transport available.

On Tuesday the police said forensic evidence had been collected for identification and it is being sent to a lab off island, either in Trinidad or Barbados, since Grenada does not have forensic testing capabilities.

There is no clear time line on when the results will be sent back to Grenada and according to the police it can be weeks or months.

A reward of $4000.00, put up by Mount Pure Mineral Water and Captain Harris Suites, had been offered for information on her whereabouts but no credible information was ever received.

Family members have also said they do not believe the remains were always in the spot where it was found on Tuesday.

The discovery was made about 20 minutes from the residence where the elderly woman was last seen before she disappeared.

They are also concerned about the manner in which they learned of the discovery of the human remains through media reports, before hearing from the police.

Early Thursday, head of the Community Relations Department of the Royal Grenada Police Force (RGPF), Superintendent Vannie Curwen told THE NEW TODAY that lawmen are still trying to determine whether the remains found two days earlier were that of Mungo.

“This has not yet been forensically determined,” he said of the badly decomposed body.

Days earlier, Supt Curwen said that he was not in a position to provide much information but acknowledged that Mungo “is the only person that we have had missing from that particular area.”

“…I am not in a position to say that the remains are hers. So, we have to give the forensic team an opportunity to do their DNA checking to confirm,” he said.

Supt. Curwen confirmed that “Cuban pathologists” were among the members of a team that visited the scene on Tuesday after the remains were discovered by a male individual from the village.

According to the senior police officer, he was not in a position to say if the police will be doing any of the forensic analysis locally or whether they would have to send it (forensic evidence) to Trinidad or Barbados and how long it would take to get the results back.

He pointed out that the “Royal Grenada Police Force does not have the capacity to do that (conduct forensic testing),” adding, “I don’t know where we going yet.”

The CRD head went on to express optimism that “at some point when all of the analysis is done and comparisons are made, we probably might be in a better position to say yea or nay”.

“…At this point I don’t know whether it’s male or female, I don’t know what clothing was unearth to make a comparison to what she was missing with,” said Supt. Curwen.

The emotional daughter of the missing elderly lady, Ester Mungo, who was called to the scene was unable to identify any of the particulars found by the police on the scene and was too emotional to speak with reporters who were covering the discovery of the remains.

THE NEW TODAY understands that the curiosity of a small brown puppy led to the discovery of the corpse in the area, which sources indicate is an area often frequented by persons tending livestock animals.

The dog owner, known in the village as ‘Pedro’ told reporters that he was in the area tying out his sheep when his dog led him to the corpse, after which he alerted the police, who were accompanied on the scene by shocked family members and several curious onlookers.

When Mungo went missing, she was reportedly exhibiting symptoms of Dementia, which is the loss of cognitive functioning – thinking, remembering, and reasoning – and behavioural abilities to such an extent that it interferes with a person’s daily life and activities.