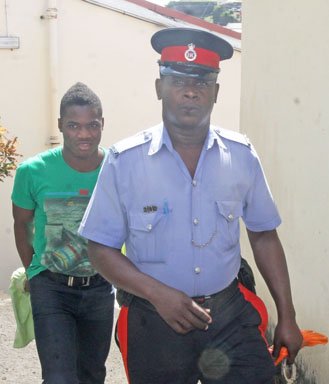 Akim Andrew - was remanded to the Richmond Hill Prison on Tuesday

The St. John teenager, who found himself on the wrong side of the law after being caught providing medical diagnosis and treatment without a license, has confessed to providing illegal services to more than 30 people in St. David and the eastern communities of St. George.

19-year-old Akim Andrew related this information to Acting Chief Magistrate Teddy St. Louis at the St. George’s No. 1 Magistrate’s Court on Tuesday, through his American-trained attorney Jerry Edwin, who was in the process of making a bail application on the occasion of his first court appearance.

Attorney Edwin’s bail application met with strong objection from the Police Prosecution team led by Corporal 147 Kerry Swan, who informed the court that the charges laid against Andrew “do not reflect the true core of what is unfolding here” and asked that he remain in custody at this stage.

“It is expected that we can have additional complaints and more charges being laid against him,” said Cpl. Swan.

The Acting Chief Magistrate took a decision to remand the accused to the Richmond Hill Prison until January 28.

According to an informed source, Andrew used a rented vehicle to roam the affected communities to randomly offer medical services to people.

Among his victims was a woman whose name was given as Wendy-Ann Cyrus and another was the mother of a sitting Magistrate. Both victims were present in court on Tuesday.

The source said that Andrew often recommended salt water and Panadol pills for various perceived ailments and had even prescribed Panadol pills after examination with a stethoscope and determining that one of them had an irregular heart beat.

Police finally swooped down on the teenager at his home in Lorreto, St. John on January 9, after receiving reports from a suspicious individual, who observed him offering his services at a health fair in the St. Paul’s area.

The 19-year old, who had just been released from prison after serving a 4-month sentence for stealing a desk from his former employer, has been involved in the illegal administration of medical services since his release from prison in November.

Following the news of his arrest this week, information began circulating on Facebook alleging that Andrew had also recently impersonated to be an insurance company owner and had managed to employ at least six persons who sources said had worked with him for about four months without pay before eventually leaving the job.

Sources said that there are persons who would have also unsuspectingly paid money into Andrew’s make-believe insurance company.

Andrew is said to have been involved in the Cadet Corps before becoming a police trainee and then quitting.

His arrest comes months after he was reprimanded and discharged for pretending to be a police officer.