Cletus St Paul in the middle of sex scandal 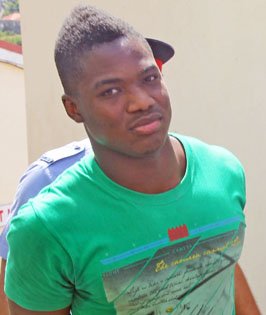 The St. John’s teenager who impersonated a medical doctor for months before the law finally caught up with him, has pleaded guilty to eight related charges when he made a second appearance before Acting Chief Magistrate Teddy St. Louis at the St. George’s No.1 Magistrate’s Court last week Tuesday.

Although 19-year-old Akim Andrew, did not complete his secondary school education, he was able to manipulate his way into several communities and homes of unsuspecting individuals, offering them various medical services including prescribing medication, holding health fairs, making house calls and even charging for his services in what has been described as a “crime of sophistication.”

The teenager, who was denied bail and remanded to the Richmond Hill Prison when he appeared before Acting Chief Magistrate Teddy St. Louis at the St. George’s No.1 Magistrate’s Court last week Tuesday, was arraigned when he reappeared before the Acting Magistrate one week later on four counts of practicing medicine without a license, two counts of Fraud by False Pretense and one count of driving without a license.

The offences were reportedly committed between January 13, 2020 and January 16, 2020, in the vicinity of Hope Vale, St. George.

Police were able to make an arrest after the mother and sister of a sitting Magistrate, who Andrew had attended to at their home at Hope Vale, became suspicious when they decided to pay him a visit at his Gore Street office, only to find out that it never existed.

The facts of the case as presented by Police Prosecutor, Corporal 147 Kerry Swan is that Andrew went about introducing himself to his clients as “Dr. Andrew” and lied about having an office in St. George’s and being a past student of the University of Denver in Colorado, USA, where he said he studied for four years and at the St. George’s University (SGU), where he said he studied for a period of two years.

Andrew also went as far as charging fees amounting to just under $200.00 for his services.

However, during last week Tuesday’s hearing, the mother and daughter of an affected family indicated to the Court that they did not wish to be recompensated and just wanted the matter to be over with.

Attorney Edwin, who opted to mitigate Andrew’s case on the next occasion, used the opportunity to indicate to the court his intention to mitigate for a non-custodial sentence for his client whom he believes has “shown tremendous talent.”

Acting Chief Magistrate St. Louis ordered a psychiatric evaluation to determine the mental health of Andrew, which will be key in determining what sentence should be handed down to him.

“He is not the kind of person that you send to jail. Jail is for someone else,” Edwin said expressing the view that “the Richmond Hill Prison was not designed for this type of offense, certainly not from this kind of convicted person, being 19-years-old and where there was no violence, no attempt to defraud persons of their money”.

The defense lawyer went on: “His (Andrew) fraud is limited to the health profession and as furious as that sounds I think only a psychiatrist could help us entangle the mind of this young man and that’s why a psychiatric evaluation and so that we can consider what is a just sentence in his case and I think there is enough here for this young man to not be given a custodial sentence.”

“There is something redeemable about him…and an opportunity exists that he can perform good, good deeds in society with the proper guidance…He clearly needs help, he is 19-years-old and the father of two infants and so he probably feels that whatever he has to do must be a good deed, in other words, I am a policeman because I am against criminal conduct but as a police man; however, I think that elderly people need to be in good health so, I am going to check their blood pressure but he is not a doctor; so, I think that a psychiatrist can help us go into the mind of this young man,” Attorney Edwin added.

The date set aside for his sentencing is February 6.

Date set for US$100 million lawsuit