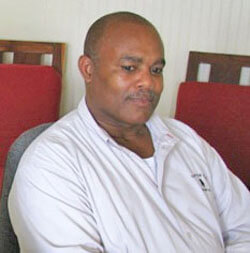 Fabian Purcell – no action taken against him

Senior civil servant, Fabian Purcell who admitted receiving unauthorised payment from the operators of the failed Shrimp Farm project in St. Mark has gotten away with what a senior government official described as a “slap” on the wrist following an investigation into the matter by the Public Service Commission (PSC).

The commission, headed by former Cabinet Secretary Beryl Isaac was forced to launch an investigation when THE NEW TODAY broke the story concerning allegations that Purcell had accepted bribe money to fast-track an application for the Shrimp Farm project that later failed and saw the developers skip the country with an estimated EC$54.2 million from the sale of Grenadian passports.

He said that Isaac is known to be upset over the fact that the manner in which the law is written prevented the commission from taking drastic action against Purcell due to fear that he can turn around and take them to court and had a good chance of winning the battle before a high judge.

He pointed out that the ruling New National Party (NNP) government of Prime Minister Dr. Keith Mitchell which has been in charge of the nation’s affairs for most of the past 25 years should look at revisiting the law in order to help stamp out corruption and wrongdoing in the public service.

“It is a sad case – it’s a real shame. The law has things tied up. There are lots of flaws in the whole system. The most they (PSC) could have done is move him,” he said.

According to the government insider, the Fabian Purcell matter was referred by the PSC to the office of the Attorney General for legal advice and the members were told that there is only “limited” action that can be taken against the former PPU head.

He said the commission had very little choice but to move Purcell out from the unit and into another area within government where he cannot engage in any such activities.

He admitted that the law is literally giving public officers a licence to commit criminal offences at the workplace and get away with it.

The official who hold a very sensitive job with government indicated that Grenada needs to revamp the Constitution in order “to prevent all these kinds of things” like the Purcell issue from happening in the service.

“We need to have constitutional changes so things like that could be avoided or if it is done it could be dealt with,” he remarked.

Purcell had admitted to THE NEW TODAY that he did not get permission from PSC to do the private work for the Shrimp Farm operators, as well as failed to pay the necessary taxes to the State for the monies that were collected.

Former Senior Operating Manager Construction/Engineering for the Grenada Sustainable Aquaculture (GSA), Manfred Soeffing, the company that was behind the failed Shrimp farm project confirmed the authenticity of a payment document concerning the financial transaction with Purcell.

Soeffing who was directly involved in the negotiations with the former PPU head said that the money was paid to Purcell as “a bribe” to fast-track their application for the St. Mark project.

When questioned by this newspaper back in 2019, Purcell did not answer whether he had permission from the PSC to engage in private work for the Shrimp farm and if he paid the relevant taxes to the government for the service rendered.

Purcell disputed that he had collected EC$7000.00 from the project developers as indicated by the wire transfer obtained by THE NEW TODAY but said it was only EC$1500.00 that was given to him.

He also rejected Soeffing’s assertion that it was “bribe” money or that he had engaged in any form of extortion to get the money paid to him by GSA.

Purcell claimed that he assisted the Shrimp Farm developers in doing a Topographical Site Survey for the outline planning application for the project as it was regarded as very critical for processing the application since the person who was assigned to do it, Venance Msacky, a former government surveyor, had been slow in getting it done.

He said that he used a Geographic Information System (GIS) software to do the work outside of government office and time and that had to be paid for.

Msacky disputed this, saying that he had done the work himself in keeping with his contract and had submitted the survey drawing to Kenrick Gabriel & Associates who was involved in the design work for the Shrimp farm.

A longstanding surveyor in private business expressed grave doubts about Purcell’s explanation and suggested that he was “very evasive and elusive” in giving answers.

“Suggesting that he produced Topographic details for a parcel of land using a GIS software is a blatant lie. You must first go out in the field to obtain the physical data then use a Software to extrapolate the field work – using the so-called GIS software is very inaccurate. An AutoCad Software is generally used for such exercises”, he said.

During the 1984-90 rule of the first New National Party (NNP) government of late Prime Minister H.A Blaize the entire staff of PPU was asked to resign following widespread allegations of corruption and wrong-doing with only two staff members not heeding the request – Crofton Hannibal and Cecil Frederick.

Over the years, staffers at PPU have been constantly accused of doing architectural drawings for projects and taking part in the approval process for a fee from persons who submitted applications for construction projects.