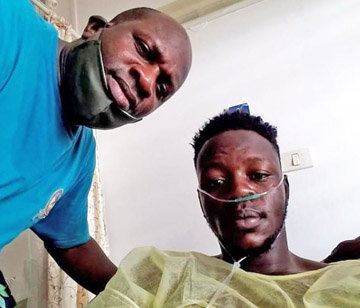 Jamal and his father at the St. George’s General Hospital

U.S trained attorney-at-law, Jerry Edwin has maintained that an unauthorised “Hollow-Point” type bullet was used by a member of the Royal Grenada Police Force (RGPF) last Sunday morning to shoot his client in Gouyave, St. John.

In an exclusive interview with THE NEW TODAY on Thursday, Edwin said that he has “medical evidence” that a Hollow-Point bullet exploded into five different pieces in the leg of 24-year old national footballer, Jamal Charles who was reportedly shot at his home by a Corporal of Police.

“There are five fragments of that bullet in the leg of Jamal Charles. He didn’t put it there himself,” he said.

Attorney Edwin was responding to a statement made Wednesday by Deputy Commissioner of Police, Franklyn Redhead who denied that this type of ammunition is part of the weapon inventory of the police force.

Redhead who is now serving as Acting Commissioner of Police for Edvin Martin who has taken leave of absence, accused the lawyer of engaging in “completely falsehood” information aimed at misinforming “the public in a particular direction”.

According to Edwin, the medical evidence from the St. George’s General hospital shows that the shell that was used was a 9mm type and that it was the encasement of a Hollow-Point bullet.

A military expert on the island told this newspaper that if what the attorney is alleging about medical evidence in his possession then the police might have a problem on their hands in explaining the type of bullet.

He suggested that a ballistic expert should be included as part of the police investigation into the shooting incident.

In making the damning allegation against the RGPF, the defense lawyer said that a normal 9 mm projectile fired by a police officer at a distance of 6 feet would have “fly through” Charles’ leg unless it did not hit a bone or some heavy tissue and then ricochet into the leg.

Edwin took issue with Deputy Commissioner Redhead’s decision to announce publicly without the conduct of the promised investigation that no Hollow-Point bullet was used in the Gouyave shooting incident.

“’That’s the quickest confirmation in an investigation that I have ever seen. It would have been a lot more appropriate for the Deputy Commissioner to say we will have to investigate it (allegation of use of Hollow-Point bullet).

“The fact is that a bullet fired from the gun of Corporal (Name withheld) expanded and exploded in the leg of Jamal Charles – very much so and typical in the fashion of a Hollow-Point bullet.

“If it were not a Hollow-Point bullet that bullet would have gone clean through the young man’s flesh because it did not strike a bone so the police should not jump to conclusion”.

According to Edwin, he understands the rationale over the decision of the island’s Number Two police officer to come out with such a quick denial as this matter raises serious concerns about a suspicious bullet that might have been used by a police officer to shoot the national footballer.

He said: “I understand well the concern by the Deputy Commissioner of this horrible news that Hollow-Point bullets are available to members of the Royal Grenada Police Force”.

“Where can they get it? What kinds of controls are in place in the arsenal in the ammunition departments of the various police stations around our country?

“That’s what the investigation should include. Anybody who is jumping to conclusion is unfortunately the Deputy Commissioner and the leaders of the Royal Grenada Police Force”.

Edwin charged that what the RGPF should be doing in the circumstances is to include his allegation on the type of bullet as part of their investigation into the shooting of Charles.

The lawyer described as nothing but “a knee-jerk response” from Deputy Commissioner Redhead and that this now “speaks to a greater problem and it may be that the Royal Grenada Police Force has no control over the bullets that are used by its officers.”

“…We know for sure that Hollow-Point bullets are available to the para-military force in Grenada – that is the RRU (Rapid Response Unit) and the SSU (Special Services Unit),” he said.

Edwin told THE NEW TODAY that Redhead could be speaking the truth that this type of bullet that went into the leg of Charles is not in the RFGP’s inventory.

Edwin added that the medical evidence obtained points to no exit wound from the bullet that hit the national footballer.

According to the attorney-at-law, anyone with some kind of paramilitary training will know that this is “an anomaly” because if a shooter is standing no more than 15 ft. with a 9mm bullet from a target and the weapon is discharged into the leg of a human being and it does not go through the leg then something is wrong.

“That bullet didn’t first strike any other object so that the head of the bullet was flattened so that it exploded – and maybe even so, it would have missed the young man as there was nothing between the gun barrel and Jamal Charles’ leg,” he remarked.

“How come the bullet is in five pieces? How come there is no exit wound? So the question is where and how did Corporal (Name Withheld) obtain this particular bullet to load into the magazine of his RGPF issued firearm. And more importantly – are there other officers of the Royal Grenada Police Force with this type of deadly arsenal? That is the question.

Edwin told THE NEW TODAY that he is maintaining his position on the issue and wants those important questions to become part of the investigation into the shooting of his client.

“My sources tell me that Hollow-Point bullets are available here in Grenada,” he said.

The attorney confirmed that the national footballer was released from hospital on Wednesday afternoon and is now back in his hometown village of Gouyave.

He said that Jamal is due to undergo another x-ray in a couple of weeks so that the medical team at the hospital can track the movement of the fragments of the bullet in the leg and in another month, he should start physical therapy.

“While he (Charles) has some movement in the knee and the lower part of the leg, he cannot fully bend the knee. The young man says he still has that deep fear that he may no longer be able to participate in sports – you can see the anxiety in his eyes, see his expression of disbelief that this has happened to him,” said Edwin.