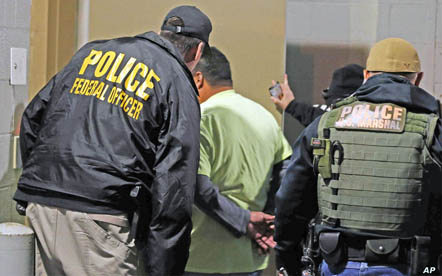 A former police chief has said that the Keith Mitchell-led government should take the lead and officially inform Grenadians and not be secretive about the arrival of criminal deportees from the United States given the State of Emergency that was imposed on the island due to the coronavirus.

The retired police head said that this is not normal times and nothing is wrong in releasing the information to comfort the population that the authorities are on top of the situation.

He said the normal practice is for the Criminal Investigation Department (CID) and the Criminal Records Office (CRO) of the Royal Grenada Police Force (RGPF) to be furnished in advance with information long before the deportees are sent back to Grenada.

“We will have all the records on these deportees – for that matter they will (get) all of their fingerprints and possible photographs. That is the standard practice,” he told THE NEW TODAY.

“I know that we did that for over twenty years in CID and it continues. We usually have the information of these deportees coming (back home) months before the due date,” he said.

According to the ex-police chief it makes no sense in the current situation for the authorities to hide from the public the presence of the criminal deportees who are sent back to Grenada.

“I don’t think that the deportees name should be released but they can say the amount that have arrived,” he remarked.

A senior lawyer familiar with the deportation procedures said that Washington will inform the Ministry of Foreign Affairs about the sending back of Grenadians to the island.

There has been no official release about the deportees by government but Assistant Commissioner of Police (ACP), Jesmon Prince is quoted as saying that two deportees were processed last Thursday at the international airport on arrival back in Grenada.

Prince described one as a 67-year old man who had served 17 years in prison for rape and the other was 32-years with a conviction for causing harm.

The senior police officer said that the two men were accepted back on the island in keeping with the Covid-19 health protocol, which provides for them to do a rapid test for the virus and placed in state provided quarantine facility for 14 days before they are allowed to integrate into the society.

THE NEW TODAY understands that one person who is known to be in custody in the United States and awaiting deportation to his homeland at the end of his prison sentence is an individual from Mt. Moritz who was convicted for a gruesome murder in Texas.

Jamaica has been the Caribbean island most affected by Washington’s policy to deport criminals including several who have been affected by COVID-19.

The U.S plane which touched down at the Maurice Bishop International Airport (MBIA) last week Thursday had passed through Jamaica to drop off 28 deportees.