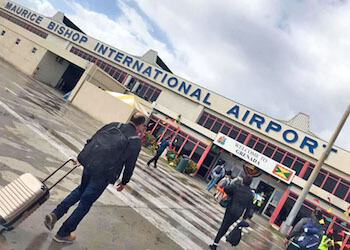 Passengers arriving at the MBIA airport at Point Salines

A former Chief Executive at the Maurice Bishop International Airport (MBIA) has warned Grenadians to pay particular attention to the decision taken by the Keith Mitchell-led government to commit the island to a massive EC$185 million loan to upgrade the facility.

“I am predicting default (of the loan),” said the official who did not want to be identified given his public sector job.

The loan is coming from China’s Exim Bank, a government-controlled entity, to build additional runway facilities, roads, foot brides and interior upgrades such as escalators and elevators at MBIA.

In an exclusive interview with THE NEW TODAY, he said that the money taken from China is not an airport loan but one that the ruling New National Party (NNP) administration of PM Mitchell is taking out to do work on the airport at Point Salines.

According to the official, the airport “was barely sustaining itself with a little bit of profit” more than the other state-owned enterprises in Grenada and would be hard-pressed to commit to a Chinese loan on its own.

He said that he looked at the legislation governing the operation of MBIA and it does not make any provision for the Grenada Airports Authority (GAA) to commit itself to loans of such magnitude.

He also said that the airport as a statutory corporation cannot contract such an external loan from a company or a body that is a satellite of a sovereign foreign state.

“How you doing that? It must be the state (of Grenada) to do that,” he remarked.

The official is not optimistic that the island would be able to service this massive loan from the Chinese in the aftermath of the coronavirus pandemic as the Mitchell regime will be hard-pressed to put additional taxes on the population to meet its financial commitment to China.

He is forecasting that China will not be pushing for immediate repayment of the loan as MBIA would be treated as a strategic asset for the Chinese to gain access into Latin America for trade and investment and obtaining material to keep its factories running.

He said: “Once the project is completed the assets of the airport would be significantly enhanced and improved in value. The Chinese would be improving our airport asset knowing that we can’t pay for it – we can’t sustain any payback but the Chinese would be getting a world class standard asset that they will take control of for their objectives.”

The official accused PM Mitchell of “selling out the country” to the Chinese by going into a massive loan that will virtually be impossible to service given the current worldwide economic and financial outlook.

He said that in years to come when historians “analyse his (Mitchell) contribution and non-contribution to economic and other development in Grenada”, the current Prime Minister would go down in history “as the

worst and the most sell-out, and unpatriotic fellah who come through that office”.

“This man is not a patriot. This man has no loyalty to anything. Principle and honour is absent in this (Prime Minister), he added.

The official accused Prime Minister Mitchell of “selling out” on the altar of money as the plan is to get funds “to run around and to lay the foundation for an election called to improve his chances to remain in office”.

This is obvious reference to the opposition mounted by the young people about five months ago to the Coronavirus protection bill that was pulled back from Parliament and against the beating of Evan Smith in Fort Jeudy by a white couple from Europe.

The official is predicting an early poll in Grenada as PM Mitchell is mindful that all his colleagues in the Eastern Caribbean who called elections during this pandemic period did win at the polls.

“He don’t want to lose the opportunity of pandemic. He is planning it (election),” he said.

According to the official, PM Mitchell and NNP are way ahead of NDC in the political game by taking in front with the current series of Town Hall meetings being held at the various constituencies around the island.

Dr. Mitchell is the most successful Grenadian leader at the poll winning five elections in the past 25 years but leaving behind a massive national debt of over EC$2.6 billion through a massive borrowing and spending spree on a number of questionable projects.