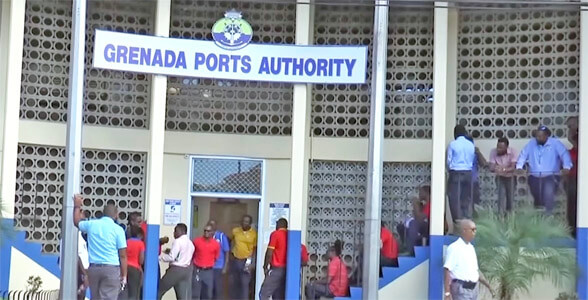 A former Commissioner of Labour has accused the Technical & Allied Workers Union (TAWU) and its President Senator Andre Lewis of being engaged in an illegal strike action on the St George’s Port that is now crippling the public especially private sector businesses that have millions of dollars in goods under lockdown on the island’s main port of entry.

Speaking to THE NEW TODAY on Friday, the labour official said the union and workers failed to “exhaust the dispute procedure” in calling a strike in what is an Essential Service and in breach of the Labour Relations act.

“The Ministry of Labour should advise the trade union to get the workers back working while the dispute procedure is activated,” he said.

The former high-ranking government employee suggested that the new Congress administration of Prime Minister Dickon Mitchell should remind TAWU of its responsibility by law to get the workers back on the job and to follow the procedures on strike in an Essential Service like the Grenada Ports Authority (GPA).

“Get the workers back on the job and after that we discuss the issues. It is in the union agreement with the company that there is a procedure to resolve disputes,” he said.

The workers took strike action on Monday after GPA fired a female employee whom it accused of breaching the work ethics.

The employee has been dogged over the years with a number of allegations and just before the June 23 general election and change of government was the subject of an investigation for alleged wrongdoing on the port.

Referring to the port as “a strategic area where the government collects its revenues”, the former Labour Commissioner pointed out that TAWU should “follow the dispute procedure where we go to conciliation and if the minister cannot settle it we appoint arbitrators to give a final judgement on the matter on facts.”

“The first thing that they (TAWU) (have) to do is to get the workers back on the job and then come around the table,” he remarked.

The former high-ranking public officer took issue with statements reportedly made by Sen. Lewis that he had only joined the strike after the workers took industrial action by withholding their labour from GPA.

He described Sen. Lewis’ behaviour “as the tail was wagging the dog” since it is now apparent that “the workers went on strike and the union went in and followed them.”

“The union (is) supposed to get the workers back on the job, inform them that it is an Essential Service, go back on the job and take the dispute to the Ministry of Labour. It is as simple as that.”

“If the Labour Minister and the Minister of Labour cannot handle it then the minister has the authority to appoint Arbitration – it is not voluntary, it is compulsory. If the matter cannot be resolved the Minister can set up an Arbitration panel to look at the facts and come with a final determination which is legal and binding. Anything that comes from the Arbitrators is legal and binding. There is no need to go to court and so, as this is what the law says.”