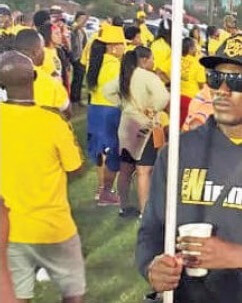 A Trinidad-based Grenadian-born Reggae/Dancehall artiste has added his voice to those who have spoken out against what has been labeled “political discrimination” at the hands of the Keith Mitchell-led New National Party (NNP).

Speaking in an exclusive interview with THE NEW TODAY on Tuesday, Peterson Greenidge, who goes by the stage name ‘Prince Napthali, shared how he faced discrimination during the 2022 general election cycle, which climaxed on Thursday, after approximately five (5) weeks of intense campaigning, and political events across the country.

According to him, things were already in place for him to perform on the platform of the New National Party’s youth rally at the Plains Playing Field one (1) week ago, showcasing some major local entertainers, including Veteran Entertainer Elimus ‘Inspector’ Gilbert, Randy Isaac, and Sheldon Douglas, and singing sensation Valene Nedd, with Jamaican Reggae Dancehall stars, PopCaan and Jamiel, as the main acts.

“I was to be on that show,” Prince Naphtali disclosed, explaining that the organisers had, however “canceled having me after certain pictures, and videos were released to the public” depicting his association with Dickon Mitchell, and other members of the National Democratic Congress (NDC).

“As an artiste, and as a citizen of Grenada as well, I see that we face political discrimination, automatically off the bat, if you support one political party because I was literally told that they wanted to book me but because I am supporting NDC, we did not have you on our show,” he said.

“So, they knew that I was giving support to Mr. Dickon Mitchell, and because of who they are, they literally took me off that show,” Prince Naphtali quipped, citing the National Anthem, which states in part that “together we aspire, build, and advance.”

The outspoken Reggae Dancehall sensation went on to emphasise that “these are not just common words (and) should be embedded in us that together, not individually, but collectively, each one of us, we achieve, we aspire together…from one level to another, we all get that done together, we advance.”

“And, this political game that we are caught up in right now, has affected that, and is taking away the opportunities from plenty of people because look, it was released to the public that certain ministers from the same NNP gave ambassadorship to certain people in the cultural industry because they are in support of NNP, but what about us who are literally representing the country internationally and (are) probably way bigger in the music industry than what these cultural ambassadors are doing?” he contended

Related:  Gemma Bain-Thomas could be contracted to help

“That shouldn’t be. This is a big issue…There shouldn’t be political favours, or that because of political affiliation one (1) can be favoured or less favoured. That is madness against the citizens of Grenada, and the young people of Grenada, and I Prince Naphtali do not endorse that, and I don’t think the people who I am in support of, which is Mr. Dickon Mitchell would discriminate against someone in the music industry because he is supporting NNP.

And, the people of Grenada are living in poverty because of political discrimination by the ruler of the NNP, (which has been in power for the most of the last 30 years) and that is total madness,” said Prince Naphtali.

The entertainer, who is originally from Belmont, St. George, travelled to neighbouring Trinidad and Tobago in 2014, where he made his name in the Reggae/Dancehall industry as a part of the ‘Trinibad’ movement, which is the newest style of Dancehall music originating in the twin-island republic, featuring artistes who have gained international recognition, and support.

Prince Naphtali, who is currently on tour, was booked as a Trinidad overseas reggae artiste to perform at the recently concluded finals of the Mega Force Promotions Pure Grenada Football Competition at the Grenada National Stadium.

During the last political rally of the NDC in St. David on Sunday, Prince Naphtali met up with Trinidad reggae singer Brendon ‘Isasha’ Young, who was booked by the political party to perform, and had invited him to join the performance on stage, where he shared his talent with the crowd.

Prince Naphtali was recently signed to the Texas-based record label, the Energised Management Group (EMG), and has performances booked for Jamaica, The Bahamas, and Texas in the coming weeks, with a catalog of songs including Born Winner, Nah Trust People, Give Thanks, and Mr. Bossman.