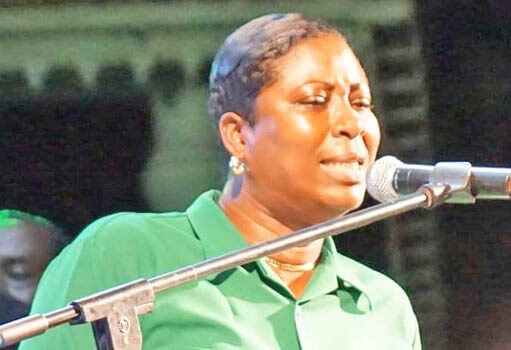 Education Minister Emmalin Pierre has come under a barrage of criticisms from trade union leaders over disparaging remarks made against lecturers at the T.A Marryshow Community College (TAMCC) on the political platform of the ruling New National Party (NNP) administration.

An executive member of the Grenada Union of Teachers (GUT) spoke out against what has been described as an “assault on workers” who exercise their constitutional right to protest against the government’s actions whenever there are industrial disputes.

The trade unionist said he was extremely saddened with the remarks on the issue by the senior member of the Cabinet of Ministers.

“What is so sad about those comments is that Victor Phillip, the (NNP) Caretaker for St Patrick West sat there as a former lecturer and said nothing.

What is even sadder is that his wife is a current lecturer at TAMCC. What a shame,” he told THE NEW TODAY.

Speaking at a public meeting of the ruling party at Snug Corner in St George North-east, the Education Minister said she had received information that some lecturers at the college were offering students good grades as bribes to join them on the picketing line against government.

Several TAMCC students joined in the protest action which began a few weeks ago and were seen with placards in hand supporting the lecturers’ cause.

According to Minister Pierre, she received a phone call from someone outside of Grenada raising the concern involving the students and she announced plans to launch an investigation into the matter as “we cannot afford to affect the integrity of our only community college and no lecturer should be allowed to get away with something like that.”

The President of the Public Workers Union (PWU), Brian Grimes on Monday joined the TAMCC protest in solidarity with his counterpart Jude Bartholomew, leader of the Grenada Union of Teachers (GUT).

In an exclusive interview with THE NEW TODAY, Grimes said: “There is always an assault on those workers who are utilising their constitutional right to stand up for their rights…instead of the Minister of Education being contrite with this matter, knowing that the workers are owed, she went on a political platform, and attacked the integrity of workers who are under the bargaining unit of the GUT – this is very sad.”

“But it does not surprise me. I have seen this movie before. I saw it in 2018 when students who were very empathic to teachers, went out and protested with them regarding pension, and the said Education Minister stated that they brainwashed the students – Form five (5) students who can think on their own.”

“Now, in 2022, we have a similar modus operandi where there are accusations of bribery… it was highly irresponsible.”

Grimes called on Minister Pierre to “retract” her “misguided” statement “forthwith”, claiming that it was made “without evidence.”

The PWU boss echoed sentiments expressed by the GUT leader that the Education Minister’s statement has added “insult to injury” and was “irresponsible, degrading, and an insult” to the lecturers, and students, at the college, with the potential to compromise the credibility of students’ grades.

Grimes expressed the view that “there is a fundamental flaw in the DNA of the New National Party administration when it comes to workers in this country,” noting that among the key issues is the fact that “there has been no salary increase for our workers for over 10 years.”

“I want people who are observing this, trying to decipher what’s happening at the TAMCC, to contemplate working for the same salary without a shift for inflation for 10 years in a period where inflation is at an astronomical level when you compare statistics to modern times,” he said.

Grimes argued that with the growth of the college over the years, and the “diversification of courses and things of that nature, the responsibilities of the workers have been growing while their salaries have stagnated.”

“They just don’t like to empower workers…we don’t know of any arguments that can be advanced for not paying workers in the lone tertiary institution salary increases for 10 years. How can they justify this? It cannot be justified. You don’t do that to people,” the PWU boss charged.

“The St. George’s University (SGU) gave US$30 million, which amounts to approximately EC$82 million grant money, and you telling me, for a lone tertiary institution named after a national hero, T.A. Marryshow, they cannot give a subvention to the college to rectify some of the longstanding problems,” he contended.

Grimes also used the opportunity to chide the government on its “lack of interest in our lone tertiary institution,” pointing out that apart from the money issues which he considers as being “critical now in terms of keeping workers motivated and productive as possible and giving them a living wage,” there are also occupational safety and health issues.

He spoke of the Six Roads TAMCC campus in Carriacou being in a “deplorable condition,” and “not fit for learning.”

“For years the campus has been like that, and you listen to this administration talking about how they love education but where is the action to prove it?

According to Grimes, the workers at TAMCC have been complaining that “every opportunity for promotion seems to be stifled based on technicalities” noting that “workers have been performing in positions for an extended period proving that they can do it, going above and beyond, and when it comes to putting pen to paper to promote them, there is always some technical issues.”

The PWU President sees this behavior of the authorities as helping to add “to the demotivation of workers.”

Grimes charged that the “management of TAMCC is operating at snail’s pace regarding the grievances” of staffers and that there is a “high dropout rate at the college right now,” as the services diminish “based on the negligence of central government (and) there will be frustration among students.”

“It’s hunky-dory, business as usual, while the problems continue to grow and grow… so right now the workers are outside, and it’s not going to improve until there are solutions placed on the table and enacted. Both unions are out there, and we will continue to go out there until we get some form of redress so that workers can be paid properly and be treated with respect,” he said.

In a previous interview with THE NEW TODAY, the PWU boss called on the agents of the government to discontinue the use of political platforms to speak ill against the labour movement.